Hurricane Ian isn’t a once-in-500-years flooding event, it is the New Normal. And Gov. DeSantis' policies in Florida are making it worse. 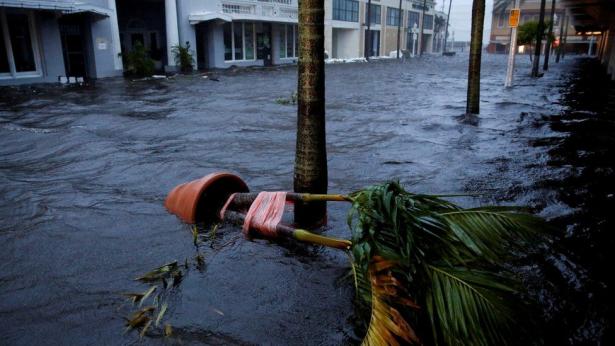 Ann Arbor (Informed Comment) – Florida Governor Ron DeSantis has abruptly been handed an honest-to-God crisis that may distract him from his usual antics of trolling Venezuelan asylum-seekers, firing elected prosecutors who disagree with him on coerced childbirth, and firing scientists who wouldn’t manipulate state COVID statistics for him.

DeSantis, who hates people who know what they are talking about the way the devil hates holy water, shouldn’t be relied on for either science or history. The flooding caused by Ian could well be the worst for thousands of years. The most recent warm era in the north Atlantic, the medieval warming period, around 900-1200, seems to have seen ocean surface temperatures that were still colder than today’s. It is our very warm surface ocean temperatures that feed monster storms such as Ian. Moreover, it isn’t going to be something that only happens once in a half-millennium. Massive hurricanes and floods are the new normal caused by humans burning petroleum, coal and fossil gas, which puts billions of tons a year of the dangerous heat-trapping gas, carbon dioxide, into the atmosphere.

This is the same DeSantis who signed a bill into law that forbade Florida municipalities from getting off fossil fuels and turning to wind and solar instead by restricting land use, banning fracking, or interfering with pipelines. The law was supported by the Florida Natural Gas Association. Sunny Florida, which could put in as much solar power as California if its government wanted to, is instead locked into getting 70% of its power from dirty fossil gas, which produces the CO2 that heats the oceans and calls forth monster storms like Ian.

This is the same DeSantis who according to the Orlando Weekly “wants to prohibit state investments that use ‘environmental, social and governance” ratings, which can include taking into account impacts of climate change.'” Kartik Krishnaiyer at The New Republic argues that although DeSantis has in the past paid lip service to acknowledging human-caused climate change, in recent years he has done nothing to abate it or prepare Florida for the ever worsening storms and sea level rise it will face.

So let us underline this policy. The governor of the most vulnerable state in the union to the climate emergency is pulling $250 billion of state investments out of corporations that have a social conscience, including ones working to stop the worst effects of climate change. His rationale? These companies are “woke.” DeSantis wants to be president so much that he is playing to the MAGA crowd in the Republican Party with these self-defeating stunts, mortgaging Florida’s future to his political fortunes. It is the textbook definition of corruption.

The National Oceanic and Atmospheric Administration, which is full of people who know what they are talking about, explains the link between hot, tropical ocean water and hurricanes. They conclude, “Recent studies have shown a link between ocean surface temperatures and tropical storm intensity – warmer waters fuel more energetic storms.”

NOAA notes that hurricanes subside when they go north over colder water or go inland, and lose the fuel of their hot water base. One problem we are now seeing is that the ocean water up north is no longer as cold, and there are more and more warm-water anomalies where water is 80 degrees F. (26.6C) or more so hurricanes can remain strong all the way up to New York, Boston and even Newfoundland. The water off Newfoundland used to be cold. It isn’t that it never got hit by a storm, but in the future the impact will be more severe and more frequent, according to the CBC.

Here is how a meteorologist explained the vast destruction that befell Newfoundland from Hurricane Fiona recently:

If Newfoundland is in trouble, you know Florida is under the hammer.

You know it. Ron DeSantis, one of the dumber and more sinister politicians now vying for the presidency — so that he can ruin the whole country the way he has ruined Florida — doesn’t.