Who Knew Tumors Have Their Own Microbiomes? 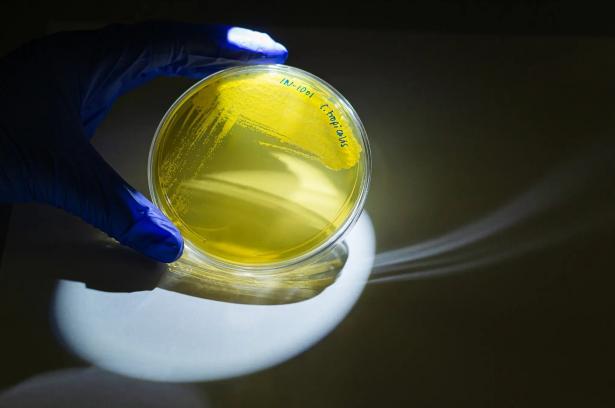 A culture of Candida tropicalis, a type of yeast, isolated from adenocarcinoma-associated mucosa in the lab of Iliyan Iliev, an immunologist at Weill Cornell Medicine in New York, Credit Jennifer Conrad and Iliyan Iliev

Look up an image of a tumor on Google, and you’ll probably end up with a brightly colored cluster of cancer cells on a drab background of healthy tissue. But for Lian Narunsky Haziza, a cancer biologist at the Weizmann Institute of Science in Israel, the picture looks very different. A tumor may also contain millions of microbes, representing dozens of species.

“I think this is an ecosystem,” she said. “It means the cancer cells are not alone.”

Scientists have long known that our bodies are home to microbes, but have tended to treat tumors as if they were sterile. In recent years, however, researchers have laid that notion to rest, demonstrating that tumors are rife with microbes.

In 2020, several research teams showed that tumors are home to various blends of bacteria. And on Thursday, two studies published in the journal Cell found that tumors are also home to many species of fungi.

This so-called tumor microbiome is proving so distinctive in each type of cancer that some scientists hope to find early signs of hidden tumors by measuring the microbial DNA they shed into the blood. And some research hints that microbes may make tumors more aggressive or resistant to treatments. If that proves to be the case, it may be possible to fight cancer by attacking a tumor’s microbiome along with the tumor itself.

“We need to re-evaluate almost everything we know about cancer through the lens of the tumor microbiome,” said Ravid Straussman, a cancer biologist at Weizmann who collaborated with Dr. Narunsky Haziza on one of the new studies.

Over the past two decades, scientists have charted the microbes in the human body by fishing for their DNA in mouth swabs, skin scrapings and stool. These surveys have identified thousands of species that live harmlessly in a healthy person, totaling some 38 trillion cells. Many organs once thought to be sterile turned out to have their own microbiomes.While researchers explored the healthy microbiome, cancer remained mostly terra incognita. No one knew if the millions of cells that make up tumors provided another habitat where microbes might live.

In 2017, Dr. Straussman and his colleagues stumbled across bacteria living inside pancreatic tumors. They made the discovery while puzzling over how some tumors managed to resist a chemotherapy drug. It turned out that a species of bacteria that could block the drug was living inside them. 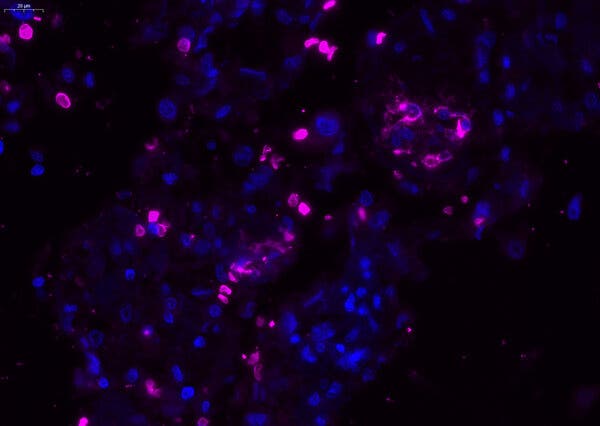 Fungal and immune cells in human breast cancer, with the fungal cells stained in pink and the human cell nuclei in blue. Credit...Deborah Nejman and Nancy Gavert

That finding led Dr. Straussman and his colleagues to do a large-scale survey of bacteria in more than 1,000 tumors from seven kinds of cancer. In 2020, they reported finding bacteria lurking in all seven types.

Around the same time, a team of researchers at the University of California, San Diego, carried out their own search using a huge database of DNA gathered from different types of cancer in the early 2000s.

The project, called the Cancer Genome Atlas, was intended to help scientists find mutations in tumor genes that make cancer cells grow uncontrollably. But the San Diego team recognized that the raw data might also contain DNA from bacteria in the tumors.

Unfortunately, that meant sifting through the six trillion genetic fragments in the atlas for snippets of bacterial DNA.

“It’s like trying to find needles in a haystack, when there are more straws of hay than there are stars in the Milky Way,” said Gregory Sepich-Poore, a member of the team.

The search took years, but it paid off. Dr. Sepich-Poore and his colleagues found that a small percentage of the DNA fragments in 32 types of cancer belonged to bacteria, not humans.

After the researchers published their study in 2020, they joined forces with Dr. Straussman’s team to see whether the tumors contained fungi as well.

Fungi are one of the great success stories in the history of evolution, with an estimated 6.2 million species. They include the mushrooms that grow in forests, the yeasts that ferment bread and beer, and the mold that brought us penicillin.

Among the hallmarks that all fungi share is the way they eat. They squirt out enzymes to break down nearby organic material and then soak it in. Fungi can also produce vast number of spores, which can survive in all sorts of extreme conditions for years.

We are constantly being exposed to fungi, whether by picking up spores on our skin or eating food on which fungi are hitchhiking. Most of them won’t take up residence in our bodies.

“A lot is just passing through,” said Iliyan Iliev, an immunologist at Weill Cornell Medicine in New York.

But some species have adapted to live inside us. Skin fungi break down oils we make. Others feed on the sugars in our mouths and digestive tracts. Scientists have also found other fungi in our bodies whose lives remain a mystery. “We really don’t know that much,” Dr. Iliev said. 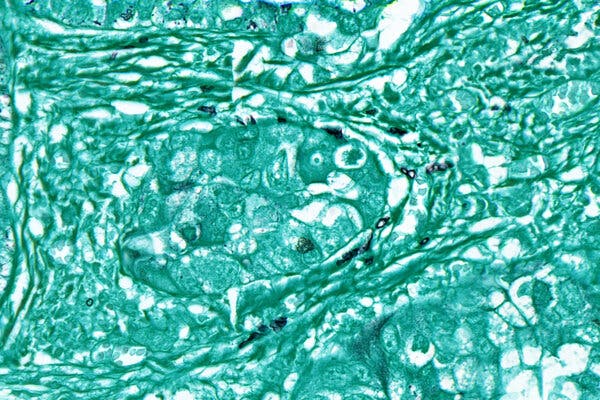 A section of a human lung tumor, in turquoise, with fungi stained in black. Credit...Lian Narunsky Haziza and Nancy Gavert

The San Diego and Weizmann researchers looked for fungi in tumors in much the same way they looked for bacteria, diving back into the galaxy of DNA fragments in the Cancer Genome Atlas. Only this time, they looked for fungal genes. And they also inspected Dr. Straussman’s collection of tumors.

All the types of tumors the scientists examined — from 35 different types of cancer — contained fungi, and each type had a distinctive combination of fungal species, as they reported in one of studies released on Thursday.

In the other new report, Dr. Iliev and his colleagues independently found fungi in tumors from seven parts of the body: mouth, esophagus, stomach, colon, rectum, breasts and lungs.

Deepak Saxena, a microbial ecologist at New York University who was not involved in either study, was surprised at the sheer scale of the findings. “I was not expecting this amount of fungus in cancer,” he said. “This will change the way we think about it.”

Dr. Sepich-Poore and some of his colleagues in San Diego have founded a company called Micronoma to turn their research into a blood test for cancer. By looking at the DNA shed by fungi and bacteria in a tumor, they say they can accurately predict what kind of cancer the microbes came from.

They don’t know why the test works. Geography may be part of the answer: A lung tumor will tend to attract microbes already in the lung. But some microbes manage to move to new organs to get inside tumors. It’s possible that the particular chemistry inside a tumor, such as its level of oxygen, helps determine which microbes will thrive there.

Both new studies found microbes that appeared to be associated with worse outcomes from cancer. For example, Dr. Iliev and his colleagues found that people were more likely to die of stomach cancer if their tumors contained a species of fungus called Candida tropicalis.

It’s possible that some microbes don’t just take up residence in tumors but help them grow. They may cloak the tumor from the immune system, neutralize drugs or help tumors spread through the body.

Jessica Galloway-Peña, a microbiologist at Texas A&M University who was not involved in the new studies, cautioned that this research alone could not establish if a microbe had any such effect. Scientists will need to conduct experiments on cancer cells in a dish or in animals.

“OK, it’s associated with a specific tumor type, but does that just mean that it’s living hunky-dory with the tumor, or is it actually causing the tumor to get bigger and progress?” Dr. Galloway-Peña asked. “You just don’t know at this point.”