The current crisis has unleashed unleashed a firestorm of protest that could further divide the city’s communities. But it is also a chance to forge real unity in opposition to the city’s long-standing power brokers. 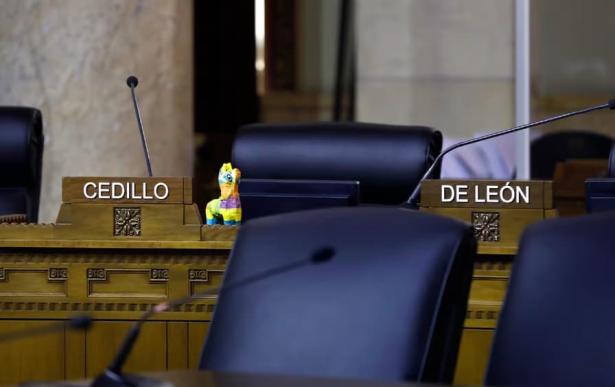 LOS ANGELES—The site of huge urban uprisings in 1965 and 1992 is once again a city on fire. The current blaze was ignited by revelations about an October 2021 meeting between three Chican@ members of the Los Angeles City Council and the Chican@ head of the Los Angeles County Federation of Labor regarding the redistricting of LA’s council districts. In a now-infamous conversation, asreported by the Los Angeles Times, racist remarks were directed against Blacks, Indigenous Oaxacans who live in the city’s Koreatown, Jews, and Armenians. One of the most outrageous utterances was council president Nury Martinez’s reference to the Black child of white LA councilor Mike Bonin as a “changuito” (monkey) who needed a “beat down.” The political thrust of the discussion was creating new Latin@ council districts—largely at the expense of existing districts that have Black representation.

The three city council members, Martinez, Kevin de Léon, and Gil Cedillo have issued public apologies—and Martinez resigned from the city council on Wednesday. Ron Herrera, the fourth participant in the racist exchange, has resigned as head of the LA Federation of Labor.

The Infamous Four have all been denounced and told to resign in continuous public multiracial public demonstrations, by labor unions, Black churches and community organizations, other city council members, LA Mayor Eric Garcetti—and even President Joe Biden. It seems only a matter of time before they are all compelled to abandon their seats in complete disgrace, which could create political openings for progressive candidates, as well as for candidates who are not so progressive.

Both Martinez and de Léon were considered rising stars in the Democratic Party, with an upward trajectory that possibly included future runs for mayor (Martinez), and the US Senate (de Léon). Cedillo had previously lost his own bid for reelection to a young Latin@ progressive who strongly opposed his cozy relationship with the developers who have almost completely gentrified his northeast Los Angeles district. Cedillo also recently endorsed mayoral candidate Rick Caruso, a white billionaire developer running against the African American candidate Karen Bass, who is currently serving in Congress.

Los Angeles is a huge metropolis of nearly 4 million people, with a county population of 10.5 million. More than 70 percent of the city’s residents are people of color, with Latin@s making up 48 percent, Asian Pacific Islanders 12 percent, African Americans 8.8 percent, and Indigenous people 0.7 percent. Whites are currently 29.4 percent of the population. The city is one of the wealthiest urban enclaves in the world, followed by Seoul, London, and Paris. It is of course also home to a massive tourist and entertainment complex. And yet, despite that incredible wealth, LA suffers from the greatest wealth disparity in the country: White households in Los Angeles have a median net worth of $355,000, compared to a median wealth of $3,500 for the city’s Chican@ residents, and $4,000 for the Black population.

These demographic and wealth numbers reflect a remarkable history of Indigenous dispossession and repression, the US theft of the California territory from Mexico, and a notorious history of racism against both the city’s Black and its Asian populations. In a horrid story never told in US history texts, 19 Chinese immigrants were lynched by a racist mob in a Los Angeles in 1871. Land theft, racist credit and banking policies, residential redlining, educational segregation, voter restriction and gerrymandering are all major contributing factors to the outrageous racial wealth gap in Los Angeles. That wealth inequality is also the foundation for the myriad other forms of inequality: environmental racism, poor and under-resourced schools, police brutality, substandard and often unaffordable housing, lack of access to quality health care, as well as language and cultural oppression.

And for decades this system has been protected and held in place by a Euro-American power structure that persists to this day. The County of Los Angeles is governed by a five-member board of supervisors, who preside over a population larger than 40 US states; the county’s annual budget of $38.5 billion is greater than that of a majority of US states. The County Board of Supervisors has a 3-2 white majority, in a county that is 73 percent people of color. The Los Angeles Board of Education, which governs the second-largest school district in the country, has seven members, of whom four are white, two are Latin@, and one is African American. They govern a district of nearly 665, 000 students—of whom nearly 90 percent are students of color, a great majority of whom are poor. The Los Angeles City Council has 15 members, of whom six are white, four are Latin@, three are African American, one is Korean American, and one is of South Asian background. Mayor Garcetti is white.

It is no longer fashionable to speak of a white power structure, but clearly that is what exists in Los Angeles—a structure that, along with other non-governance institutions (banks and investment firms, large corporations, philanthropic foundations, mainstream media outlets) serves to enforce and perpetuate a situation where millions of people of color suffer inequality in every realm of daily life. And it was this power structure that seemed somehow completely absent from the racist slurs of Martinez and friends as revealed by the Times.

The racial volcano that is Los Angeles has now unleashed a firestorm of protest that could either unite or further divide the city’s communities. Amid all the completely justified outrage and uprising over that conversation, and the righteous demands that the three elected immediately resign from their offices, some political lava has spilled that is having a negative burn impact on Black and brown communities. This lava takes the form of a type of ethno-nationalism that portrays Latin@s as an almost inherently racist population—a community that seeks to achieve its own racial equality primarily at the expense of the oppressed Black population. This dovetails with a growing “oppression Olympics” thinking reflected in the term BIPOC (which creates a an oppression hierarchy with Blacks and Indigenous people at the top, and Latin@s and Asians relegated to an amorphous “other” category.) The danger of ethno-nationalism is not unique to Latin@s. We have seen this within other communities of color—including among African Americans. It is a very reactionary response to white supremacy, in which our communities and social movements attempt to cut a deal with the larger system of national white supremacist oppression, much as was seen in South Africa during the apartheid era.

This is an unfortunate tendency, which contrasts sharply with the unity efforts of past decades captured in the designation of an oppressed community of color as a Rainbow Coalition, or as a Third World community sharing commonalities of oppression and inequality and a common desire for freedom and equality. This tendency, if left unchallenged, could exacerbate the divisions among African Americans and Latin@s exactly at a time when a powerful and energized right-wing movement seeks to institute a form of theocratic apartheid and white minority rule throughout the US.

The soundest and most revolutionary response to the current situation in Los Angeles is a multiracial alliance that will champion and lead a movement for the massive expansion of democracy. Specifically, this could be a movement that would demand a massive expansion of the Los Angeles County Board of Supervisors, the Los Angeles City Council, and the Los Angeles Board of Education. Instead of perpetuating the current zero-sum game, such an expansion would create opportunities for all of Los Angeles’s oppressed communities to achieve representation on those bodies, laying the groundwork for advancing a truly equitable program aimed at dismantling, once and for all, the wealth inequity and political inequality that continue to have such a pervasive and devastating impact on the city’s communities of color.

Bill Gallegos is the former executive director of Communities for a Better Environment, a longtime Chicano activist, and a member of the editorial board of The Nation.

Bill Fletcher Jr. is the former president of TransAfrica Forum, a longtime trade unionist, and a member of the editorial board of The Nation.