An Uptick in Elder Poverty: A Blip, or a Sign of Things To Come?

In the 1960s, more than a third of seniors lived in poverty. Federal programs like Medicare to help the elderly, the situation improved significantly. But last year, the poverty rate for those 65 or older increased, even as it sank for everyone else. 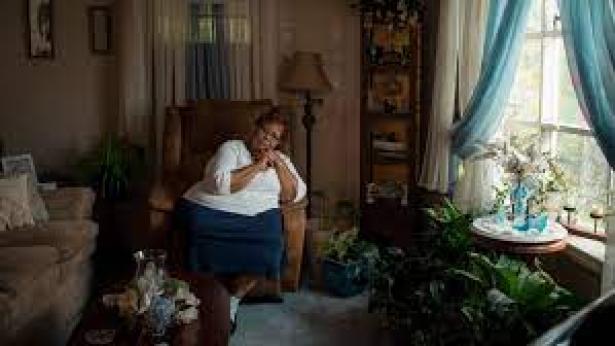 Juanita Brown, 77, has had to do without things like replacing her dentures or replenishing her heating oil.,Photograph by Mike Belleme / New York Times

The uptick offers new evidence that elderly people haven’t fared as well as younger generations in recent years, and some experts worry that it may signal a broader setback in the financial security of those past their prime working years.

While 9.5 percent of the elderly population lived in poverty in 2020, that figure rose to 10.7 percent last year, the Census Bureau reported. The coronavirus pandemic was a central driver, disproportionately disrupting the employment and income of older people.

They usually weren’t eligible for as much pandemic relief as families with children. And older workers left the labor force at higher rates than others as Covid-19 spread, and can have difficulty returning.

That’s the situation that Walter Cox, 64, may find himself in. As an automotive technician at a car dealership in Tulsa, Okla., he never made more than $9.50 an hour, and wasn’t able to save money while raising two children. Nevertheless, he retired in 2020, as the physical labor — and rude customers — took a toll. He also got married, and he and his wife had about $2,000 in combined monthly income for most of 2021, which made for a comfortable if modest living.

But when his wife had to leave for New Mexico to take care of her mother, the couple divorced, leaving Mr. Cox with a $765 Social Security check to cover all of his bills. That will leave him below the official poverty threshold of $12,996 for a person 65 or older living alone. He has been mowing yards for some extra income, but can’t do anything he had imagined doing in retirement, like a road trip to Yellowstone National Park.

“I literally cannot afford to do anything but put gas in my car, buy groceries and pay my utility bills,” Mr. Cox said. “Because of the divorce, it’s looking pretty grim. But I’m hopeful that things improve.”

For many older Americans, an inflation adjustment to Social Security payments — an 8.7 percent increase for 2023 was announced last week — will help next year. But people hitting retirement today often depend on Social Security as their only source of income, which wasn’t the program’s original intention. 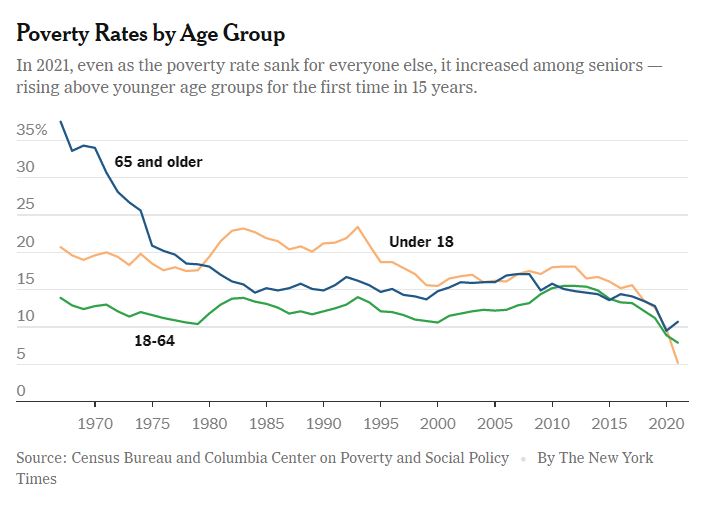 Older workers’ wages have grown more slowly compared with other groups over the past few years, and many didn’t have 401(k) accounts, or didn’t contribute enough to them, as companies closed their defined-benefit pension plans over the last couple of decades.

“We’re getting more and more older people who lived through this experiment with do-it-yourself pensions, and they’re coming into this age group without the same kind of incomes that older people have,” said Teresa Ghilarducci, an economics professor at the New School who specializes in retirement policy. “I don’t think it’s a blip.”

Even though the share of elderly people officially below the poverty line is low by historical standards in the United States, it remains among the highest in the developed world, according to the Organization for Economic Cooperation and Development. The average poverty rate for older Americans also masks far higher shares among more vulnerable groups, with nearly one in five Black and Hispanic women 65 or older falling below the official poverty threshold in 2021. It’s higher for single people, too — a reality forced on hundreds of thousands of older Americans whose spouses died of Covid-19.

The poverty rate is also not a bright line when it comes to financial hardship. It doesn’t take into account debt, which more seniors have accumulated since the Great Recession. Moreover, nearly one in four people 65 or older make less than 150 percent of the federal poverty line, or $19,494 on average for those living alone. Another measure, developed by the Gerontology Institute at the University of Massachusetts Boston and called the Elder Index, finds that it takes $22,476 for a single older person in good health with no mortgage to cover basic needs, with the cost escalating for renters and those with health problems.

“To some extent we’re splitting hairs when we talk about people who fall just above and just below, because they’re all struggling,” said Jan Mutchler, a demographer at the University of Massachusetts Boston who helped devise the Elder Index. “The assumptions that go into what we’re calling hardship are just flawed.”

That’s true for Juanita Brown, 77, who lives on her own in Galax, a small town in Virginia’s Blue Ridge Mountains. A farmer’s daughter, she worked as a nanny, and then a certified nursing assistant, and then a preschool teacher. Her husband worked in the local textile industry, and after raising three children, they had built a substantial nest egg.

But then Ms. Brown’s mother developed Alzheimer’s disease and couldn’t support herself. Ms. Brown stopped working to take care of her, which cost another $500 per month in expenses. Her husband got prostate cancer, which required extended trips to the hospital in Winston-Salem, N.C.

“That depleted us,” Ms. Brown said. After her husband died in 2019, she was left with a car payment and more bills that went unpaid during his illness. She took out another mortgage on her home to help cover them, along with the $1,465 she gets from Social Security on the fourth Wednesday of every month.

That technically puts her above the poverty line. But that hasn’t left enough money to replace the dentures she lost three years ago, or to replenish her heating oil, which now costs up to $250 a tank. She uses her wood stove as much as she can, but it gets too cold at night, which aggravates her arthritis. She records every expense in a little booklet.

“When you sit down and look at your income, and what you got to pay for every month, you got to cut corners,” Ms. Brown said. Sometimes, one of her sons will visit and leave her with $50, even though she knows they can’t afford it, either.

Many times before, Ms. Brown has leaned on the support of District Three Governmental Cooperative, a local agency that provides transportation, help navigating government benefits, opportunities to socialize and other services for older residents. Debbie Spencer, the agency’s director of aging and disability services, has seen more clients struggle over the last year to pay for groceries. Covid-19 also made it more difficult to reach her more isolated clients, who often lack internet connections.

“We’re seeing people who don’t know whether to pay their utility bills, to buy food, or to buy medicine,” Ms. Spencer said. “They’re having to make decisions about what they’re going to do. We helped people last year, but we see more and more people calling us this year for help.”

The agency also runs a training program for older workers, popular with people who’ve found their Social Security income inadequate to live on.

To prevent the poverty rate from rising further, advocates for the elderly recommend three types of actions: shoring up employer-sponsored retirement programs, helping older people earn more by working longer if they need to and basing eligibility for public benefits on a more realistic definition of economic hardship.

In 2022, the Labor Department reported that while 72 percent of civilian workers had access to an employer-sponsored retirement plan, only about 56 percent took part in one. That, in part, is why the lowest one-fifth of the income distribution in households headed by seniors gets 80 percent of its income from Social Security.

For those retiring today who do have a 401(k), a swooning stock market is forcing them to recalibrate what income they can expect going forward. And the millennial generation is likely to retire less prepared than its predecessors, because of higher loads of student debt.

Those without adequate retirement savings often have to keep working late into their 60s and 70s. Emily Allen, interim president of the AARP Foundation, says too many seniors overestimate their ability to take a break — or are pushed out of jobs — and end up in a difficult situation.

To supplement low wages, the American Rescue Plan of 2021 temporarily made people over 65 eligible for the earned-income tax credit, for which they otherwise don’t qualify. Advocates for the elderly have pushed to make that change permanent, since the wage supplement is often enough to lift people out of poverty.

Older people low on financial resources can also look forward to the drug pricing provisions of the Inflation Reduction Act, which will reduce the cost of medications in the coming years and provide subsidies for those living close to the poverty line.

Meanwhile, though, most aid programs that had been created or strengthened in 2020 and 2021 are gone. Gail Gorlen, 77, started leaning more on her credit card after the Supplemental Nutrition Assistance Program went from sending her $170 each month — an amount increased during the pandemic — to $115. She feels lucky to have found an apartment in a subsidized senior housing complex in Joplin, Mo., when she and her longtime partner split up last year, and is hoping that her Medicare Advantage program will provide some extra help with food.

But for now, even cooking all her food at home, the days before her benefit card arrives on the 20th of the month are stressful.

[Lydia DePillis is a reporter on the Business desk who covers the changing American economy and what it means for peoples’ lives. @lydiadepillis ]