‘B4’ It’s Too Late: The Socialist Left’s Role in Fighting Autocracy

B4—the Broad Front Opposing the Right—can’t be about the status quo. While it must be aimed at defeating all attacks on our democratic rights, its thrust must be to expand democracy and shift US domestic and foreign policy. 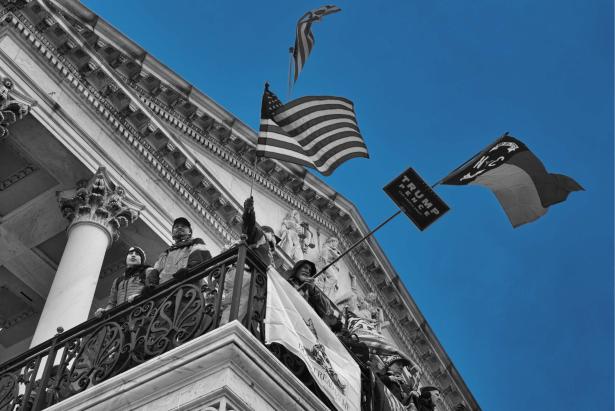 I found myself watching the Netflix series Babylon Berlin over the last several weeks.  Netflix has three seasons of this German-made look at 1929 Weimar Germany.  Though technically a mystery revolving around a German police detective, this is a story of the collapse of the Weimar Republic and the growing strength of the Communists as well as various right-wing currents within the republic, including but not limited to Nazism.  As such, it is chilling and cannot but force a US viewer to reflect upon the growth of right-wing populism and right-wing authoritarianism in the US.

It was within this broader political and media context of the growth of right-wing authoritarianism that I read Pro-Democracy Organizing against Autocracy in the United States (PDOA for short).  This is an amazing, comprehensive, and sobering look at what needs to be considered and undertaken in the face of virulent right-wing authoritarian mass movement.

By way of preface, it is important to be clear that the right-wing populist/authoritarian movement that has become energized since 2009 did not appear out of nowhere.  The history of the US as a racial settler-colonial project laid very firm foundations for the periodic rise of nefarious movements of the political Right, movements that are regularly racist, sexist, xenophobic and irrationalist.  The current incarnation of right-wing populism aims to create a future for the US based on a reconfigured US, something akin to the pre-1912 country, if not being a 21st century version of the Confederate States of America. A neoliberal right-wing combined with a far-right semi-fascist tendency has resulted in the development of what can be understood as a “neo-Confederate” political bloc.  This is a complicated and contradictory alliance that shares the objective of establishing a semi-apartheid system in the US along with the suppression of basic democratic rights up to and including the possibility of gutting and redoing the Constitution.

The paper also suggests specific steps in this direction that include information networks, education and training efforts, international outreach and, interestingly, development of conflict resolution mechanisms for handling contradictions within the broad front.

Rather than reiterate the excellent points raised in the paper, points with which I am largely in agreement, I believe it necessary to focus on the particular role and vision that a socialist Left can advance in our current situation and in building resistance to right-wing authoritarianism.

Clarity on the nature of the enemy

There should be nothing surprising in this assertion.  Whether in war or politics, one must first ascertain who or what is the main enemy and then figure out the steps—and alliances—necessary in order to bring them down.  A failure to attain that clarity can mean a dispersal of resources and, ultimately, failure.

Starting here is critical since there are many forces on the US Left that refuse to identify the neo-Confederate bloc as the principal enemy.  They remain obsessed with taking down centrist Democrats or believing that these two opponents are equally dangerous, as if the centrist Democrats are trying to destroy abortion, voting rights and the recognition that the Earth is round.  If one cannot identify the principal opponent, the approach elaborated in PDOA is futile.

The need for “B4”—before it is too late

As PDOA suggests as its first point, there is a need for what I would term a “Broad Front Opposing the Right,” i.e., “B4.”  The authors suggest that efforts towards such a front need to be started immediately through a series of summits.  Let’s step back for a moment, however.

Using the term “broad front” aims to convey both the scale and scope of this project, but also to avoid unnecessary discussions that disarm the Left over whether one is building a “united front” or a “popular front.”  In the context of 21st century US, what is being proposed is a “broad” front that has a focus on overcoming and smashing the far-Right, i.e., demolishing the neo-Confederate bloc.  PDOA is correct in saying that this must be multi-racial/multi-national and cross-class.  It cannot be an alignment of the Left alone nor can it be limited to those who are in total agreement with a left/progressive agenda.

B4 must first of all be defensive in that it is actively opposing the thrust from the far-Right.  It is aiming to put the breaks on the neo-Confederate offensive.  Thus, the question that must be asked by those trying to bring such a front into existence—which is hopefully the socialist Left and our immediate allies—revolves around identifying who that should include.  To answer that, there must be a broad mapping of liberal, progressive and left forces across the US.

There is a prior step, however.  The socialist Left and left/progressive forces need to have a convening to ensure that there exists a critical mass of organizations and individuals committed to this path.  Building B4 will involve considerable political, organizational and diplomatic work.  This core will need to take responsibility for moving the B4 process, though a broader left/progressive configuration will be necessary in order to actually convene a full-blown B4 process.

A socialist Left core that has an analysis of the larger national picture, will need to undertake the diplomatic work involved in initiating the sorts of convenings that PDOA suggests.

There are too many left and progressive convenings that have involved noted individuals and interested people who have no base.  Even a large gathering of people is next to irrelevant if they lack a base.  Thus, there is a need for groups such as the Working Families Party, Progressive Democrats of America, as well as a host of state-based and locally based left/progressive groups that have a real mass base to play the leading role in a convening.  The socialist Left, through its work in such groups, must fight for a united front orientation and against sectarianism and small-group mentality.

Principles that unite and the need to reject purity

The Right is far better at united fronts/broad fronts than the Left.  They make it easy for people to join their mass movements and set very few preconditions.  Their assumption, proven over and again, is that they will win people to their overall framework through the course of their work in one of their fronts.

The Left, on the other hand, insists on raising the bar for entry into our various projects.  We tend to set purity tests of various sorts and identify why we cannot unite, rather than determining what steps are necessary in order to unite.

It is one thing to convene a gathering (no matter how difficult); it is another to establish clarity on strategic direction.  B4 needs to have a set of strategic objectives in terms of what it seeks to accomplish at the national, state and local levels over the next 10 years.  Those objectives, we should note, should not be restricted to electoral cycles.  They should aim at winning broad left/progressive power at the national, state and local levels through defeating the Right and presenting a program that breaks with the status quo.

This last point cannot be overemphasized.  B4 cannot be about the status quo.  While it must be aimed at defeating all attacks on our democratic rights, its thrust must be to expand democracy; a program of consistent democracy.  As such B4 must aim to shift US domestic and foreign policies, combatting the Right domestically and globally.

Encourage splits within the Right

One of the most insightful and courageous points raised in PDOA is the need to encourage defections from the neo-Confederate bloc.  For many leftists, such an idea is an anathema to our general approach.  Yet, in order to defeat our opponents, we must ascertain means of provoking splits within their ranks and demoralizing component parts of their blocs.

To use a strange analogy, I was once engaged in protecting a meeting from the intrusion of provocateurs.  The provocateurs showed up and said—openly—that if they had to bust into the meeting, they needed to attack my colleague first and not me.  That was a brilliant move aimed at destabilizing the alliance with my colleague and trying to get me to fight less.

B4 must employ a similar approach.  That means that there will be Republicans, independents, etc., with whom we have no strategic unity, but with whom we may have tactical unity in opposing the far-Right.  Under those circumstances, we must find means for united action or, at a minimum, aim to neutralize them.

And B4 does what?

Left and progressive forces regularly form coalitions and then nothing happens!  Usually this is connected with lack of strategy and, specifically, the inability to prioritize.  B4 will need to coordinate activities among its constituents; provide on-going information as well as counter the propaganda of the Right; and engage in various campaigns (electoral and non-electoral).  This work includes:

Conflict-resolution within B4 and resolving “contradictions among the people”

So many progressive coalition efforts are undermined by rumor-mongering, miscommunications, and the heightening of contradictions until differences result in splits.  We have little successful experience in internal mediation with an aim of resolving differences.

While some differences are actually splitting differences, a new approach can be introduced in order to sustain and build B4. Among the understandings and practices in this approach:

Is the socialist Left up to the challenge?

Therein lies the question.  The socialist Left vacillates between grandiosity and myopia.  We often cannot conceive of winning because winning necessitates broad alliances with forces with whom we are frequently at odds.  Additionally, we quickly elevate every difference to one of principle rather than deciding what issues/matters can and must be resolved at any given moment and what can be placed on hold.

If we can agree that B4 is essential, and if we can agree on the overall approach offered by PDOA, then we can proceed with all deliberate speed, in organizing to weather the coming storm and build a countercurrent advancing consistent democracy.

Bill Fletcher Jr. is a longtime trade unionist, writer and speaker. He was also a president of TransAfrica Forum, chairperson of the board of directors of Advocates for Minor Leaguers, and co-coordinator of the Campaign to End the Moroccan Occupation of Western Sahara. He is a member of the International Work Team of Liberation Road. He has written and edited several books, including Solidarity Divided: The Crisis in Organized Labor and A New Path Toward Social Justice (with Fernando Gapasin, University of California Press, 2009) and the murder mystery novel The Man Who Fell From the Sky (Hardball Press, 2018) and its forthcoming sequel.

Convergence is a magazine for radical insights. We work with organizers and activists on the frontlines of today’s most pressing struggles to produce articles, videos and podcasts that sharpen our collective practice, lift up stories from the grassroots, and promote strategic debate. Our goal is to create the shared strategy needed to change our society and the world. Our community of readers, viewers, and content producers are united in our purpose: winning multi-racial democracy and a radically democratic economy.

Today, our movements continue to grow, but so too does the threat from the racist, authoritarian right. We believe we can defeat them, dismantle racial capitalism, and win the change we need by building a new governing majority that is driven by a convergence of grassroots social movements, labor movements, socialists, and progressives.