The True Cost of National Security

The Pentagon and the White House focus on the core Defense budget, but that’s not the half of it. Much attention will focus on Social Security and Medicare, which have been flashpoints lately. Buy if coverage in years past is any guide, we can expect stories from many news outlets that will significantly understate a third huge slice of spending the real costs of military and other national defense spending. 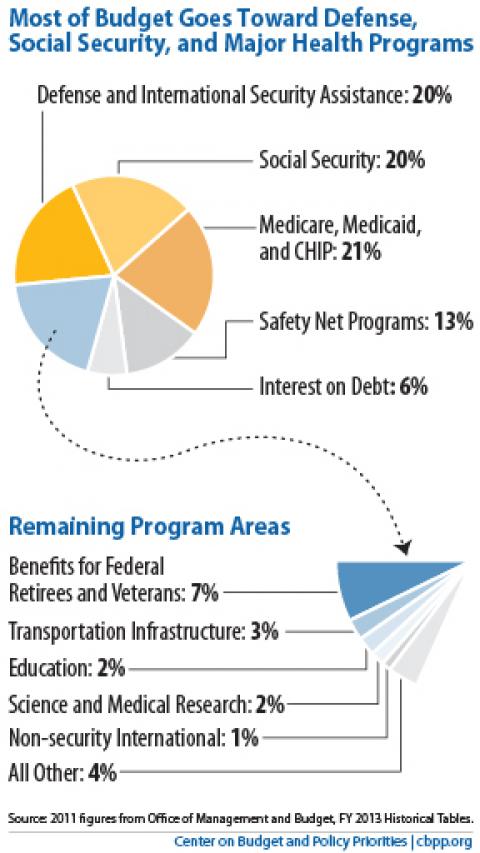 Soon, we will get the president's proposed fiscal 2014 spending plan. Much attention will focus on Social Security and Medicare, which have been flashpoints lately. Meanwhile, if coverage in years past is any guide, we can expect stories from many news outlets that will significantly understate a third huge slice of spending--the real costs of military and other national defense spending.

Chuck Hagel, on the griddle now as President Obama's nominee for Secretary of Defense, famously called the Defense Department "bloated," in a 2011 interview with Financial Times. But budget stories then and now tend to report on the base budget from the Department of Defense, leaving readers with the impression that that is the full cost of fulfilling the Constitutional mandate to "provide for the common defence."

It isn't. From the perspective of taxpayers who must bear the burden, total national security costs are as much as 2.5 times the base Defense budget. Reporters might want to take a look at the true costs, and not just at the way the White House prepares the budget and Pentagon spins it.

A year ago, in budget reporting on defense costs, the figure of $525 billion got wide play, as did the fact that the number was down slightly from the previous year. The New York Times reported that "the military budget is to be $525 billion," a decline of $6 billion mostly because of increased health insurance fees paid by military personnel, while the Los Angeles Times reported that "the $525 billion sought in fiscal year 2013 is $6 billion less than Congress approved for 2012." The $525 billion figure was also cited by The Wall Street Journal, Bloomberg, and The Associated Press (via Fox).

The Washington Post's Federal Eye blog did a little better. It used a qualifier word, "core" budget, while Reuters used the a different qualifier--"base"

But even qualifiers like "core" or "base" don't quite do the trick. They don't help readers understand the much larger costs of national security. Journalists covering the fiscal 2014 budget that the White House will issue in a matter of days should look carefully at the document as well as at other sources that have analyzed the total costs.

So how misleading is the $525 billion figure?

For starters, the $525.4 billion does not include $88.5 billion for unbudgeted costs of wars overseas, called Overseas Contingency Operations. Add other Pentagon spending details and the projected outlays (see fiscal 2013 budget at p. 84) come to $672.9 billion, which is 28 percent more than the basic Defense budget.

Each year the Director of National Intelligence releases a total budget figure for national intelligence. For fiscal 2013 it was $52.6 billion, down from $53.9 billion in fiscal 2012. National security includes the NSA, CIA, and other intelligence services. Military intelligence spending, included in the base Defense budget, was $19.2 billion. (A good place to track these budget issues is the Federation of American Scientists Intelligence Resource Program.)

Then there is the considerable cost of wars past. The budget shows almost $139 billion for Veterans Affairs, though the numbers are presented in the budget text in a way that anyone not reading carefully would think is less than half that much.

Add all these up and the total cost grows 86 percent, to $977.5 billion. Most military intelligence spending is buried in these figures.

Meanwhile, wars are debt-financed, even though taxes were raised to help pay for every war American prior to Afghanistan and Iraq. Add in interest costs attributable to past conflicts, as the pacifist War Resisters League does, and the fiscal 2013 cost of national security comes to more than $1.3 trillion--two and a half times the basic Defense budget.

That pretty much all-in cost almost equals the $1.6 trillion expected to be raised through the individual federal income tax in fiscal 2013, as shown in Table S-5 of the proposed White House budget.

By this broadest measure, the cost of national security consumes every individual income tax dollar except the last one paid by each thousand paid per American. That doesn't leave much for other spending on commonwealth goods and services that provide the foundation for private incomes and wealth.

Social Security and Medicare, financed with payroll taxes, cost $820 billion and $528 billion respectively, for a total of $1.3 trillion, making their combined cost less than the broadest measure of national security spending.

Many of the budget articles cited above also focused on one aspect of the White House and Pentagon spin--that defense spending would be reduced over a decade--by $486.9 billion compared to the fiscal 2012 budget projections. Through fiscal 2022, defense spending would be more than $7.2 trillion, instead of the $7.7 trillion projected a year earlier, through 2021, the proposed budget shows (see Pages 77-78 and Tables S-1 and S4).

How much are those savings? Such big numbers--billions and trillions--defy normal human understanding and need context, especially when such a big number actually is quite small when understood in context.

Pencils ready? One way to give these savings numbers meaning is to note that the projected lower spending reduces the broader Defense budget ($672.9 billion this fiscal year) by 6.3 percent over ten years, compared to the projection made a year earlier through fiscal 2021. That is a reduction of $1 in $16.

This reduction also works out to $155 per American annually over the ten years. (Just divide $486.9 billion by 314 million Americans, and then by ten because it is spread over ten years.) That $155 per year is less than $3 per week per American, and that is before taking population growth into account. Less impressive.

When disasters and calamities strike, the criticism is that journalists compete to portray them in their fullness. In budget matters journalists, by the same token, maybe journalists should at least strive for a full accounting of costs.

The Washington Post has done so. Excellent graphics that convey the relative size of the Pentagon budget are at the Post's Wonkblog. http://www.washingtonpost.com/blogs/wonkblog/wp/2013/01/07/everything-c…