Many in the labor movement recognize some of the problems that working people face, however there isn't enough urgency and there isn't a recognition that fundamental change is necessary. The opposition sees this as a tremendous moment to eliminate unions as a viable force for working people. 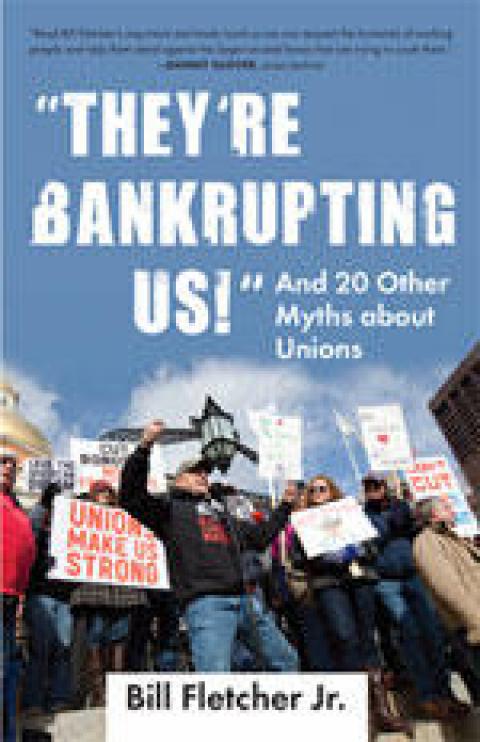 "They're Bankrupting Us!" And 20 Other Myths About Unions, AFL-CIO
In the latest AFL-CIO Book Club event, longtime racial justice, labor and international activist, scholar and author Bill Fletcher Jr. discussed his new book, "They're Bankrupting Us!" And 20 Other Myths About Unions." The book tracks the history of negative myths about the labor movement along with the movement's contributions and missteps.
In his talk, Fletcher argued that while many in the labor movement recognize some of the problems that working people face, he's concerned there isn't enough urgency and that there isn't a recognition that fundamental change is necessary. The opposition, he said, sees this as a tremendous moment to eliminate unions as a viable force for working people.
The problems the labor movement faces now are not simply about the lack of organizing, although organizing is important. "We're reflating a tire with a slow leak," Fletcher said. "If we keep driving it, we'll have a catastrophic blowout."
He also cautioned that while Fox News and other right-wing propaganda outlets are part of the problem, the labor movement doesn't help itself by not getting out enough door to door and face to face and letting people know what it is that labor stands for and how unions help them gain a voice on the job.  "We have to re-establish our mission."
Most Americans would be more interested in the movement if they knew more about the history of labor-management relations in the United States, particularly about how violent management has often been in denying workers' rights, he said. "We don't talk about the fact that our union history is one of the most violent in the world." He noted incidents when military artillery was used against striking workers or striking workers and their families were placed in detention camps.
But there are positive signs, he said. The Madison, Wis., uprising, the Occupy movement, worker centers and organizing around immigrant workers, for example, signal that many of people are looking for answers about how the country can pursue economic justice.  A renewed emphasis on educating and engaging with union members and participants in the broader workforce is vital. It's important for labor to engage people and give them hope, while maintaining a sense of realism about the difficulties unions face, Fletcher said.
Other steps Fletcher suggested the labor movement should take to make positive change include:
Fletcher also stressed the importance of going on offense and not just reacting to attacks on workers' rights. "If you are preoccupied with avoiding bullets, you can't take out the other side," he said.
Fletcher's talk came as the union movement is engaged in a nationwide series of in-person and online "listening session" to gather ideas to take to the AFL-CIO's 2013 Convention in September about how to build a strong and effective movement for the future of America's workers. To join the discussion, check out the AFL-CIO 2013 Convention discussion pages.