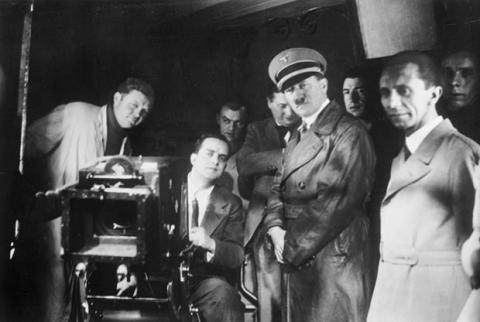 Hitler and Goebbels at the UFA studios in Berlin in 1935. ,Tablet / Deutsches Bundesarchiv

Adolf Hitler loved American movies. And as it turns out, Hitler’s love for American movies was reciprocated by Hollywood. A forthcoming book by the young historian Ben Urwand, to be published by Harvard University Press in October, presents explosive new evidence about the shocking extent of the partnership between the Nazis and major Hollywood producers.

Digging through archives in Berlin and Washington, D.C., he has unearthed proof that Hollywood worked together with the Nazis much more closely than we ever imagined.

Urwand has titled his riveting book The Collaboration: Hollywood’s Pact With Hitler, and using new archival discoveries, Urwand alleges that some of the Hollywood studio heads, nearly all of whom were Jewish, cast their lot with Hitler almost from the moment he took power, and that they did so eagerly—not reluctantly. What they wanted was access to German audiences. What Hitler wanted was the ability to shape the content of Hollywood movies—and he got it.

Journalism Is the Worst 4-Year College Investment-Be a Sailor Instead!

If the constant downsizing in the news-media industry hasn't already convinced you to pick something else to do with your life, a new study shows the worst "return on investment" for a four-year degree is a job in journalism. With a median salary of only $37,090 and college costs of $52,596, it would take today's newly-degreed journalist 31.84 years to pay off a student loan at 5% interest. Add the insecurity and shame associated with the reporting life, and you've got a recipe for a life of intolerable misery and want.

The founder of Personhood Ohio says that God “willed the apostles to sacrifice their lives” so he has decided to auction of his personal assault rifles and over 2,500 rounds of ammunition to raise funds for banning abortion.
“What do you do when you have a Personhood mailing to 20,000 pro-life Ohioans that costs $5,500 and only have $2,900 in your Personhood account?” Personhood Ohio Director Patrick Johnston wrote in a fundraising email on Sunday. “I’m selling some of my favorite things – some powerful rifles and ammo.”  Johnston is selling two assault rifles with large magazines, plus a .280 Remington and a .243 Winchester, both with scopes. Personhood Ohio attempted last year to get a get a constitutional amendment banning abortion on the state’s ballot, but the group collected only 30,000 of the 385,000 necessary signatures.

Listen to the story

After two hours of yelling, shooting and getting tough with a group of American businessmen one hot spring afternoon, Steve Gar turned to storytelling.

Gar is an instructor at Caliber3, a private counterterrorism training center in an Israeli settlement area south of Jerusalem that offers short shooting courses for tourists. In addition to his counterterrorism service and teaching at Caliber3, Gar told the group he is studying to become a rabbi and runs a Torah program for Jewish youth with special needs, like Down syndrome and autism.

His storytelling has a purpose: humanize the image of Israeli soldiers.

Gar asks the American visitors to "help fight terrorism" by speaking up against negative views of Israeli soldiers they might see or hear back home. 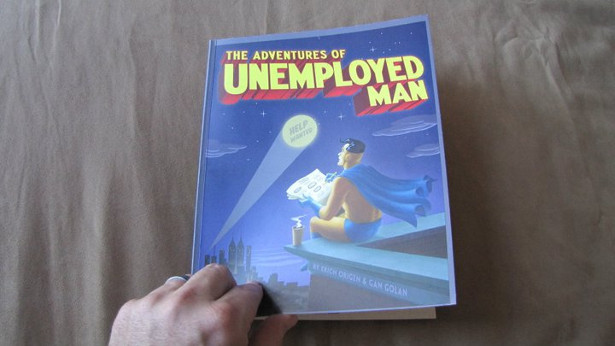 A couple weeks ago, a friend of mine sent along a new web-comic, Strong Female Protagonist, http://strongfemaleprotagonist.com/   which her daughter Molly Ostertag helps to create. The comic follows the adventures of Allison, a young, middle-class American — a.k.a. Mega Girl —who finds that her superpowers are no match for dealing with the real-life issues she wants to address. Au courant and entertaining, it raises lots of provocative questions, with a few laughs along the way.

What can comics do for activists and campaigners? They can tell an awesome story — with as much or as little detail as one wants. They can teach lessons; show what victory looks like; illustrate why you are struggling or the issues you face; garner public support. Since people learn in a variety of ways — picking up on auditory, visual, physical cues differently — the use of compelling, colorful graphics can go a long way to help get your message out.

Kickstarter apologized on Friday for not removing a “seduction guide” project from its site, even though the project in question advocates for sexual violence against women.

Along with taking down the project, titled “Above the Game: A Guide to Getting Awesome With Women,” Kickstater announced it will prohibit all “‘seduction guides, or anything similar, effective immediately.”  The company will also donate $25,000 to the Rape, Abuse and Incest National Network, an anti-sexual violence organization. Since the project surpassed its funding target, Kickstarter said it “missed the window” to take back the $16,369 raised for the pro-rape project.