How the ANC's Faustian Pact Sold Out South Africa's Poorest

South Africa is not a perfect society. Full equality - social and economic - does not exist, control of the country's wealth remains in the hands of a few, so new challenges and frustrations arise. I believe we should be doing far better. Our liberation struggle reached a high point, not its zenith when we overcame apartheid rule. 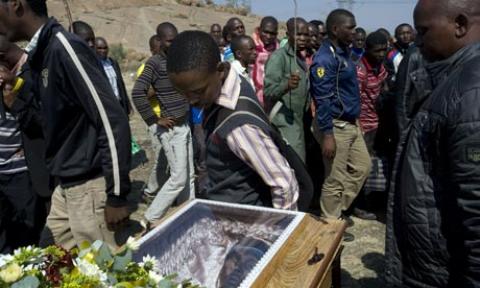 Lonmin mineworkers pay their respects to one of 34 miners killed Aug 16 near Marikana mine. 'The Sharpeville massacre in 1960 prompted me to join the ANC. I found Marikana even more distressing: a democratic South Africa was meant to end such barbarity.',
South Africa's young people today are known as the Born Free generation. They enjoy the dignity of being born into a democratic society with the right to vote and choose who will govern. But modern South Africa is not a perfect society. Full equality - social and economic - does not exist, and control of the country's wealth remains in the hands of a few, so new challenges and frustrations arise. Veterans of the anti-apartheid struggle like myself are frequently asked whether, in the light of such disappointment, the sacrifice was worth it. While my answer is yes, I must confess to grave misgivings: I believe we should be doing far better.
There have been impressive achievements since the attainment of freedom in 1994: in building houses, crèches, schools, roads and infrastructure; the provision of water and electricity to millions; free education and healthcare; increases in pensions and social grants; financial and banking stability; and slow but steady economic growth (until the 2008 crisis at any rate). These gains, however, have been offset by a breakdown in service delivery, resulting in violent protests by poor and marginalised communities; gross inadequacies and inequities in the education and health sectors; a ferocious rise in unemployment; endemic police brutality and torture; unseemly power struggles within the ruling party that have grown far worse since the ousting of Mbeki in 2008; an alarming tendency to secrecy and authoritarianism in government; the meddling with the judiciary; and threats to the media and freedom of expression. Even Nelson Mandela's privacy and dignity are violated for the sake of a cheap photo opportunity by the ANC's top echelon.
Most shameful and shocking of all, the events of Bloody Thursday - 16 August 2012 - when police massacred 34 striking miners at Marikana mine, owned by the London-based Lonmin company. The Sharpeville massacre in 1960 prompted me to join the ANC. I found Marikana even more distressing: a democratic South Africa was meant to bring an end to such barbarity. And yet the president and his ministers, locked into a culture of cover-up. Incredibly, the South African Communist party, my party of over 50 years, did not condemn the police either.
South Africa's liberation struggle reached a high point but not its zenith when we overcame apartheid rule. Back then, our hopes were high for our country given its modern industrial economy, strategic mineral resources (not only gold and diamonds), and a working class and organised trade union movement with a rich tradition of struggle. But that optimism overlooked the tenacity of the international capitalist system. From 1991 to 1996 the battle for the ANC's soul got under way, and was eventually lost to corporate power: we were entrapped by the neoliberal economy - or, as some today cry out, we "sold our people down the river".

In the early 1990s, we in the leadership of the ANC made a serious error. Our people still paying the price.