Dispatches from the Culture Wars - Breaking Out the Hard Stuff edition 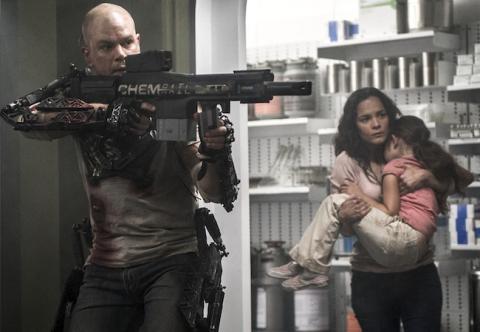 Studio picture for Elysium, Sony Pictures
Fixing Old Markets With New Markets: The Origins and Practice of Neoliberalism
By Philip Mirowski
August 15, 2013
Naked Capitalism
For Neoliberals, The Market is the only ultimate arbiter of Truth. Their problem is that most people still resist this fundamental tenet, because they persist in believing in quaint notions of justice, including the notion that rewards should be proportionate to effort, or else hoping sustenance be apportioned according to basic needs. Because The Market is smarter than anyone, the poor need to capitulate to whatever The Market currently bequeaths them. The rich, of course, have no problem with their lot. This unequal distribution of wealth is a necessary structural feature of capitalism. Market discipline should also extend to corporations; the Neoliberals have long proselytized for the extension of market-like incentives within corporate boundaries. Outsourcing and outsized CEO recompense are direct corollaries. Gargantuan firms are not a serious problem, since they merely are a reflection of fleeting market success; antitrust should be jettisoned, and there is no long-term problem of Too Big to Fail.
America's Descent Into Madness
By Henry Giroux
August 12, 2013
CounterPunch
In the past, public values have been challenged and certain groups have been targeted as superfluous or redundant. But what is new about the politics of disposability that has become a central feature of contemporary American politics is the way in which such anti-democratic practices have become normalized in the existing neoliberal order. A politics of inequality and ruthless power disparities is now matched by a culture of cruelty soaked in blood, humiliation, and misery. Private injuries not only are separated from public considerations of such narratives, but narratives of poverty and exclusion have become objects of scorn. Similarly, all noncommercial public spheres where such stories might get heard are viewed with contempt, a perfect supplement to the chilling indifference to the plight of the disadvantaged and disenfranchised.
Peering Into the Rotting Entrails of the Intellectual Right
By Andrew Sullivan
August 13, 2013
The Dish
[Moderator's note: As we read Andrew Sullivan, conservative intellectuals are reverting to their Bircher nutball roots, leaving the red diaper renegades Ronny Radosh & Davy Horowitz all alone in opposition to the resurrection of hardcore, open McCarthyism. Irony duly noted.]
There appears to be nothing ever too far to the right, and the fervor of the true believers increasingly eclipses the worries of the doubters.
Even the people who lived their intellectual lives as passionate, revisionist anti-Communists and anti-anti-anti-Communists are now outliers in the conservative ranks.
Just Flip the Switch
By Gavin Mueller
August 12, 2013
Jacobin
Trailers for Elysium were like catnip for the left-leaning viewer: a near future where the masses, stranded in crumbling cities, outfit Matt Damon with a robot suit and send him to fight the bourgeoisie, who have Galted off the planet to Space Station Elysium, taking their shrubbery, Spanish-style mansions and cancer cures with them. It promised to be an allegory about class struggle as transparent as director Neill Blomkamp's first movie, District 9, was about racial apartheid. The 99-vs-1 narrative would finally get the sci-fi blockbuster treatment it richly deserved.
Blomkamp goes for hyper-edited punch-ups instead of continuing to flesh out his futuristic universe. It undercuts the pleasures and politics of dystopian science fiction: imagining all the contours of a future world, taking current-day trajectories to possible ends, and thus evaluating the present by the future we are likely creating.
Hardhats and Hippies: An Interview with Penny Lewis
June 3, 2013
Jacobin
I look at the hardhat rally that was the iconic moment in May 1970 and the few weeks that followed that. The first term of the Nixon administration is when the very diverse movement that at that point had finally taken hold and begun to express itself in many different places, including the military, veterans, civil rights and Black Power, nationalist movements, the labor movement, had begun to engage in anti-war protest at exactly the moment that the movement was taking this much more diverse turn.
The discussion around class in this country shifted to capture this image, and this is what I challenge at the end of the book, of these "middle Americans" who are not being represented by any of the social movements of the day and are not being represented by the political parties and by the media, and there's an overcorrection on the part of the media and an opening that's created for Nixon to label these people the "silent majority" and make sense of what appeared to be a large group of people who were left out of the social movements of the day. The real outlines of the memory that we carry with us were created by pretty powerful forces at the time and there weren't any kind of sufficient forces on the ground then or today to challenge that central image.