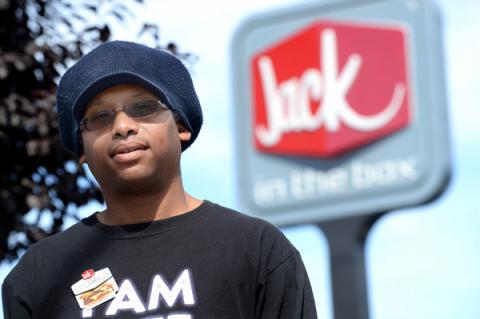 Semaj Ransom photographed outside of a Jack in the Box in Hayward, Calif., on Saturday, Aug. 24, 2013. Ransom, 39, is an example of the changing work force in the fast food industry, once dominated by teenagers., Dan Honda/Bay Area News Group

Low-wage workers in fast-food restaurants around the Bay Area are planning to strike Thursday as part of a swelling national movement to raise pay in one of the fastest-growing industries.

Drawing on support from religious leaders and community organizations, fast-food workers will walk out at dozens of restaurants in 10 cities from Richmond to Fremont. They will join potentially thousands of strikers across the country to demand a $15 hourly minimum wage, improved benefits and the right to form unions.

The one-day strikes -- timed for Labor Day and the 50th anniversary of the historic civil rights-era March on Washington for Jobs and Freedom -- are the culmination of months of fast-food walkouts that began on the East Coast, organized by New York-based grassroots movement Fast Food Forward, and have rippled across the country. At least three protests are planned in Oakland, with community groups including the Alliance of Californians for Community Empowerment and Jobs with Justice leading the effort. One gathering is scheduled for Thursday afternoon at the Labor Temple Association of Alameda County on Enterprise Way. Strikes are not planned for Bay Area cities farther south than Fremont and are not expected to shutter restaurants.

Industry experts and labor allies say the strike illuminates the difficulty of surviving on minimum wage, and they argue that the below-poverty-level pay persists even as fast-food corporations have blossomed into multibillion-dollar businesses. The state's $8-per-hour minimum wage is slightly higher than the nation's $7.25. San Francisco has the nation's highest at $10.55 per hour while San Jose recently voted to raise the minimum wage to $10.

The fast-food industry counters that raising wages to the $15-per-hour minimum would drive up the cost of food by one-third, deterring consumers and resulting in layoffs. Most restaurants are franchises that operate like small businesses with profit margins of 5 percent or less, said Angelica Pappas, communications director for the California Restaurant Association, the state chapter of the industry's lobbying group. Salazar says she earns $8 per hour after more than a year on the job. She has three children and helps care for her mother. A diabetic, she is worried about not having benefits but said it's hard to leave. Before McDonald's hired her, she was unemployed for about two years.

"I'm so proud of finally having a job," said Salazar, 37. "I just hope my job will pay me more because I'm working so hard."

McDonald's said in a written statement that its restaurants offer competitive pay and benefits and training opportunities for employees to move into better careers.

"Our history is full of examples of individuals who worked their first job with McDonald's and went on to successful careers both within and outside of McDonald's," according to the company.

Earning $15 per hour, a full-time fast-food worker would make about $30,000 per year. That's still less than half the $64,000 salary a family of one adult and two children under 12 needs to meet the most minimal housing, transportation, health care and food costs in Contra Costa and Alameda counties, according to the Oakland-based Insight Center for Community Economic Development.

In interviews arranged by protest organizers with East Bay fast-food workers, employees reported earning minimum wage or just a few cents more after many years on the job. They told of struggling to raise children, save money or buy a car, even when working more than 40 hours a week. Many rely on public assistance, and some said store managers regularly cut hours to keep costs down.

Semaj Ransom, 39, was hired in February at Jack In the Box on West Tennyson Road in Hayward for a full-time position but said he rarely receives a full schedule.

Ransom, who makes $8.50 an hour, said he will strike on Thursday, joining workers from establishments that include Pizza Hut, KFC, Subway, Burger King, McDonald's, Taco Bell, Carl's Jr. and Wendy's.

Jack In the Box did not respond to questions from this newspaper, and several other fast-food establishments contacted also did not reply to similar requests for comment. Burger King said its restaurants are "an entry point into the workforce for millions of Americans," and the company offers employees and their families college scholarships.

Pappas rebuffs the notion that fast-food jobs keep working parents in poverty. For most workers, she says, fast food is an entry into the workforce to learn basic job skills such as punctuality and cleanliness.

"There's plenty of opportunity in the industry to move up or move out," Pappas said. "I think the characterization of these people trying to raise families of five on minimum wage is a huge mischaracterization."

But an August 2013 study by the Center for Economic and Policy Research, a think-tank in Washington, D.C., found that 40 percent of fast-food workers are age 25 and older, and more than a quarter of all workers are raising children.

"We're talking about adults and young adults," said Brian K. Woodson Sr., pastor at the Bay Area Christian Connection in Oakland and member of Faith Alliance for a Moral Economy, a faith-based group supporting the protest. "We're talking about caretakers of children, and they need to have a living wage."