What's needed in Syria is not military intervention, but a global peace offensive. 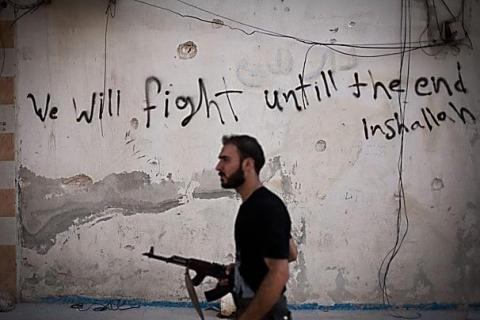 (Note: Rob Prince teaches at the Korbel School of International Studies. Although tangentially, he has been associated with the University of Denver's Center for Middle East Studies and has participated in a number of its public forums, including on the Syrian crisis. Compelled to respond to the February 11, 2014 op-ed in the New York Times by colleagues, Nader Hashemi and Danny Postel, he critiques their arguments and makes alternative suggestions for ending the Syrian impasse.)

At a moment when the only viable path open to resolving the Syrian conflict lies in a negotiated settlement between the Assad government and the legitimate opposition, two colleagues at the University of Denver's Korbel School of International Studies, Nader Hashemi and Danny Postel of the Center for Middle East Studies, have put forth an emotional and poorly conceived call for military intervention to resolve the escalating humanitarian crisis there.

Using logic tinted with Cold War reasoning (blaming the Russians is bit out of fashion) and poor examples (Somalia - 1993?) to bolster their arguments, they put forth their ideas on the subject in an op-ed, in the New York Times on February 11 titled "Use Force To Save Starving Syrians." In a one-sided appeal, they place the blame for the Syrian human debacle almost entirely at the feet of the Assad government for virtually all of the violence.

At the same time, the role of Salafist Islamic militants (trained and funded by the Saudis, Qatar, Turkey, and ultimately supported and manipulated by Washington) is minimized if not denied. Yet it is these elements who have, to a great degree, essentially hijacked a legitimate Syrian opposition movement, internationalized the struggle and continue to wreak havoc and death in their goal to establish Shari'a law in Syria and beyond.

Russia is criticized for failing to restrain the Syrian government's military actions but no similar demands - none at all - are made of the United States and the Saudis to rein in "allies" fighting in the field. Nor is any weight given to the extensive human, infrastructural and cultural damage these Islamic fundamentalist elements have done or to their utter viciousness, cruelty and politically retrograde nature.

Calling for military intervention as a way to end or at least reduce the bloodshed in Syria does pull at certain ethical heartstrings. But it is, at best, a desperate appeal, and at worst, quite frankly, a cynical move meant to give cover to a not especially humane long-term geopolitical considerations.

Indeed, perhaps the sorriest assumption of their argument is that the United States can save the day and end the humanitarian tragedy in Syria by riding in on its white heavenly horse laden with cruise missiles and drones. Are they forgetting Washington's long record of supporting totalitarian regimes in exchange for oil in the Middle East and elsewhere, and whose involvement in the Syrian tragedy is, incidentally, far from innocent?

One must make a distinction between "humanitarian intervention" in times of war, and military intervention using humanitarian pretexts. The latter actually has a very long and sordid history going back several hundred years and has been used by virtually every colonial and neocolonial military intervention and massacre. It is nothing new, although lately, through the thinking of certain American intellectuals (Samantha Powers and others) it has been given a new intellectual gloss.

Pulling out the "humanitarian" pretext has become more in fashion in this post-Cold War era when the United States can no longer argue that countering the "Soviet threat" is a pretext for political and military intervention. Even during the Cold War, the United States would frequently invoke a humanitarian pretext (intermingled with anti-communism) for its Third World interventions, C.I.A. coups, whatever. The bodies of hundreds of thousands of Chileans, Argentinians, Brazilians, Guatamaltecos, Nicaraguans, Salvadoreans, litter the fields and oceans as evidence of the results of that policy.

Of late the swan song of "saving the natives from humanitarian disaster" has been cultivated into a fine art by the French in Africa in their attempt to re-position themselves to insure their share of that continent's strategic assets, most recently in Mali and now in the Central African Republic. Washington is learning from Paris how to refine the argument. What is usually omitted or denied is the degree to which (in the case of the French in Mali or the U.S. in Syria) French or American behind-the-scene machinations contributed to the crises exploding in the first place. This is certainly the case for U.S. political activities in Syria - publicly calling for a negotiated solution - less openly training, arming, and financing some of the most dastardly elements in the Middle East to bring down the Assad Regime (or getting regional allies to do so).

Naomi Klein's Shock Doctrine aptly applies to what the United States did in Libya (it was Washington pulling the strings even if the French took the lead in the bombing campaign) and what it has tried to do less successfully in Syria: use the pretext of humanitarian intervention to garner public support for a military-initiated regime change. Follow that up with U.N. Security Council support for limited military actions to give the cover of international law to the operation. Immediately violate the U.N. mandate by unilaterally extending the scope of the approved mission. Get as many "allies" on board to do the fighting to extend the weight of the "coalition of the willing."

Once the regime change has been accomplished, the societies are restructured along neoliberal lines making for easier economic penetration and exploitation, their formerly more centralized governments fractured in one way or another. Once the fighting is over, offer World Bank and/or IMF structural adjustment aid to restructure the battered economies and infrastructure along neoliberal lines.

In calling for military intervention in Syria - something not even the U.S. military itself is particularly enthusiastic about - Hashemi and Postel cozy up, as they have before on Iran in 2009 and Libya in 2011, with the likes of AIPAC, along with this country's band of intrepid and misdirected neoconservatives. These are the same elements that pushed this country into invading Iraq and continue to push the Obama Administration to intervene militarily in Syria.

What would be worse at the moment than a U.S.-led military intervention in Syria which has the possibility of aggravating an already destabilized region that much more and probably drawing in other players including Iraq, Iran and possibly Russia. The military situation on the ground over the past year has shifted dramatically in favor of the Assad government and its allies reducing Washington's goal of regime change in Syria considerably.

The inner workings of the Obama Administration's decision not to attack Syria last September remain hazy. Perhaps someday the deeper logic of the decision to pull away from the abyss will come to light. They seem to include both regional considerations as well as Washington's desire, not to be exaggerated, to shift American strategic attention to Asia. The concern that military operations in Syria could result in Iraq or Afghanistan-like debacles for US policy probably figured into the decision. U.S. (or U.S.-led) military intervention is not likely to improve the humanitarian tragedy unfolding in Syria but to worsen the already bleak reality that much more. There are no assurances - none - that it would in any way resolve the conflict.

Along with near global opposition to such a plan of action, the futility and probable negative results of an attack is figured large in the Obama administration's decision not to initiate military action last September to the relief of much of the world. Whatever, that decision not to pull the military lever against Syria, followed by Washington's opening for negotiations with both Syria and Iran, are some of the (few) wiser decisions that Obama had made on Middle East policy since coming to office in 2008.

Rather than ratcheting up the dangers of the Syrian explosion, is it not the time to do just the opposite? Should we not, instead, press for a negotiated political solution to a conflict that has proven it will have no military solution? Admittedly, the Geneva negotiations over Syria to date have been little more than a charade, but then are we - the world - not in a better place wrangling over how to settle the Syrian crisis politically rather than fighting over which targets U.S. drones and Cruise missiles might be targeting?

The failure of this round (Geneva II as it is called) cannot be blamed, as the authors do, on Russian machinations. To the contrary, Russia and most particularly its foreign minister, Sergei Lavrov, are looking more like the peacemakers in the Syria crisis than is Washington. Global public opinion recognizes very clearly that the Russians have played a positive, if not decisive, role in moving the Syrian crisis from big power military confrontation to negotiations while the Obama Administration's approach is more confused and contradictory.

In a sharp U-turn away from military confrontation, having agreed to multi-party negotiations on Syria, the Obama Administration has gotten cold feet about pursuing the Geneva process seriously. The fact of the matter is that there is no way, none, that Washington can "resolve" the Syrian crisis independently on its own or to its liking. The Obama Administration plan for "regime change" in Syria - what it has been working for now for several years - is dead in the water.

What is the alternative vision to ending the humanitarian crisis in Syria...What can be done to stop the bleeding? The following are some steps I would recommend that might just make considerably more impact than bombing Damascus or sending U.S. troops to die in yet another senseless Middle East war. It is a global peace offensive that is needed, not military intervention.

1. That the international community could and should call on all parties to initiate an immediate multi-sided ceasefire. Of course pressure from outside allies would be key. If it would expected that the Russians and Iranians would hold the Syrians to task, it would also be expected that the United States and the Saudis would hold their allies on the ground to the same standard.

2. The recruiting, training, arming of all foreign mercenaries should end.

3. Assuming that the ceasefire could be established, then a massive humanitarian aid program, directed by the United Nations, supported by a Security Council resolution should be implemented as soon as possible.

4. The Geneva Peace Process has to be actively supported. Frankly, as Ibrahim Kazerooni and I have stated on our radio program, in our op-eds for the past three years, in public forums and elsewhere, there can be no military solution to the Syrian crisis. It can only be resolved politically and diplomatically.

5. The Geneva negotiations should center on talks between the Assad government and the legitimate Syrian opposition. By the latter is meant, those domestic opponents to the regime, whose grievances against the government are long-standing (and genuine) and whose roots in Syrian society are organic and undisputed. Such negotiations need to be pursued without preconditions beyond maintaining the ceasefire.

6. The Obama Administration has to be more engaged in the multilateral Geneva peace negotiations. While Washington made an important decision by not going to war last September, it seems to be essentially paralyzed in moving the negotiating process. Once again, it is time for Obama to once again show the political courage he showed the world in September by pressing the United States to negotiate seriously in Geneva and not let his domestic political opponents Syrian policy (neo-conservatives, AIPAC) once again gain the upper hand.

[Rob Prince, whose teaching title has changed five times in the past 20 years, although the job is the same, is Teaching Professor at the University of Denver's Korbel School of International Studies. In recent years, he has written extensively on North Africa. He is also the publisher of the Colorado Progressive Jewish News.]