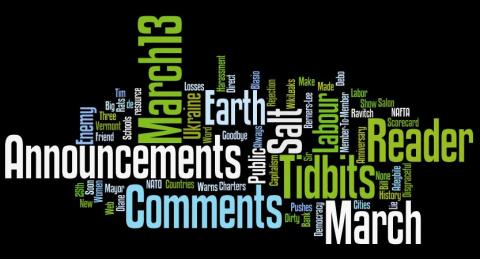 Re: The Big Lie about Mayor Bill de Blasio and Charters

Apartheid in the public schools, brought to you by the privatized charter school movement?

This is really good

This is a good article, learn things I was not aware, wish the mayor would say all this publicly so folks can understand what its all about

This is the BEST short piece I have read.  I have dozens of articles for my classes, but this is short, sweet and obvious.  thanks, Thanks, Thanks Conn Hallinan and Portside.

Ukraine: The Enemy of Your Enemy is Not Always Your Friend

This is a most useful piece. In the article are links to Ukrainian Nazi propaganda vids. They are chilling.

Re: The Disgraceful Rejection of Debo Adegbile

Scott Lemiuex's "Certainly, Abu-Jamal is not my idea of a hero..." is the typical liberal disclaimer when they try to explain to the Right (Dems or GOP) why they oppose their vote against anything that deals with Mumia Abu Jamal, US political prisoners, Assata Shakur and the racist base of the US prison industrial complex.

I believe that Mr Lemiuex has read some- if not all -of the writings of Mumia and has chosen to ignore/deny this award winning journalist's heroic courage to speak Truth to Power and be the Voice of the Voiceless while imprisoned for decades.

Too many liberals have always accepted the racist convictions of innocent Blackfolk (Remember the Scottboro Boys case and recently, the Central Park 5 Case, to name just two) and worked their opinions from that point.

Re: Salt of the Earth: Made of Labour, By Labour, For Labour

Zinc then, copper now. NM is still a colony of mining.
Dahr Jamail | New Mexico: Where Polluting Groundwater Is Legal 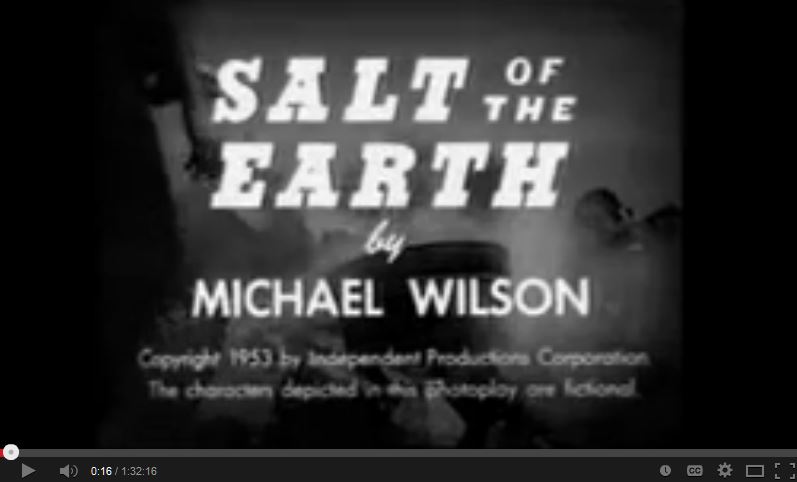 Revisiting a union-backed film far ahead of its day. As a student, I saw it in East Bay at one few theaters that dared to show it in 1954- now the Albany Twin on Solano just off San Pablo.

We showed it at the occupied Peoples Firehouse in Williamsburgh Brooklyn back in 1977.   The workingclass people of that community, fighting hard to get this crucial public service restored, loved the film !  (And these folks were no 'radicals' !)

The role of women in this film (and their fight to be treated as equals with the male minors in the struggle) was particularly impressive and resonated extraordinarily well among the women of the Northside, whose role in the fight to win restoration of Engine 212 was absolutely central to our ultimate victory there.   The fact that these were Latino working people of color presented no problem for our socially conservative, Democratic-voting heavily white Polish/Eastern European constituency there.   I think they related so well because as WORKERS they felt the connection to those portrayed in the film.

Who knows?  Perhaps the film helped us all not only to keep up our spirits but raise the level of our creative militancy.   We never gave up, we engaged in various forms of  mass nonviolent active resistance (starting with the many-months-long occupation of the firehouse itself), rarely going more than a two-three weeks without taking action,;and we reached out and responded in solidarity with  other communities too.   A great fight!  (And ultimately we WON MORE THAN WE HAD LOST  in terms of fire protection .. a victory that lasted some thirty years until  Bloomberg came along and the community had largely changed/ lost its collective memory of these struggles, all conducted during the darkest days of the so-called Fiscal Crisis.

Re: Say Goodbye to Public Schools: Diane Ravitch Warns Salon Some Cities Will Soon Have None

If you are a believer in real comprehensive education that prepares students for an empowered life, this is a horror story.

Re: Member-To-Member Harassment: What To Do
(posted on Portside Labor)

REALLY difficult to handle...."I'm a member too!"....and if the harasser is an African-American Male and harassee is White Female...and both union members ...and union rep is White Male....and management...well, don't expect any help there....they are running so fast from the problem...but only after they have disciplined the alleged harasser based on profiling and not facts....

Believe it or not ...turned it into an educational experience....and settled in the best interests of both parties...

But unions (as in most other cases) do not give their staff any training to handle such situations.....worked as a Rep for 30 years...never a word....

Re: The Scorecard of NAFTA: Losses for All Three Countries

This analysis is cogent and a tour de force. It is all too true. In Canada there was an election on the FTA and NAFTA. With our first past the post system the government won but the majority of voters in several parties voted against it. Unions, nationalists, church groups, environmentalists all predicted what has in fact happened.

Far from free trade we now have enormous accumulations of power, money and influence, which will be hard to reverse without a lot of political change. I think one small way to at least have peace of mind is to work to create an alternative economy of local businesses, food, shops, banks, co-ops so that some of us have alternatives as consumers.

Eventually with climate change crises this system will implode. But it is too bad that those who believe in fairness and democracy and in wealth spread around to most people were not able to stop the multinationals from coming to dominate everything.

A new, populist, explicitly anti-capitalist party must emerge and start organizing at the grassroots level to build power over time. And this new political party must be led by and represent the young, the unemployed, underemployed and misemployed, ...

Neurobiologists from the University of Chicago have discovered that rats display empathy-like behavior toward other rats, but the basis of that empathy is environmental, rather than genetic. The creatures aren't born with an innate motivation to help rats of their own kind, but instead those with whom they are socially familiar. - Washington Post, Jan. 15, 2014

If they hadn't been speaking of rodents,
I'd have known whom the scientists meant.
Their description is perfectly suited
To apply to the one percent.


Re: In Show of Direct Democracy, Vermont Pushes for Public Bank

The details of this are not clear to me but the idea seems timely or, as usual, years too late.

One thing I'd ask Vermonters to think about is a state-issued credit-card, probably with low available credit, to help poor people with credit and to help children (whether or not poor) to learn how to use credit cards responsibly.

In recognition of International Women's Day and Women's History Month (March) and to introduce the new labor history lessons we just posted, we will share stories all month about women fighting for the rights of workers. Check out the new lessons for teaching labor history, from the book Power in Our Hands, available for free online at the Zinn Education Project website: http://zinnedproject.org/materials/women-in-labor-history/

Learn about the women pictured here and many more on this page. 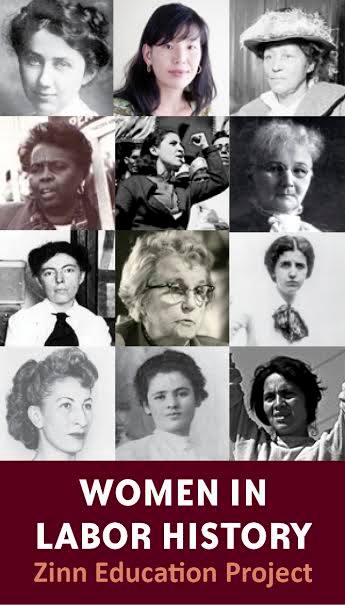 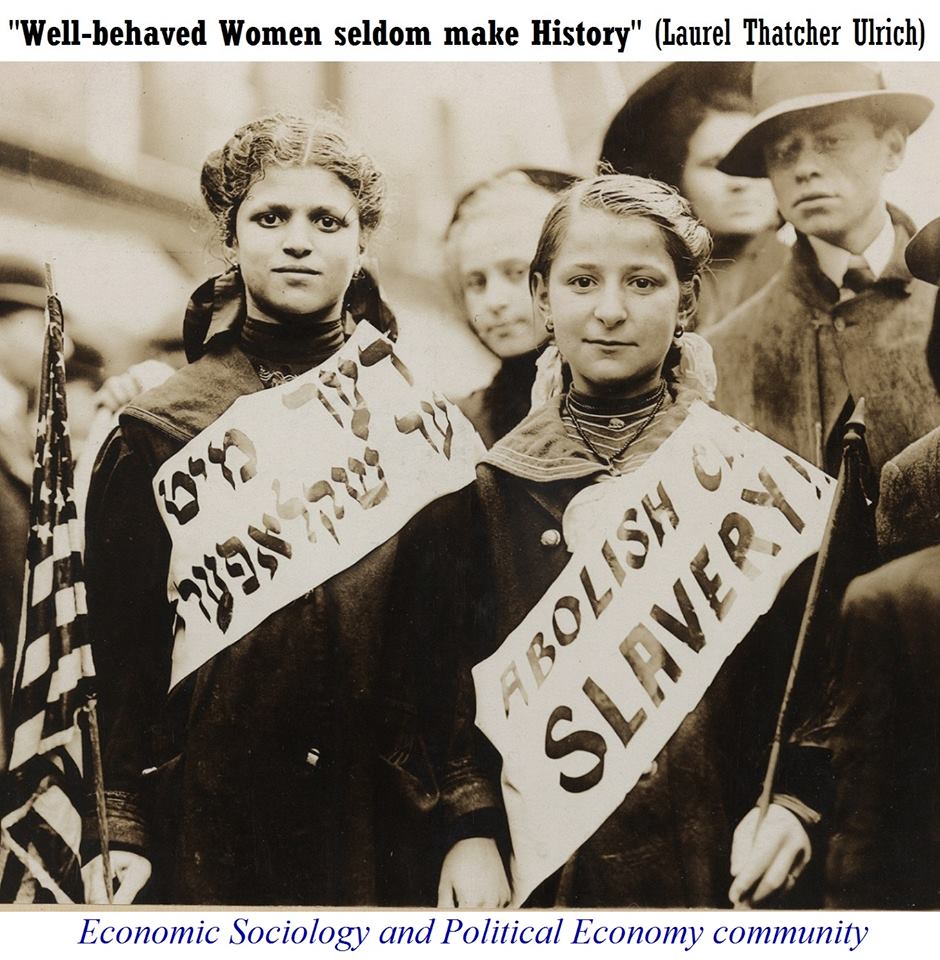 25th Anniversary of the Web

This year we celebrate the 25th anniversary of the Web. The Web has without doubt transformed our lives in the US, but some debate its true impact. Has the Web tended to bring us together or polarized discourse? Has easy access to information improved our policies and decision-making, or has it amounted to noise?

This study and others conducted by the Pew Internet & American Life Project and Elon University provide us with raw data and valuable insights on many of these pressing questions. As one example, we can put to bed the question of whether people feel the Internet brings them together or isolates them: This survey tells us that most connected users in the US believe the Web has strengthened their relationships.

As the Web enters its next quarter century, we urgently need even more data to inform the current debate on what it will take to enhance and defend the Web. The Web community - and the world at large - are wrestling with tough issues around security, surveillance, privacy, open infrastructure, net neutrality, content protection, and more. These global decisions must be made based on the best possible information.  When the deep Pew Research Center analysis in the US and data from global studies such as the World Wide Web Foundation's Web Index are considered together, they can inform decisions that will shape our world.

We have built an amazing resource over a short 25 years. I believe it is vital enough that we must all take greater action to enhance and defend it. Need more insight into just how valuable the Web can be in the USA and why? These reports http://www.pewinternet.org/web25 will set you on your way.

Sir Tim Berners-Lee, the inventor of the World Wide Web

Treaty on the Non-Proliferation of Nuclear Weapons (NPT)

The NPT is a landmark international treaty whose objective is to prevent the spread of nuclear weapons and weapons technology, to promote cooperation in the peaceful uses of nuclear energy and to further the goal of achieving nuclear disarmament and general and complete disarmament. The Treaty represents the only binding commitment in a multilateral treaty to the goal of disarmament by the nuclear-weapon States. Opened for signature in 1968, the Treaty entered into force in 1970. On 11 May 1995, the Treaty was extended indefinitely.  A total of 190 parties have joined the Treaty, including the five nuclear-weapon States. More countries have ratified the NPT than any other arms limitation and disarmament agreement, a testament to the Treaty's significance. 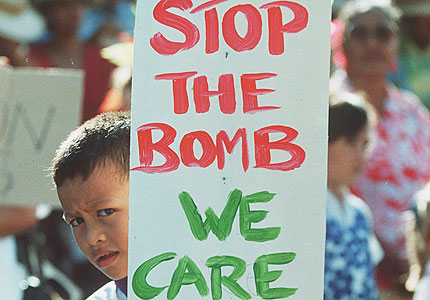