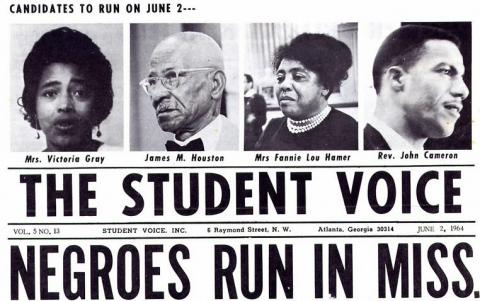 Fifty years ago this June, Mississippi Freedom Summer began. Under the direction of Bob Moses, the Student Nonviolent Coordinating Committee (SNCC) organizer who had been doing voter registration in Mississippi since 1961, Freedom Summer sought to challenge the racism of the state that with its long history of lynching (534 between 1882 and 1952) epitomized how far the Deep South would go to preserve segregation.

The broad link between America's racial past and present is one that Bob Moses, now in his seventies, finds compelling. When I interviewed him earlier this year, we talked at length about Freedom Summer, but what preoccupies Moses today is continuing to organize around the changes Freedom Summer sought to make permanent.

I'm a member of the cohort of Southerners in our fifties and sixties from once-notorious places. A number of us are drawn to returning to our hometowns' unsavory truths, their discussion no longer off-limits after 50 years. Yes, it has taken this long.

However healthy the recent public ceremonies of racial apology have been - Philadelphia, Jackson, and the University of Mississippi have all had well-attended earnest ones to mark milestone anniversaries - they are a generalized, less personally searing way to confront history. The private excoriations I'm talking about don't aim for - or produce - the outward social good of the community-scale efforts carried out by admirable groups in the state like the William Winter Institute of Racial Reconciliation, the Mississippi Center for Justice, the Neshoba Youth Coalition, and HOPE. Even so, I have to believe the one-human, one-story truth-tellings of late are necessary. Maybe the public efforts had to happen first to make broaching the personal experience of the siege atmosphere of our childhood possible. That's how psychological growth works, after all; as a patient develops a stronger, healthier sense of self, the capacity to examine her pain and failure increases. That applies to cultures along with people. First apologize, then face the for-whats.

The Bill of the Century

By the time the Civil Rights Act reached the Senate floor for debate in March 1964, the pro-segregation Southern wing of the Democratic Party - a minority, but a minority packed with talented senior legislators - had blocked hundreds of civil rights bills.

As expected, the act, which included bans on discrimination in jobs, schools, and public accommodations, was immediately filibustered. At the time less than half the Senate supported cloture. Many of the opponents were Southerners, but many others were conservative Republicans who opposed segregation but were wary of expanding federal power. So while Southerners filibustered on the chamber floor, the bill's backers - both Democrats and Republicans, along with hundreds of civil rights activists - lobbied, wheedled and sometimes outright threatened the holdout senators to change their votes.

It took more than two months, but by the second week of June, the bill's leadership figured they were close enough to try for a cloture vote. They only had one shot: If cloture failed, Southerners would have a new burst of momentum behind the filibuster, enough to kill the bill. But if it succeeded, the bill would advance to a final vote and almost surely become law - and change the country forever.

State legislators who support voter ID laws are motivated in no small part by racial bias, according to a new study from the University of Southern California. The study finds strong evidence that "discriminatory intent underlies legislative support for voter identification laws."

The significant difference between ID supporters and opponents in the extent of their Anglophone preference provides solid evidence of underlying bias, according to the researchers.

"The fact that legislators supporting voter identification responded so much l to the Latino name is evidence anti-Latino bias, unrelated to electoral considerations, might be influencing these public policies," they write. "The same elites who propose and support legislation to restrict Latino voting rights also provide less non-policy responsiveness to Latino constituents, at least in the context examined here. This means that the quality of representation is poor for many Latino constituents."

More to the point, these findings raise serious questions about the legality of voter ID laws.

The Right's Turn Away from Representative Government

The Republicans have concluded that the path to electoral victory isn't to craft the better campaign or come up with the most broadly appealing policies, but to control the shape of the electorate by making it smaller.

It's really taking on an ugly tone, with expressions of racism and xenophobia combined with a growing disdain for our democratic system of government. When you combine it with the libertarian strain in the GOP, it really begins to resemble fascism, because it's nationalistic, race-based, often pro-corporate (although it has populist anti-corporate elements, too), anti-immigrant, and basically revolutionary in its opposition to the central government. Add in the attraction to pseudoscience and "creating their own facts," its basic anti-intellectualism, its source of strength with the "job-creating" small entrepreneurs (anti-communist bourgeoisie) and you begin to see too many parallels with the fascists of old.

A Perversion of the Past

The central narrative premise of the film Mississippi Burning sets up the FBI as the sole heroic defender of the victims of southern racism in 1964, which is more than a little disgusting. Embracing the premise unconditionally--unless one counts a single fleeting remark from a redneck, to a journalist, that "J. Edgar Hoover said Martin Luther King was a Communist," which the film neither confirms nor privileges--the film tampers more than a little with historical facts: it subverts the history of the civil rights movement itself.

It's true that the FBI did conduct a detailed and extensive investigation, file name "Mississippi Burning," in the summer of 1964, before the bodies of Chaney, Goodman, and Schwerner were finally found under more than ten tons of earth. But a look at the context of this investigation, which the movie can't be bothered with, tells us a lot more. Two of the three missing civil rights workers came from well-to-do white families. After the 1963 assassination of John F. Kennedy the FBI's prestige was conceivably at an all-time low; Lyndon Johnson had signed the 1964 Civil Rights Act into law on the same day that Hoover finally announced his intention to open an FBI office in Jackson, Mississippi; and apparently Johnson had to twist Hoover's arm in the bargain. (As I.F. Stone wrote in 1961, "Mr. Hoover has made it clear that the FBI acts in civil rights cases only because ordered to.")

"1964 . . . Not Forgotten" is the final message of the movie--the words appear on the chipped, defaced tombstone of one of the slain activists--but it's hard to forget something that isn't known in the first place, much less remembered. The movie purports to re-create the past and to tell us what it meant, but the ignorance of Mississippi Burning is so studied that it only can be accounted for as a bulwark against knowledge, a denial of history for the sake of striking a glib and simple and easily digestible attitude against injustice.