labor In the Future, Will There be Any Work Left for People to Do?

Driverless cars are safer than human-driven ones. Computers can predict Supreme Court decisions better than legal scholars. What’s next? 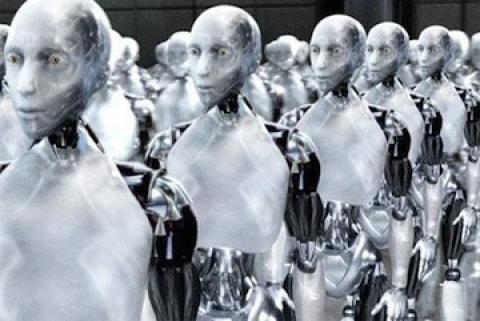 I am standing on a stage, behind a waist-high podium with my first name on it. To my right is a woman named Vicki; she’s behind an identical podium with her name on it. Between us is a third podium with no one behind it, just the name “Watson” on the front. We are about to play Jeopardy!

This is the National Retail Federation’s mammoth annual conference at New York City’s Javits Center, and in addition to doing some onstage moderating, I have insanely agreed to compete against IBM’s Watson, the cognitive computing system, whose power the company wants to demonstrate to the retailers. Watson’s defeat of Jeopardy!’s two greatest champions is almost a year old, so I’m not expecting this to go well. But I’m not prepared for what hits me.

We get to a category called Before and After at the Movies. First clue, for $200: “Han Solo meets up with Lando Calrissian while time-traveling with Marty McFly.”

Watson has already buzzed in. “What is The Empire Strikes Back to the Future?” it responds correctly.

It picks the same category for $400: “James Bond fights the Soviets while trying to romance Ali MacGraw before she dies.” I’m still struggling with the concept, but Watson has already buzzed in. “What isFrom Russia With Love Story?” Right again.

By the time I figure this out, Watson is on the category’s last clue: “John Belushi & the boys set up their fraternity in the museum where crazy Vincent Price turns people into figurines.” The correct response, as Watson instantly knows, is “What is Animal House of Wax?” Watson has run the category.

I do get some questions right in other categories, and Watson gets some wrong, but at the end of our one round I have been shellacked. I actually don’t remember the score, which must be how the psyche protects itself. I just know for sure that I have witnessed something profound.

Realize that Watson is not connected to the Internet. It’s a freestanding machine just like me, relying only on what it knows. It has to hear and understand the emcee’s spoken words, just as I do. In addition, Watson has a built-in delay when buzzing in to answer a clue. We humans must use our prehistoric muscle systems to push a button that closes a circuit and sounds the buzzer. Watson could do it at light speed with an electronic signal, so the developers interposed a delay to level the playing field. Otherwise I’d never have a prayer of winning, even if we both knew the correct response. But, of course, even with the delay, I lost.

So let’s confront reality: Watson is smarter than I am. In fact, I’m surrounded by technology that’s better than I am at sophisticated tasks. Google’s  autonomous car is a better driver than I am. The company has a whole fleet of the vehicles, which have driven hundreds of thousands of miles with only one accident while in autonomous mode, when one of the cars was rear-ended by a human driver at a stoplight. Computers are better than humans at screening documents for relevance in the discovery phase of litigation, an activity for which young lawyers used to bill at an impressive hourly rate. Computers are better at detecting some kinds of human emotion, despite our million years of evolution that was supposed to make us razor sharp at that skill.

One more thing. I competed against Watson two years ago. Today’s Watson is 240% faster. I am not. And I’ll guess that you aren’t either. Most things in our world slow down as they get bigger and older: A small startup can easily grow 100% a year, but a major Fortune 500 firm may struggle to grow 5%. Technology isn’t constrained that way. Today’s systems, as awesomely powerful as they are, will be 100% more awesomely powerful in two years. In a decade they’ll be 32 times more powerful.

The issue, a momentous one, is obvious. In this environment, what will be the high-value skills of tomorrow, the jobs that will pay well for us and our kids? That eternal concern increasingly comes down to this stark query: What will people do better than computers?

Several factors are combining to make the question especially urgent now. The economy’s sorry job-generating performance has left economists struggling for an explanation. For decades the U.S. economy regularly returned to pre-recession employment levels about 18 months after the recession started; this time it took 77 months. How come? Why are wages stagnating for wide swaths of the U.S. population? Could advancing technology be part of the reason?

For over two centuries the answer to that last question has been clear: No. Practically every advance in technology has sparked worries that it would destroy jobs, and it did destroy them — but it also created even more new jobs, and the improved technology made those jobs more productive and higher paying. The fears of Luddites past and present have always been unfounded. Technology has lifted living standards spectacularly.

That orthodoxy, one of the firmest in economics, is now being questioned. Larry Summers, star economist and former Treasury Secretary, delivered a significant lecture to an audience of top economists last year in which he said, “Until a few years ago I didn’t think this was a very complicated subject; the Luddites were wrong, and the believers in technology and technological progress were right. I’m not so completely certain now.”

Observing the increasingly sophisticated tasks that computers are doing better than humans — and the growing percentage of men ages 25 to 54 who aren’t working — Summers announced a portentous conclusion: “This set of developments is going to be the defining economic feature of our era.” No less an authority on technology than Microsoft co-founder Bill Gates agrees: “Twenty years from now, labor demand for lots of skill sets will be substantially lower. I don’t think people have that in their mental model.”

Even without reducing total jobs, technology has been changing the nature of work and the value of particular skills for over 200 years, since the dawn of the Industrial Revolution. The story so far comprises just three major turning points. At first, the rise of industrial technology devalued the skills of artisans, who handcrafted their products from beginning to end. A gunmaker carved the stock, cast the barrel, engraved the lock, filed the trigger, and painstakingly fitted the pieces together. But in Eli Whitney’s Connecticut gun factory, separate workers did each of those jobs, or just portions of them, using water-powered machinery, and components of each type were identical. Low-skilled workers were in demand, and skilled artisans weren’t.