Recent policy developments, primarily the Affordable Care Act's Medicaid expansion, have the potential to improve access to health care for women who aren't eligible for Medicaid under current requirements. But 19 states, including most in the South where maternal mortality rates are higher, have opted out of Medicaid expansion. Georgia, for example, has 838,000 uninsured women, more than 25 percent of whom are African American. 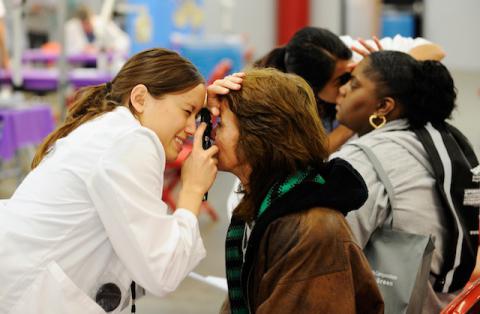 A report released in August by the Center for Reproductive Rights, the National Latina Institute for Reproductive Health and Sistersong Women of Color Reproductive Justice Collective paints a distressing picture of the health conditions facing black and Latina women in the United States. The report, "Reproductive Injustice: Racial and Gender Discrimination in U.S. Health Care," was written for U.S. government officials and the United Nations committee tasked with reviewing compliance with the International Convention on the Elimination of All Forms of Racial Discrimination (ICERD). It makes a compelling case that the U.S. is in direct violation of ICERD based on the health care access and health outcomes associated with certain populations in the U.S.

One of the more frightening findings in the report, which focuses on black women in Georgia and Mississippi and Latinas in South Texas, is one that has received increased attention in recent years-the continued crisis of maternal mortality in the United States, particularly for black women. I've written about this topic before for Colorlines, but the situation continues to worsen with each new examination of our statistics.

Between 1990 and 2013, the overall maternal mortality ratio grew by 136 percent, from 12 maternal deaths for every 100,000 live births to 28 for every 100,000 live births. That increase coincides with a period during which a majority of other countries dramatically reduced their mortality rates. Our rates put us way behind most other developed nations. For instance, we have twice the rate of Saudi Arabia and three times that of the United Kingdom.

"Reproductive Injustice" names various factors as contributing to the problem. There's poverty: Citing a 2010 Amnesty International report, it says that high-poverty states had maternal mortality rates that were 77 percent higher than states with a higher percentage of people living above the poverty line.

According to "Reproductive Injustice," women of color are much more likely than white women to live in poverty and lack health insurance-barriers to health care that can lead to diabetes and heart disease, chronic health conditions that put women at greater risk for dying in childbirth.

Focus groups conducted by Sistersong document racial discrimination experienced by black women in health care settings. The women in these groups described the ways in which negative stereotypes about black women impacted how their health providers treated them, what information they were offered, and even the likelihood of being questioned about drug use during pregnancy. One woman from Jackson, Mississippi, shared that her doctor had assumed she wouldn't be able to use birth control effectively: "After I had the baby, and I went back for my checkup.[the doctor] told me, `I'll see you in six weeks.' I said, `Why?' He said I'd be pregnant again." Others described prenatal and labor experiences where they didn't feel their providers adequately informed them of their options. Another woman from Jackson had this to say: "We really don't have a lot of good experiences when it comes to having childbirth, especially because we're poor.Why are all these women having caesareans? Was it really necessary for me?.You have more black women having caesareans. Now I'm questioning."

Recent policy developments, primarily the Affordable Care Act's Medicaid expansion, have the potential to improve access to health care for women who aren't eligible for Medicaid under current requirements. But 19 states, including most in the South where maternal mortality rates are higher, have opted out of Medicaid expansion. Georgia, for example, has 838,000 uninsured women, more than 25 percent of whom are black, according to SPARK Reproductive Justice Now.

With the Latina immigrant women in "Reproductive Injustice," the major issue was denial of health care based on immigration status, which the report deems a form of discrimination. Recent Texas policies have eliminated funding for women's reproductive health care that many could receive regardless of immigration status or a lack of insurance. The report states that "immigrant women of reproductive age are approximately 70 percent more likely than their U.S-born peers to lack health insurance."

Even documented immigrants are barred from accessing health care benefits. Federal policy imposes a five-year waiting period for documented immigrants before they can be eligible for Medicaid. Texas goes a step further and refuses to extend Medicaid coverage to legal immigrants even after five years. Recent cuts to family planning funding in Texas have had a significant impact on immigrant women who live there. For example, in the Rio Grande Valley, the Southernmost part of Texas along the U.S.-Mexico border, the funding cuts and resulting closure of clinics has resulted in a 72 percent decrease in women receiving services, according to "Reproductive Injustice."

The report points out that the last time the ICERD committee evaluated the United States, it "recommended that the U.S. not only revise policies that inhibit low-income women's access to health insurance, but also to take steps to increase access to reproductive health services, education and information."

Making the case that the U.S. is violating its commitments to human rights conventions such as ICERD is one mechanism for trying to create accountability among policymakers, says Monica Raye Simpson, executive director of Sistersong. "I had the opportunity to go to Geneva and read the statement from the health disparities and reproductive justice working group," she says. "These world leaders do really hold the U.S. government accountable. It's important to the U.S. to have a good report card. Being there in the room and seeing that helped me to understand how much of a difference that makes."

Both Simpson, and Jessica González-Rojas, executive director of the National Latina Institute for Reproductive Health, say that being involved at the United Nations level allow their constituents to have more leverage when lobbying their state representatives.Activists with the organization have been using "Reproductive Injustice" in their legislative visits to the Texas state capitol, and the women whose stories were included in the report have been acting as spokespersons, says González-Rojas."We believe the women most impacted [by these disparities] are the best agents of change," says González-Rojas. "This [report] is a tool that allows them to bring their voices to the Capitol to fight for change."

In today's political climate, where, to quote González-Rojas, "politicians are playing politics with women's health," it can be difficult to see the path forward to improving health outcomes for women of color. The good news is that as the situation worsens, the level of attention placed on the problem increases. "Reproductive Injustice" concludes with a series of recommendations for actions to be taken by the U.S. government to address the situation, including increasing access to health insurance for low-income women (regardless of immigration status), improving monitoring and accountability mechanisms for maternal mortality rates and addressing race and gender stigma in health care.

[Miriam Zoila Pérez is a Cuban-American writer covering issues of race, health and gender. She is the founder of RadicalDoula.com, and was an Editor at Feministing.com for four years, during which time the site was awarded the Sidney J Hillman Prize for Blog Journalism. Her writing has appeared in The Nation, Alternet, The American Prospect, MORE Magazine, RH Reality Check and a number of anthologies, including "Yes Means Yes," "Click" and "Persistence." Pérez is the author of "The Radical Doula Guide: A Political Primer for Full-Spectrum Pregnancy and Childbirth Support." Learn more about her work on her website, or follow her on twitter @miriamzperez. ]