Dispatches from the Culture Wars – Gettin’ Out of Dodge Edition 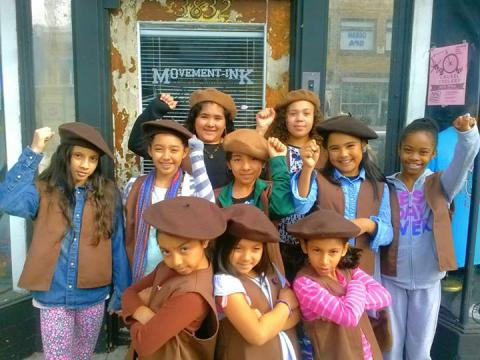 Not all girl scouts are concerned with peddling shortbread cookies. There’s one troop of young girls in Oakland that discusses matters of racial inequality and wear brown berets in an homage to radical civil rights groups.
The girls, ages 8-12, are part of the “Radical Brownies,” an edgier, younger version of the Girl Scouts, where girls earn badges for completing workshops on social protests, and a beauty workshop that celebrate racial diversity.
Radical Brownies is dedicated to providing young girls of color relevant life experiences, explains the group’s co-founder Anayvette Martinez.

With growing inequality and the civil unrest from Ferguson and the Occupy protests fresh in people’s mind, the world’s super rich are already preparing for the consequences. At a packed session in Davos, former hedge fund director Robert Johnson revealed that worried hedge fund managers were already planning their escapes. “I know hedge fund managers all over the world who are buying airstrips and farms in places like New Zealand because they think they need a getaway,” he said.
Global warming and social media are among the trends the 600 super-smart World Economic Forum staffers told its members to watch out for long before they became ubiquitous. This year, income inequality is fast moving up the Davos agenda – a sure sign of it is poised to burst into the public consciousness.

The Growing Ties Between #BlackLivesMatter and Palestine
By Alex Kane
January 26, 2015
Mondoweiss

After Black teen Trayvon Martin’s 2012 death at the hands of George Zimmerman in Florida, a newly formed group called the Dream Defenders sprung into action. They marched for miles. They occupied the state capitol in Tallahassee. They pushed for legislative measures that would address racial inequality.
And at the start of 2015, members of Dream Defenders, along with other groups focused on racial injustice like the Black Youth Project, went on a delegation to Palestine organized by the Institute for Middle East Understanding. The trip was meant to expose Black activists to the Israeli occupation. After returning, the participants have drawn parallels between the Black and Latino experience in the U.S. and the Palestinian experience.

Stonemill Bakehouse, a Toronto-based bakery, is selling “milder,” “light-textured” hemp and quinoa bread stuffed with vitamin D and calcium and packaged in a pink-accented bag for women. A matching “hearty” barley and rye version with protein and fibre is targeted at men.
The products signal an emerging trend of gearing food toward specific genders, say experts, who have noticed everything from chocolate to protein bars being made and marketed for men or women. This has prompted criticism on social media, with questions raised about the morals and motivation behind gender-based foods, even the need for them.

The Story of My Abortion
By Mae Ryan and Ana Athayde
January 22, 2015
Guardian

Forty two years after the US supreme court handed down its landmark decision in Roe v Wade, the right to an abortion remains a lightning rod for controversy in national politics.
Across the US, protesters are still picketing clinics and state legislatures are working to reign in the bounds of Roe more diligently than ever. Women’s rights activists have rallied, leading vocal rebuttals and filing court challenges of their own. But for all the political clamour surrounding abortion rights, we too rarely hear from the millions of women who have made the decision to end their pregnancy.
At the current rate, one in three American women will have an abortion by age 45. These are some of their stories.

The Penis Comes Out on the Parisian Catwalk
By Tim Teeman
January 22, 2015
The Daily Beast

It’s one of the most oft-quoted nightmares: You’re walking down the street, only to suddenly realize you’re naked.
Now the dream is a pricey reality if you buy certain pieces from the Rick Owens fall/winter collection—tunic-y outfits that recall a Roman emperor or maybe a hipster monk, until you get down to the nether regions where, on a few of the outfits, the material disappears or bunches up and there it is: dick on display.
A collective “ewww, put it away” rang out after the images surfaced online from the Parisian catwalks, where the fall/winter collections are being showcased.
There the dicks are, looking like little woodland creatures peeping out of the undergrowth. Very wrong.