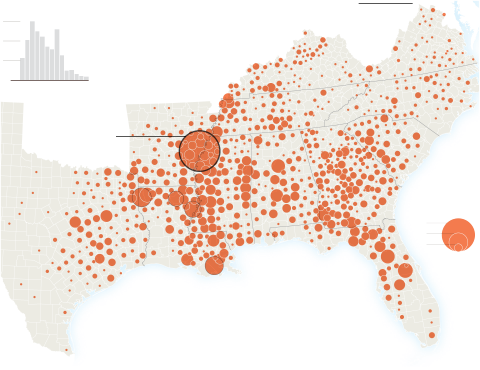 Black history gets its share of attention each February, but the places where people can go year-round to come face to face with the excruciating truth about slavery and to learn about the milestones of the civil rights movement often find it difficult to survive.
Museums of black history sometimes struggle because the story they tell is too painful for many people to want to bring to light, says the Rev. Jesse Jackson.
The solution, he says, is to convince mainstream America that black history should not be "hyphenated or marginalized," and encourage investment in museums that shed light on that history. "The African-American story is the American story," he says.

New Report Compiles A Devastating Count of Nearly 4,000 Lynchings of Black People in the US, Showing This Form of White Terrorism Had Profound Impact on American History
By Nick Chiles
February 10, 2015
Atlanta Black Star

There were 3,959 Black people lynched in the United States between 1877 and 1950—a number that is 700 more than previously known—and Georgia, Mississippi and Louisiana had more lynchings than any other state in the country. These revelations are contained in an astounding new report by the Alabama-based Equal Justice Initiative that attempts to place this horrid form of American racial terrorism in its proper historical context as a tool of white supremacy that had a profound impact on the nation.

The most recent data on lynching, compiled by the Equal Justice Initiative, shows premeditated murders carried out by at least three people from 1877 to 1950 in 12 Southern states. The killers claimed to be enforcing some form of social justice. The alleged offenses that prompted the lynchings included political activism and testifying in court.

Alongside the big narrative of the Holocaust there are a myriad of small, individual stories and testimonies that help illustrate and shed light on the cruelty and barbarity of the Nazi regime.
One such account is the story of what happened to Germany’s tiny black population.

The Disgrace of Our Criminal Justice
By David Cole
December 4, 2014
New York Review of Books

Bryan Stevenson’s Just Mercy tells the story of an innocent black man from the real Monroeville, Alabama, wrongly accused and convicted of a violent crime against a young white woman, although in this case the crime is murder, and this time the story is nonfiction. Stevenson’s account of the trial and appeals of Walter McMillian takes place in the 1980s and 1990s, not the 1930s. But some things apparently do not change.
Just Mercy is every bit as moving as To Kill a Mockingbird, and in some ways more so. Although it reads like a novel, it’s a true story and, in that sense, is infinitely more troubling. It’s set not in the distant Jim Crow South, a time when we now acknowledge these kinds of injustices were legion, but in the new South, which claims to have moved on.

Lucy Parsons is one of the least known of the major figures in the history of revolutionary socialism in the U.S. Much like her long-time comrades and friends, Eugene Debs, William “Big Bill” Haywood, and Elizabeth Gurley Flynn, Lucy Parsons made a tremendous contribution to the birth of America’s turn-of-the-century, revolutionary working-class movement; a movement which continues to this day to shape the character of class struggle and revolutionary politics in this country.
Historian Robin Kelley argues that Lucy Parsons was not only “the most prominent black woman radical of the late nineteenth century,” but was also “one of the brightest lights in the history of revolutionary socialism.” Historian John McClendon writes that she is notable for being the “first black activist to associate with the revolutionary left in America.”