How Is "Right to Work" Being Enforced?

Wisconsin has joined a host of other states whose right-to-work laws emulate "model legislation" produced by the American Legislative Exchange Council (ALEC). The Center for Media and Democracy (CMD) describes ALEC as a "bill mill" supported by several conservative foundations and dozens of high-profile corporations, like Koch Industries and ExxonMobil. So-called 'Right-to-Work" favors corporations at workers' expense.

April 2, 2015 Kathy Wilkes The Progressive
Printer friendly
How Is "Right to Work" Being Enforced? Published April 2, 2015 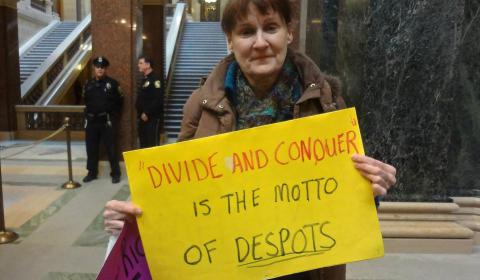 The contractor was hopping mad when he called into a radio talk show about Wisconsin's new "right to work"  law. He'd had a long and beneficial partnership with building trades unions and was angry about government interference in that relationship. He remained anonymous throughout the call-a good idea, considering what he said next: "I'm going to defy the law."

If he does, it could come at a heavy price. The law is emphatic: "Anyone who violates s. 111.04 (3) (a) is guilty of a Class A misdemeanor." That means a single violation of the ban against conditioning employment on a worker's decision to affiliate with or pay dues to a union-or not-can result in a $10,000 fine, nine months in jail, or both.

What is unclear is how any aspect of the law will be enforced. Will employers have to sign periodic declarations of compliance, for example? Will unions be required to submit collective bargaining agreements to a state agency for review?

"We've certainly given some thought to this," said Communications Director Myranda Tanck, speaking for State Senate Majority Leader Scott Fitzgerald, who introduced the bill. Beyond criminal charges, there are few specifics. A violation, she said, "would fall under the purview of the local district attorneys, because it's a misdemeanor."

Tanck said the Wisconsin law was modeled after similar laws in Indiana and Michigan. While noting that other states "have had some problems with enforcement," she added, "I don't think we anticipated any major issues with this." The experience of other states can help "model the Wisconsin approach."

Wisconsin has joined a host of other states whose right-to-work laws emulate "model legislation" produced by the American Legislative Exchange Council (ALEC). The Center for Media and Democracy (CMD) describes ALEC as a "bill mill" supported by several conservative foundations and dozens of high-profile corporations, like Koch Industries and ExxonMobil. The center recently published a side-by-side comparison showing that the text of the Wisconsin bill was taken "word for word" from ALEC.

Calls to district attorneys' offices in Madison and Milwaukee about their added responsibilities under the new law took some staffers by surprise. Milwaukee staff could only suggest that people seeking help call the DA or the state attorney general. Madison staff initially thought that a violation of the law would be a civil matter rather than criminal.

"There's been no coordination with us about right to work," DA Ismael Ozanne said, but that's not unusual. "If the legislature makes a penalty, they may or may not communicate with us about it." Any complaint of a criminal offense would have to be made to and investigated by local police, and, if there's merit, "they would refer it to the DA.," he said.

There is no information about the additional financial burden enforcement would place on communities and taxpayers.

"I haven't heard anything about extra funding," Ozanne said. "We've had a number of requests for extra prosecutorial positions for years. We're just a tick above 1985 staffing levels, and Dane County has grown 47 percent since then. I'm not sure how long it will take law enforcement to figure out how to investigate those violations."

The National Right to Work Legal Defense Foundation, however, isn't leaving much to chance. The day after Governor Scott Walker signed the bill into law, the foundation announced "free legal aid to Wisconsin private-sector workers [who want] to refrain from union membership and union dues payments."

Although the right-to-work law also protects pro-union workers against employers, the foundation is focused only on going after unions. "Eighteen right-to-work states have criminal penalties," said foundation spokesman Anthony Reidel.  "We do anticipate that union officials will resist the new law. We are prepared to help."

Pressed on exactly how that help would extend to advancing criminal complaints, three staffers passed on the question. Reidel promised a call-back that hasn't come as of this writing.

The National Right to Work Legal Defense Foundation is the legal arm of the National Right to Work Committee, an anti-union group that the Center for Media and Democracy says spent $33 million between 1999 and 2013 on lobbying. With ties to ALEC, the Koch brothers' Americans for Prosperity and other conservative organizations, the committee and its affiliates raked in $25 million in 2012 alone. Its high-gear operation helped usher in Indiana's right-to-work law, which also compels a Class A misdemeanor for certain violations.

Like Wisconsin's angry call-in contractor, unions too may be vulnerable to right-to-work criminal complaints, especially when union hiring halls dispatch workers to fill jobs for employers under the contract.

Branson doesn't believe that the criminal penalty under right to work  "would change anything much" in the way unions dispatch workers. The unions, he said, have legal counsel and will be meeting about these and other matters pertaining to the new law.

"So much has happened over the last couple of weeks," he said. "We have to sort it all out."

Despite the confusion, one thing is certain: Even though the new law ostensibly protects workers who want to support unions as well as those who don't, the momentum and money behind right to work clearly favor the latter.

[Kathy Wilkes is a longtime, award-winning labor writer and editor and a contributor to NBC Newsvine.]

Many thanks to the author for sending this to Portside.