The Euro-Summit `Agreement' on Greece - Annotated by Yanis Varoufakis

The Euro Summit statement (or Terms of Greece's Surrender - as it will go down in history) follows, annotated by yours truly. The original text is untouched with my notes confined to square brackets (and in red). Read and weep. 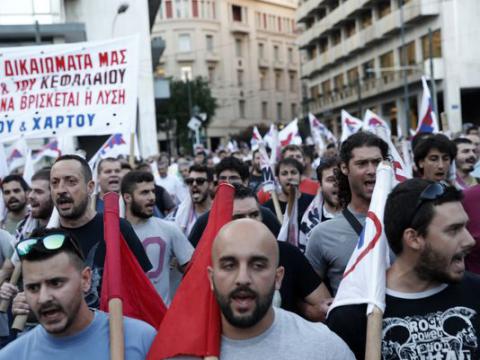 The Euro Summit stresses the crucial need to rebuild trust with the Greek authorities [i.e. the Greek government must introduce new stringent austerity directed at the weakest Greeks that have already suffered grossly] as a pre- requisite for a possible future agreement on a new ESM programme [i.e. for a new extend-and-pretend loan].

In this context, the ownership by the Greek authorities is key [i.e. the Syriza government must sign a declaration of having defected to the troika's `logic'], and successful implementation should follow policy commitments.

A euro area Member State requesting financial assistance from the ESM is expected to address, wherever possible, a similar request to the IMF This is a precondition for the Eurogroup to agree on a new ESM programme. Therefore Greece will request continued IMF support (monitoring and financing) from March 2016 [i.e. Berlin continues to believe that the Commission cannot be trusted to `police' Europe's own `bailout' programs].

Given the need to rebuild trust with Greece, the Euro Summit welcomes the commitments of the Greek authorities to legislate without delay a first set of measures [i.e. Greece must subject itself to fiscal waterboarding, even before any financing is offered]. These measures, taken in full prior agreement with the Institutions, will include:

Immediately, and only subsequent to legal implementation of the first four above-mentioned measures as well as endorsement of all the commitments included in this document by the Greek Parliament, verified by the Institutions and the Eurogroup, may a decision to mandate the Institutions to negotiate a Memorandum of Understanding (MoU) be taken [i.e. The Syriza government must be humiliated to the extent that it is asked to impose harsh austerity upon itself as a first step towards requesting another toxic bailout loan, of the sort that Syriza became internationally famous for opposing.]

This decision would be taken subject to national procedures having been completed and if the preconditions of Article 13 of the ESM Treaty are met on the basis of the assessment referred to in Article 13.1. In order to form the basis for a successful conclusion of the MoU, the Greek offer of reform measures needs to be seriously strengthened to take into account the strongly deteriorated economic and fiscal position of the country during the last year [i.e. the Syriza government must accept the lie that it, and not the asphyxiation tactics of the creditors, caused the sharp economic deterioration of the past six months - the victim is being asked to take the blame by the on behalf of the villain.]

The Greek government needs to formally commit to strengthening their proposals [i.e. to make them more regressive and more inhuman] in a number of areas identified by the Institutions, with a satisfactory clear timetable for legislation and implementation, including structural benchmarks, milestones and quantitative benchmarks, to have clarity on the direction of policies over the medium-run. They notably need, in agreement with the Institutions, to:

On the basis of these reviews, labour market policies should be aligned with international and European best practices, and should not involve a return to past policy settings which are not compatible with the goals of promoting sustainable and inclusive growth [i.e. there should be no mechanisms that waged labour can use to extract better conditions from employers.]

The above-listed commitments are minimum requirements to start the negotiations with the Greek authorities. However, the Euro Summit made it clear that the start of negotiations does not preclude any final possible agreement on a new ESM programme, which will have to be based on a decision on the whole package (including financing needs, debt sustainability and possible bridge financing) [i.e. self-flagellate, impose further austerity upon an economy crushed by austerity, and then we shall see whether the Eurogroup will grave you with another toxic, unsustainable loans.]

The Euro Summit takes note of the possible programme financing needs of between EUR 82 and 86bn, as assessed by the Institutions [i.e. the Eurogroup conjured up a huge number, well above what is necessary, in order to signal the debt restructuring is out and that debt bondage ad infinitum is the name of the game.] It invites the Institutions to explore possibilities to reduce the financing envelope, through an alternative fiscal path or higher privatisation proceeds [i.e. And, yes, it may possible that pigs will fly.] Restoring market access, which is an objective of any financial assistance programme, lowers the need to draw on the total financing envelope [i.e. which is something the creditors will do their utmost to avoid, e.g. by ensuring that Greece will only enter the ECB's quantitative easing program in 2018, once quantitative easing is. over.]

The Euro Summit takes note of the urgent financing needs of Greece which underline the need for very swift progress in reaching a decision on a new MoU: these are estimated to amount to EUR 7bn by 20 July and an additional EUR 5bn by mid August [i.e. Extend and Pretend gets another spin.] The Euro Summit acknowledges the importance of ensuring that the Greek sovereign can clear its arrears to the IMF and to the Bank of Greece and honour its debt obligations in the coming weeks to create conditions which allow for an orderly conclusion of the negotiations. The risks of not concluding swiftly the negotiations remain fully with Greece [i.e. Once more, demanding that the victim takes all the blame in behalf of the villain.] The Euro Summit invites the Eurogroup to discuss these issues as a matter of urgency.

Given the acute challenges of the Greek financial sector, the total envelope of a possible new ESM programme would have to include the establishment of a buffer of EUR 10 to 25bn for the banking sector in order to address potential bank recapitalisation needs and resolution costs, of which EUR 10bn would be made available immediately in a segregated account at the ESM [i.e. the Troika admits that the 2013-14 recapitalisation of the banks, which would only need a top up of at most 10 billion, was insufficient - but, of course, blames it on. the Syriza government.]

The Euro Summit is aware that a rapid decision on a new programme is a condition to allow banks to reopen, thus avoiding an increase in the total financing envelope [i.e. The Troika closed Greece's banks to force the Syriza government to capitulate and now cries out for their re-opening.] The ECB/SSM will conduct a comprehensive assessment after the summer. The overall buffer will cater for possible capital shortfalls following the comprehensive assessment after the legal framework is applied.

There are serious concerns regarding the sustainability of Greek debt [N.b. Really? Gosh!] This is due to the easing of policies during the last twelve months, which resulted in the recent deterioration in the domestic macroeconomic and financial environment [i.e. It is not the Extend and Pretend `bailout' loans of 2010 and 2012 that, in conjunction with GDP-sapping austerity, caused the debt to scale immense heights - it was the prospect, and reality, of a government that criticized the the Extend and Pretend `bailout' loans that. caused Debt's Unustainability!]

The Euro Summit recalls that the euro area Member States have, throughout the last few years, adopted a remarkable set of measures supporting Greece's debt sustainability, which have smoothed Greece's debt servicing path and reduced costs significantly [i.e. The 1st & 2nd `bailout' programs failed, the debt skyrocketing as it was always going to since the real purpose of the `bailout' programs was to transfer banking losses to Europe's taxpayers.] Against this background, in the context of a possible future ESM programme, and in line with the spirit of the Eurogroup statement of November 2012 [i.e. a promise of debt restructure to the previous Greek government was never kept by the creditors], the Eurogroup stands ready to consider, if necessary, possible additional measures (possible longer grace and payment periods) aiming at ensuring that gross financing needs remain at a sustainable level. These measures will be conditional upon full implementation of the measures to be agreed in a possible new programme and will be considered after the first positive completion of a review [i.e. Yet again, the Troika shall let the Greek government labour under un-payable debt and when, as a result, the program fails, poverty rises further and incomes collapse much more, then we may haircut some of the debt - as the Troika did in 2012.]

The Euro Summit stresses that nominal haircuts on the debt cannot be undertaken [N.b. The Syriza government has been suggesting, since January, a moderate debt restructure, with no haircuts, maximizing the expected net present value of Greece's repayments to creditors' - which was rejected by the Troika because their aim was, simply, to humiliate Syriza.] Greek authorities reiterate their unequivocal commitment to honour their financial obligations to all their creditors fully and in a timely manner [N.b. Which can only happen after a substantial debt restrucuture.] Provided that all the necessary conditions contained in this document are fulfilled, the Eurogroup and ESM Board of Governors may, in accordance with Article 13.2 of the ESM Treaty, mandate the Institutions to negotiate a new ESM programme, if the preconditions of Article 13 of the ESM Treaty are met on the basis of the assessment referred to in Article 13.1. To help support growth and job creation in Greece (in the next 3-5 years) [N.b. Having already destroyed growth and jobs for the past five years.] the Commission will work closely with the Greek authorities to mobilise up to EUR 35bn (under various EU programmes) to fund investment and economic activity, including in SMEs [i.e. Will use the same order of magnitude of structural funds, plus some fantasy money, as were available in 2010-2014.] As an exceptional measure and given the unique situation of Greece the Commission will propose to increase the level of pre-financing by EUR 1bn to give an immediate boost to investment to be dealt with by the EU co-legislators [i.e. Of the headline 35 billion, consider 1 billion as real money.] The Investment Plan for Europe will also provide funding opportunities for Greece [i.e. the same plan that most Eurozone ministers of finance refer to as a phantom program].

[Yanis Varoufakis is  Professor of Economics at the University of Athens; a member of the Greek Parliament, elected on the Syriza platform. Until the referendum of July 5 he was Greece's Finance Minister.]