Reader Comments: #BlackLivesMatter and Bernie Sanders; The Value of Protest; US Cited for Police Violence, Racism; Private Prisons; Euro Agreement and Greece; Urban Renewal and Public Space; Announcement: Rosa Luxemburg Conference - New Takes on a Longtime Classic - New York - August 21 - 22 (Moderator's Note - There will be no Tidbits for the next three weeks) 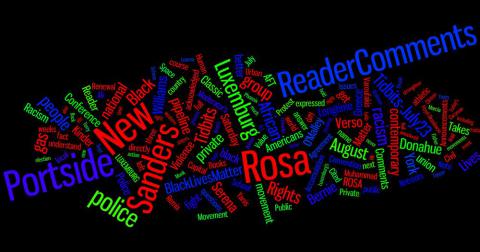 A Personal Reflection re: Black Lives Matter and Sanders at Netroots Convention

Thankfully, Oso was given the mic. She nailed O'Malley with questions on what he would do to protect black lives. When O'Malley went into typical politician mode delivering canned responses that didn't answer the question, the crowd booed and hissed. Despite repeated probing questions, O'Malley obfuscated and refused to directly address the fact of institutionalized racism and it's huge impact on African Americans. He was met with louder boos and hisses.

This kept up until Sanders came on stage.

The group did an action where individuals stepped up on a riser and shouted up at Sanders, each one yelling the name of African Americans killed by police.

This went on for what felt like 20 to 25 minutes; there were occasional shouts from the group of a desire to "Shut this F'r down."

I later learned that some in the audience yelled at the group to shut up.

While I didn't yell for anyone to be quiet, I am not particularly proud of some of my thinking at the time.

I cheered when the group came out and clapped enthusiastically, supporting the action. After a while though, I wondered why they wouldn't give Sanders a chance to answer the questions....I wondered if they really wanted a dialogue or whether their aim was to disrupt and shut down the event. I was conflicted because I wanted to hear Sanders - I do believe he's the best candidate. Instead of immediately recognizing the righteous anger and pain that was expressed, I failed these young people and I'm sorry I didn't get it right away. The experience left me - a 69-year-old African American woman - feeling old and out of touch.

Bernie didn't handle the situation well either. He was visibly irritated and instead of pivoting from his prepared remarks to directly answer the group's question, he started talking about the economy, the need for jobs, etc. He, too, was greeted with boos and shouts.

During his recent remarks in Houston that drew a crowd of 5,000, perhaps Sanders has gotten the message. A day after his performance at the Netroots convention, he forcefully talked against police brutality.

I just hope he will get whatever helps he needs to truly understand and identify with a better way to authentically respond to the issues surrounding the African American experience in this country as well as the Black Lives Matter movement. In Phoenix, for instance, he should have strongly acknowledged the anger and pain the group expressed. He should have talked about the institutionalized nature of America's racism against African Americans. He should have invited members of Black Lives to help him understand their plea. While sharing with everyone his core political and moral beliefs, he should have asked the people to join him in trying to make the country and the world a better place. Perhaps he could have simply told the truth: the centrality of the fight against subtle and overt racism is directly connected to the fight against all of the inequalities that keep our nation from living up to its expressed ideals.


Re: The Value of Protest

But Sanders is right. If we want to effectively attack racism at its roots and expose its structural foundation,  the first step is to demand full employment for all -not descend into more identity politics.

An excellent explanation of the importance of never abandoning the struggle...

I could not have said it better myself. I love Serena and Venus. Thank you sisters for being yourselves! Excellence and grace!

Another much neglected athletic powerhouse who was not only the Muhammad Ali of Beach Sports, namely Surfing, but also a contemporary of his (the 60's decade) was Geoffrey Michael Donahue, a nephew of Elinor Donahue. He excelled in surfing and retired UNDEFEATED. I believe that one of the reasons he never received the acclaim he deserved is because at the time surfing had not yet been acknowledged as an athletic endeavor but was considered a leisurely sport. As a matter of fact, Mr. Donahue was instrumental in getting Beach Sports acknowledged as athletic endeavors and subsequently admitted to the Olympic Games.

Re: US Cited for Police Violence, Racism in Scathing UN Review on Human Rights

What happened to that Post racial thing we were all living?

May 2015 - "... 117 countries criticized, shamed and attacked the U.S. for police violence and racial discrimination at the United Nations Human Rights Council hearing in Geneva...
Country after country recommended that the U.S. strengthen legislation and expand training to eliminate racism and excessive use of force by law enforcement ..."

Re: #BlackLivesMatter: The Birth of a New Civil Rights Movement

#BLMs "we started this" ... twitter feeds =/= the beginning of struggle.  the fight against police brutality was in full effect long before this sloganeering.  the contemporary resurgence began with the mass video witness to and militant rebellion against the murder of Oscar grant in Oakland, on the heels of Obama's election, resulting in the first California police officer to be charged with killing somebody in the line of duty since 1984.  the national movement for justice for trayvon martin was in full effect a year before #BLM was in the bar watching Zimmerman get acquitted.

Get rid of private prisons. Look for reform methods in the judicial system to reduce locking up our brothers and sisters. Cancel the DRUG WAR.

Re: The Euro-Summit `Agreement' on Greece - Annotated by Yanis Varoufakis

Thank you for this.  I'm withholding judgment on Tsipras but must say I'm confused and disappointed with his actions.  As an anti-Fascist Jew with a genetic distrust of Germans I fail to understand why Syriza would put a Referendum to the Greek people and then totally ignore their voice .  Am I missing something?

Re: Urban Renewal, Public Space, and the Growing Social Divide

Another insidious privatization strategy is the increased use of PPPs (private public partnerships) for construction/maintenance of city halls, courthouses, libraries, parks in which PUBLIC land/space is "leased" or sold to private developers (almost for free, of course) who then build "public" buildings/space, maintain such buildings/space (for a HUGE FEE), receive all the tax breaks/de-valuation credits et al and then when it all starts to crumble from age, sell it all back to the public at inflated/guaranteed profit.  All the while, private security makes sure people of color, poor people and homeless and workers don't litter this PPP landscape -- and sure as hell don't exercise free speech and rights to demonstrate.


Re: Teachers Say No Freaking Way to AFT Endorsement of Hillary Clinton

The AFT, my national union, is not going to eat crow and yield to the will of the masses. That's just how it is. And remember- the president, Randi Weingarten, was not a rise-through-the-ranks teacher/member of the union; she was the then-incumbent president's counsel, and a deal was brokered to enable her to "teach" a course in order to qualify as a member of the union and thus as eligible to hold union office. Wait- it gets better: Since the days of Al Shanker, the presidency is handed off to the hand-picked successor by having the incumbent resign and the Executive Board on either the national or local level "electing"/appointing the successor, who later runs for election as the incumbent. Feh!

Re: Residents Fight Back Against Pittsburgh's Privatized Water Authority

You might be interested in the battle going on in bucolic and poor western Massachusetts as residents come together to fight the Kinder Morgan pipeline. A few interesting facts. "Local gas company" Berkshire Gas puts on its bills that no new gas installation will be made until this Kinder Morgan pipeline is completed. Simple blackmail. This "local" gas company is not local after all but belongs to international Spanish Conglomerate Iberdola. They justify the need for this pipeline saying they require 1.9% locally. That much gas leaks from old infra structure that they don't repair.

This is a test case around energy policy, corporate greed, environmental destruction and citizen resistance. This fracked gas will go the Spain and will be sold on world markets at 3 to 5 times higher price than we presently pay. The pipeline from Marcellus is due to be completed in 2018 and that gas field begins to run dry in 2019. It goes on but last fact of the night is Kinder was formerly of Enron and is reputed to be the wealthiest man in Houston. The stakes showing the path of the pipeline have white cloth tied to them imprinted with the outline of Texas. Kinder called western Mass "North Korea"

This is an important national story and I hope it interests you. 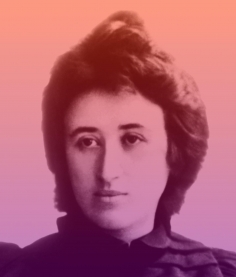 One hundred years after the publication of her masterpiece "The Accumulation of Capital," Rosa Luxemburg's ideas have come back in a big way across a wide swath of the contemporary left. If she were here today, what would Rosa say about contemporary feminist movements, the mass strike and Occupy, or our deepening ecological crisis? Join us at Verso Books on Friday night, August 21, and then at The New School during the day on Saturday to learn and discuss.

The Rosa Luxemburg Stiftung-New York Office, in collaboration with Verso Books and The New School, presents: Rosa Remix: New Takes on a Longtime Classic. The event will begin on Friday, August 21 at 6:00pm at the Verso Books office in Downtown Brooklyn, where we will celebrate 100 years of "The Accumulation of Capital" with fresh analysis from Rick Wolff, Patrick Bond, and Raphaele Chappe, followed by a reception with drinks and light snacks. A new translation of the Complete Works of Rosa Luxemburg: Volume II, which contains The Accumulation of Capital, published by Verso with support from RLS-NYC, will be available for sale.

On Saturday we will move to The New School's Wollman Hall, where, from 10:00am until 5:00pm, we will hold a series of panels on issues that explore the relevance of Rosa's works to issues ranging from climate change to war, spontaneity and contemporary social movements, and today's women's movement. We will also get a sneak peek at "Red Rosa," a forthcoming graphic biography presented by editor Paul Buhle and artist Kate Evans. Amongst the many questions that will be asked over the course of the day, our overarching theme will be whether fresh interpretations of Rosa Luxemburg's work can help to strengthen the shared struggles of the international left in today's world.

RSVP for Friday and Saturday here.

* "THE ACCUMULATION OF CAPITAL": 100 YEARS LATER

* SOCIALISM OR BARBARISM? WAR, CLIMATE CHANGE, AND THE FUTURE OF THE PLANET
* FROM MASS STRIKE TO OCCUPY: THE ELEMENT OF SPONTANEITY
* RED ROSA: A GRAPHIC BIOGRAPHY OF ROSA LUXEMBURG (Verso, forthcoming)
* ROSA LUXEMBURG: A LEGACY FOR FEMINISTS?
* INSTEAD OF A CONCLUSION: PUBLISHING THE COMPLETE WORKS OF ROSA LUXEMBURG

Moderator's Note - There will be no Tidbits for the next three weeks.

Tidbits will resume on August 20