Why We Cannot Speak of Economic Injustice Alone, or, Why Race Matters

One can delude one's self into believing that race can be avoided; but at the most awkward moments, it rears its ugly head and tears movements apart. In fact, it is the #BlackLivesMatter movement that has elevated this question to a national discussion point. There is an important segment of the progressive movement who strongly believe that economic injustice and a narrowly defined version of class can and must serve as the unifying feature of a progressive movement. 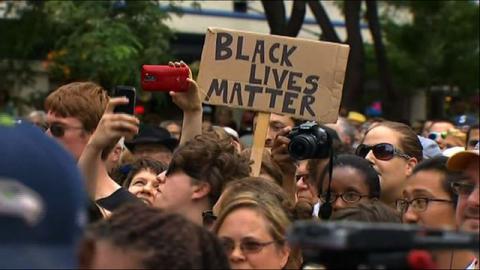 After a coalition rally celebrating the anniversary of Social Security was disrupted, Sanders later told a mass rally at the University of Washington "No president will fight harder to end institutional racism and reform criminal justice system,", AP Photo

The campaign of Bernie Sanders for President of the United States of America has surfaced as a critically important issue that has faced progressives in the USA since the 19th century: can the question of economic injustice stand alone as the platform for a progressive movement? In fact, it is the #BlackLivesMatter movement that has elevated this question to a national discussion point.

There is an important segment of the progressive movement (including but not limited to white progressives) who strongly believe that economic injustice and (a relatively narrowly defined version of) class can and must serve as the unifying feature of a progressive movement in the USA. They hold that other issues are a distraction or are, particularly in the case of race and gender, divisive. In order to address the question of divisiveness, we are instructed to believe that hammering away at matters of economic injustice (including inequality, unemployment, etc.), will bring us together.

The Sanders Campaign has ignited an immense amount of excitement and interest in very diverse segments of the progressive population of the USA. Although some people found this response surprising it needs to be understood as flowing from the combination of the 2011 Madison, Wisconsin demonstrations; Occupy Wall Street; and a dissatisfaction with the Obama presidency (and its failure to pursue a consistently progressive agenda). Sanders, along with Senator Elizabeth Warren, stepped into a relative political void and gave voice to an emerging populist sentiment.

The challenge is that populist sentiment in the USA has not been consistently progressive, and certainly not consistently progressive when it comes to matters of race. There are countless examples, not the least being the Populist movement (and Populist Party) of the late 19th century that courageously advanced anti-corporate, anti-rich politics, including calling for unity across racial boundaries, only to collapse when openly challenged by white supremacy.

The notion that so-called divisive issues are to be avoided in the name of an overarching and unifying economic theme ignores certain critical issues. These include, the nature of U.S. capitalism (and how it was constructed) and the fact that divisions already exist within the base of the populist sentiment and the progressive movement. This second point, i.e., the existing divisions, is so obvious that even mentioning it feels redundant, but the fact of the matter is that a recurring theme in progressive circles is the suggestion that the mass of the oppressed and dispossessed are "objectively" united and that there are these add-ons, e.g., race, that divide us.

In the case of the United States, the emergence of the settler society in the thirteen British colonies and the later development of the United States would not have been possible in the absence of the slave trade, genocide against the Native Americans, and the construction of a relative differential in treatment within the working population between those identified as white and those identified as non-white. This relative differential in treatment was neither imaginary, a matter of ideology (alone) or insignificant. The racial divide was essential for the successful exploitation of the labor of African slaves, the near elimination of Native Americans, and the subordination of those in the working population who came to be known as "white."

There is simply no way of running away from race. It is almost like Einstein's view of the curved universe, i.e., that no matter where you start, you will inevitably return to the same point. In the US, no matter where one starts, one can delude one's self into believing that race can be avoided; but at the most awkward moments, it rears its ugly head and tears movements apart. That is, unless those movements, through courageous and enlightened leadership, has prepared the movement (or specific struggle) for the pending racial tsunami.

The suggestion that race can be resolved through an appeal to class and economic justice alone suggests that economic justice will equally resolve the racial differential. It is not simply a matter of ".a rising tide raises all boats". The reality is that all boats may rise, but who finds one's self in which portion of each boat? Or, to use the metaphor of the Titanic, who is in steerage and who is closer to the main deck?

When movements like #BlackLivesMatter and many in the immigrant rights movement point to this matter of racial injustice, they are not suggesting attention for a "special interest." Rather, they are pointing out that there can actually be no economic justice in the absence of racial justice. There can be no unity without a commitment to the fight for equality and justice. These struggles are interlinked.

The sort of "political revolution" that the Sanders Campaign proclaims has been a long time coming. Yet it will never arrive if there is not a full recognition that the class struggle overlaps that of racial justice. The ruling elites, for several centuries, have appreciated that race is the trip wire of U.S. politics and social movements. When will progressives arrive at the same conclusion?

[Bill Fletcher, Jr. is the host of The Global African on Telesur-English. He is a racial justice, labor and global justice activist and writer. Follow him on Twitter, Facebook and at www.billfletcherjr.com. ]

This content was originally published by teleSUR at the following address:  http://www.telesurtv.net/english/opinion/Why-We-Cannot-Speak-of-Economic-Injustice-Alone-20150817-0011.html.