History has shown that Guatemala’s elite will fight viciously to protect their wealth and privilege, regardless of the incalculable human costs of doing so. But its people have demonstrated remarkable resilience, courage and tenacity in their pursuit of justice and democracy. At this critical juncture, the U.S. should not send more money, nor should it insist on blind allegiance to elections that would stabilize the status quo when Guatemala needs profound change. 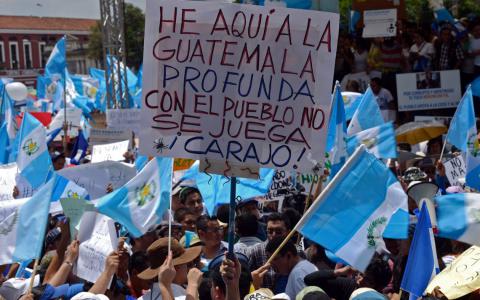 Months of protests have coalesced into unified outrage against Guatemalan President Otto Perez Molina after the nation’s top prosecutors disclosed evidence that he was embroiled in a graft scandal. A national strike on Aug. 27 has shuttered schools and businesses and brought tens of thousands to the street, with many on social media proclaiming, “I have no president.”

This is a fragile moment for a nation that has never reckoned with the bloody legacy of its internal conflict, from 1960 to 1996, which saw the deaths of more than 200,000 Guatemalans, mostly indigenous Mayans. Guatemala has yet to dismantle the inequality, poverty and racism that gave rise to that conflict. The U.S.-backed elites who used state-sponsored terrorism to crush the 36-year insurgency still wield power.

The ongoing crisis has struck a chord so deep that even Perez Molina’s former allies, including the Coordinating Committee of Agricultural, Commercial, Industrial and Financial Associations and the national Council of Bishops, have turned on him. Most of Perez Molina’s cabinet has resigned, prosecutors have called for his resignation and the Supreme Court has paved the way for his impeachment. But his departure remains uncertain. The congressional commission tasked with overseeing the impeachment process is stacked in the president’s favor, with only one of its five members hailing from the opposition.

However, whether he’s impeached or forced to resign before his term ends in January, the exit of Perez Molina and his cohorts will not allay the institutional dysfunction in Guatemala. The expansive scope of graft, which in May brought down Vice President Roxana Baldetti, will continue to undermine the country’s democracy and reinforce its dire poverty, inequality and social exclusion. Many Guatemalans have rejected another illicitly funded campaign and sullied election cycle and are demanding structural reforms, including changes to election and campaign finance laws.

Washington supports the peaceful protests but remains oblivious to the structural changes that many protesters are calling for, and is pushing for the Sept. 9 elections to go ahead — ostensibly, to maintain the country’s stability. But the old power architecture must be dislodged and rebuilt democratically in order for the Guatemalan people to realize their right to a more egalitarian and inclusive society.

Perez Molina’s involvement in the graft scandal was uncovered through the painstaking forensic work of the United Nations-backed International Commission against Impunity in Guatemala. It found that Guatemala’s main political parties derived nearly half of their budgets from corruption, split evenly among the business elites and organized crime, exacerbating other electoral frailties such as weak campaign finance laws and lack of an independent press. Investigators provided extensive evidence against Perez Molina that made deniability impossible even for his staunchest allies. Human rights advocates were instrumental in bringing the commission to the country despite resistance from powerful Guatemalan elites whose impunity was threatened by the commission’s mandate.

The U.S. should not insist on blind allegiance to elections that would stabilize the status quo when Guatemala needs structural reforms.

Perez Molina was implicated in the 2013 trial of former dictator Jose Efrain Rios Montt’s scorched earth campaign from 1982 to 1983. He was also a commander in the Nebaj region, where more than 1,700 indigenous Maya Ixil were killed. Rios Montt was convicted of genocide and crimes against humanity, and sentenced to 80 years in jail. But despite the harrowing testimony and overwhelming evidence, Rios Montt’s defense team and his supporters among the country’s elite made sure the verdict would not stick, and it was vacated 10 days later on a technicality.

Perez Molina denies that genocide occurred. His election in 2012 on an “iron fist” platform was a bitter pill for survivors of the genocide. A former military general, he also attended the U.S.-based School of Americas, which trained Latin American leaders in military and counterinsurgency techniques.

Rios Montt is scheduled to face retrial in January. But because the court found that he suffers from dementia, the proceedings will be held behind closed doors, Rios Montt will not be required to attend and he will not be sentenced even if he is found guilty again. The irregularities prompted several U.N. experts to urge Guatemala to “prevent any further attempt at interference, obstruction of justice or manipulation of the law.” But as the past bleeds into the present, justice remains elusive.

Meanwhile, President Barack Obama’s administration is pushing for a $1 billion aid package to Guatemala, Honduras and El Salvador to stem the flow of desperate refugees fleeing violence and poverty. The plan purports to advance good governance, security and economic development. But the recent turn of events in Guatemala vindicates Washington’s critics, who say the U.S. must support genuine change in Guatemala, not merely superficial safeguards, to ensure the aid benefits people who cannot afford “business as usual.”

Protesters are demanding reforms necessary to construct a political and economic system that represents all Guatemalans, not only the rich and powerful. But there are concerns that the president could instigate a coup to prompt his exile or his supporters could promote violence to further break down the institutional order.

History has shown that Guatemala’s elite will fight viciously to protect their wealth and privilege, regardless of the incalculable human costs of doing so. But its people have demonstrated remarkable resilience, courage and tenacity in their pursuit of justice and democracy. At this critical juncture, the U.S. should not send more money to a country whose political class has proven it cannot be entrusted with it, nor should it insist on blind allegiance to elections that would stabilize the status quo when Guatemala needs profound change. This time around, Washington should stand on the right side of history.

Lauren Carasik is a clinical professor of law and the director of the international human rights clinic at the Western New England University School of Law.