The current Israeli government is unlikely to permit advances in religious freedom such as civil marriage, equal funding of non-Orthodox institutions and reducing the power of the ultra-Orthodox Chief Rabbinate...an alternative to the rigid and insular Judaism that permeates Israeli public life must remind the Israeli state about the power and wisdom of a pluralistic approach to Jewish life, said Rabbi Rick Jacobs, of the Union for Reform Judaism. 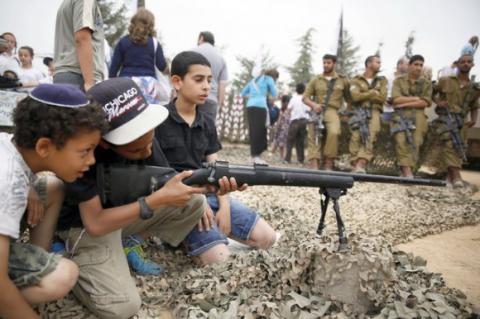 Photo of children celebrating Israeli independence in Efrat 2014 - part of the extreme militarization of all aspects of life in Israel today., Mondoweiss
Rabbi Rick Jacobs Tells Reform Jews To Fight Israel's 'Misguided Policies'
By Jewish Telegraph Agency (JTA)
November 6, 2015
Jewish Daily Forward
The leader of American Reform Jewry said Diaspora Jews should not support the misguided policies of Israeli leaders and that Israel should look to North America for moral guidance.
"Asking Jews around the world only to wave the flag of Israel and to support even the most misguided policies of its leaders drives a wedge between the Jewish soul and the Jewish state. It is beyond counterproductive," Rabbi Rick Jacobs, president of the Union for Reform Judaism, said in his keynote speech Thursday night to the union's biennial conference in Orlando.
"Jews who see brokenness in the treatment of Israel's minorities, or in the way ultra-Orthodox views of Judaism are being enshrined in secular law, are being told that, when it comes to Israel, you should check your commitment to tikkun olam at the door; we will not," Jacobs said.
Tikkun olam, the Hebrew term that means repairing the world, traditionally has meant doing good works that benefit the wider community. Jacobs said it also applies to repairing Israel.
"Our North American Reform Jewish community [can] be an enormous source of spiritual, moral, and strategic help to the Jewish state," he said.
"The current Israeli government is unlikely to permit advances in religious freedom such as civil marriage, equal funding of non-Orthodox institutions and reducing the power of the ultra-Orthodox Chief Rabbinate," Jacobs noted. "Our movement, with its alternative to the rigid and insular Judaism that permeates Israeli public life and its unbounded passion for tikkun olam as a living expression of Jewish life, must remind the Israeli state about the power and wisdom of a pluralistic approach to Jewish life." 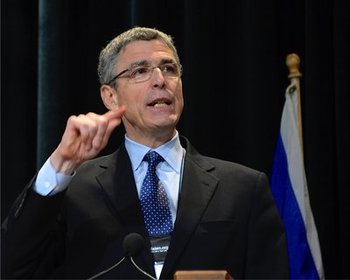 Rabbi Rick Jacobs, president of the Union for Reform Judaism
Image: Union for Reform Judaism
Much of Jacobs' speech was about refocusing the Reform movement on using tikkun olam as a gateway to Jewish life, and using Jewish ritual and study to reinforce the work of tikkun olam.
"For too many non-Orthodox Jews, tikkun olam is not grounded in deep study, spiritual practice or communal engagement," Jacobs said.
"Just as we cannot build and sustain our Jewish communities solely on ritual and study, neither can we build and sustain our Jewish identity solely on being good citizens of the world," he said. "Prayer, Shabbat, and festival observance help replenish the reserves of idealism."
Jacobs added, "Today, we Reform Jews are no longer allergic to everything in traditional Judaism. We can and should reinterpret what prayer, kashrut, and Shabbat are, how Jewish study and practice can be the underpinning to a life of tikkun olam. They can give us the balance and strength to labor daily to do justice in our time."
The Reform leader also criticized religious Jews for being scrupulous about certain Torah observances but ignoring the imperatives of social justice.
"Too often, traditional Judaism has ignored tikkun olam. Too often, yeshiva study and rigorous observance of ritual mitzvot do not lead to the prophet's call to `establish justice in the gate,'" Jacobs said, quoting the Book of Amos.
"Israel's ultra-Orthodox chief rabbis are zealous about making sure no chametz" - leavened bread - "is found in restaurants or stores on Pesach, and they are scrupulous about the Shabbat restrictions in Israeli hotels, but you will rarely hear them speak out about their government's inadequate housing policies, or the staggering gap between rich and poor, or the despair of Arab citizens of Israel," he said.
Jacobs, a former dancer, had ballet dancers performing alongside him onstage during one portion of his hourlong speech. Some 5,000 people are at the Reform biennial, which began Wednesday and runs through Sunday. Vice President Joe Biden will address the gathering on Saturday night.
Israel's Descent Into Jingoistic `Orgies of Feeling'
by Neve Gordon
November 4, 2015
The Nation 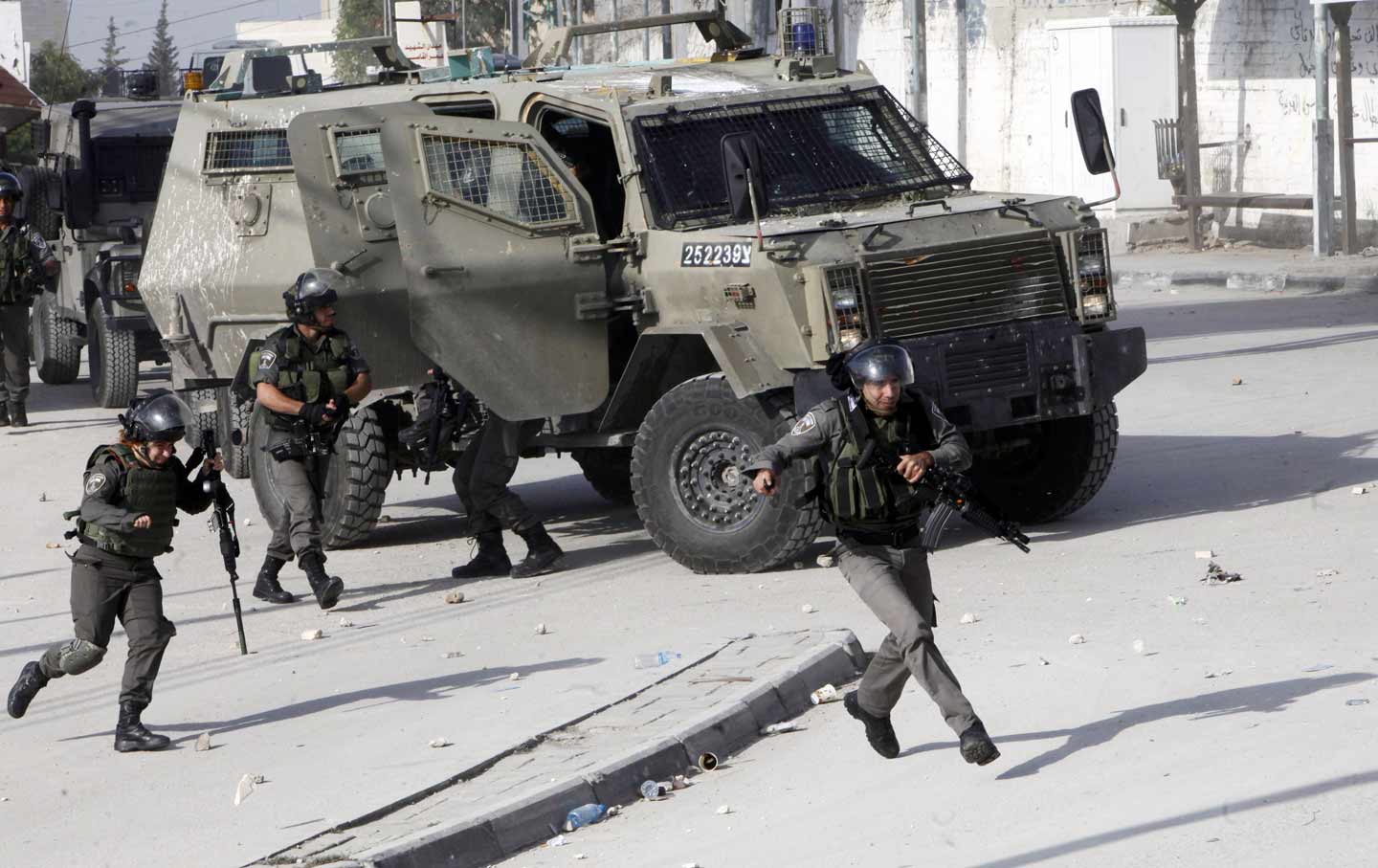 Israeli border police during a clash with Palestinian students in Abu Dis, West Bank, November 2, 2015.
AP Photo / Mahmoud Illean // The Nation
I first understood that something had changed when I received a message to one of my WhatsApp groups saying "Gordon's girlfriend." This was followed by the snuff video of police officers shooting Asraa Zidan Tawfik Abed, a 30-year-old Palestinian mother from Nazareth. In the video, Asraa is surrounded by Israeli soldiers who are all aiming automatic rifles at her while she sobs and cries out. She clearly poses no threat whatsoever to those around her, and yet suddenly a police officer nonchalantly walks toward her, aims, and shoots, three times. Asraa falls to the ground, while someone in the crowd shouts, "Daughter of a whore!"
The video went viral, and, like so many Jewish Israeli viewers, the person who sent it to my WhatsApp group obviously found the violence amusing. I watched the disturbing footage several times before answering, "This is what woman hunting looks like."
Two weeks later, an Israeli state prosecutor admitted that Asraa had had no intention of stabbing anyone, but he also added that the policeman who had gunned her down would not be charged. The message to the security forces was unequivocal: Shoot, no questions asked.
The snuff video of Fadi Alon from Jerusalem was even more horrific, and not only because Fadi was murdered by a police officer as he was trying to flee an angry mob, while Asraa was only wounded, but because the mob surrounding Fadi was caught on film taunting the police officers. They are heard demanding an extrajudicial execution while accusing the security forces of being spineless. Watching the police succumb to the mob, I understood for the first time what it must have meant to be in the Roman Colosseum in the midst of the madding crowd.
And, yet, the current situation in Israel is very different. Unlike ancient Rome, in Israel events are framed by a melodramatic political script that thrives on what Elisabeth Anker, following Nietzsche, calls orgies of feeling.
Indeed, the current popularity of snuff media in Israel is the product of a local melodrama industry that solicits intense pathos, which is aimed at encouraging heroic retribution against those considered responsible for so-called national injuries. Prime Minister Benjamin Netanyahu is the ultimate melodrama king, and he has, throughout his long political career, spun many tales that produce extreme feelings of fear and self-righteousness.
Netanyahu presents Israel as an always honorable actor and the perpetual victim of villainous actions. For him, goodness is always located in the suffering nation, evil in its antagonists, and heroism in sovereign acts of violence coded as valiant. Such melodramatic framing, as Anker explains in her excellent book, which focuses on post-9/11 politics in the United States, evokes intense visceral responses to supposedly terrible injustices imposed upon the state and its citizenry.
For example, Netanyahu's recent declaration that the mufti of Jerusalem was the one responsible for the Final Solution was aimed at creating a direct link between Palestinians and Nazis in order to produce and exacerbate intense feelings of pain and outrage among Israeli Jews. These emotions are then mobilized to produce the feeling that the state must forcefully punish the culprits. Finally, it also creates what Anker calls a felt legitimacy, the feeling among Jews that any response to the "Palestinian threat" is legitimate.
The fact that a few days ago Netanyahu retracted his original statement about the mufti is inconsequential. The script has already entered the public imaginary, and the environment that encourages violence and further repression has been ramped up yet another notch.
Unsurprisingly, many Palestinian citizens of Israel now refrain from speaking Arabic in public spaces. They have watched enough Israeli snuff films to know that the security forces as well as Jewish vigilantes are allowed to use lethal force with impunity. The melodramatic discourse and the orgies of feelings that Netanyahu and his political allies have managed to produce have been spectacularly successful. And while The New York Times' Isabel Kershner may claim that "the more mainstream Israeli right and left have gravitated over the last two decades toward a less ideological center, approaching some kind of consensus on the Palestinian issue," in reality a new level of acceptable retributive jingoism has been achieved.
[Neve Gordon is the author of Israel's Occupation (2008) and recently completed, with Nicola Perugini, The Human Right to Dominate (Oxford University Press).]