What Can Be Learned from Hillary Clinton's Slurs Against Reconstruction

Monday night, Hillary Clinton butchered Reconstruction's history. It's a good opportunity to correct the record, and glean why Lincoln really was America's greatest president. Reconstruction in reality was a briefly successful attempt to build a true democracy in the South. Clinton implies that it was Southern anger at unjust Reconstruction policy that led them to institute Jim Crow, but Jim Crow was the goal from the very end of the war. 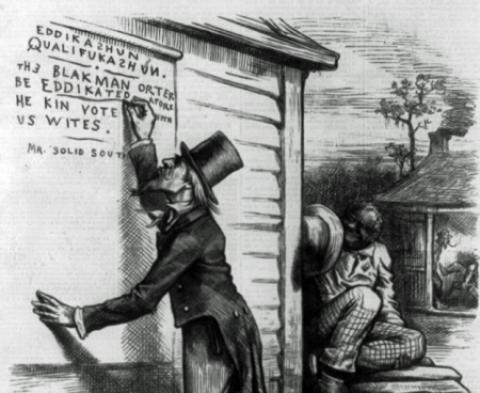 Reconstruction: Now You See It, Now You Don't - Grandfather clause: People who could not read and owned no property were allowed to vote if their fathers or grandfathers had voted before 1867. Practically no blacks could vote before 1867., Harper's Weekly, v. 23 (1879 Jan. 18), p. 52 // America's Black Holocaust Museum
On Easter Sunday in 1873, in Colfax, Louisiana, white terrorists murdered about 150 black Americans in cold blood.
The reason: simple political control. Democrats - then the party of white supremacist ex-Confederates - wanted control of the Colfax courthouse, which was the center of government for Grant Parish. Local politics in those days had largely decayed to a running guerrilla war between black Republicans and federal troops on one side, and white supremacist militias backing the Democrats on the other. So white Democrats overpowered the Republican garrison, forced them to surrender, then brutally murdered the black captives.
This was the single most violent episode of Reconstruction, according to historian Eric Foner. Yet when describing why Abraham Lincoln was her favorite president at a candidate forum Monday night, Hillary Clinton butchered Reconstruction's history. It's a good opportunity to correct the record, and glean why Lincoln really was America's greatest president.
Here's Clinton:
[Lincoln] was willing to reconcile and forgive. And I don't know what our country might have been like had he not been murdered, but I bet that it might have been a little less rancorous, a little more forgiving and tolerant, that might possibly have brought people back together more quickly. But instead, you know, we had Reconstruction, we had the re-instigation of segregation and Jim Crow. We had people in the South feeling totally discouraged and defiant. So, I really do believe he could have very well put us on a different path. [CNN]
There are two problems here. Most glaring is the tacit endorsement of the racist Dunning School view of Reconstruction as some bungled and unjustified imposition from the north, when in reality it was a briefly successful attempt to build a true democracy in the South. Clinton implies that it was Southern anger at unjust Reconstruction policy that led them to institute Jim Crow, but in reality the entire point of the terrorist violence that overthrew Reconstruction was to re-institute white supremacy by crushing black political power. Jim Crow was the goal from the very end of the war.
The second problem flows from the first. Lincoln's successor, Andrew Johnson, actually was extremely forgiving and tolerant towards the defeated Confederates. The result was to inflame violence. White Southerners were economically devastated and demoralized by losing the Civil War, and in early 1865 were largely resigned to whatever the North was going to impose. Later Reconstruction would get quite aggressive, but Johnson delayed things for many crucial months by vetoing everything Congress passed and pardoning tens of thousands of ex-Confederates. This gave the forces of white supremacy some crucial time to regroup and reorganize.

In other words, the problem with Reconstruction was not that it was too mean to the defeated slave-owning traitors of the Confederacy. The problem was that it was not mean enough - universal racial democracy should have been immediately and forcibly imposed, complete with a prolonged federal occupation of the South.

All this makes Clinton's explanation for why Lincoln was so great so much sentimental porridge. His entire presidency was consumed by the most violent war in the history of the Western Hemisphere - a war sparked by his election on a platform of halting the expansion of slavery. His true greatness lies in how he grew and changed during that war, deploying his peerless political mastery toward the preservation of the Union and the gradual extension of black rights.
At the beginning of his presidency, he still flirted with deporting black Americans to Africa; by the end he was a fervent defender of the rights of black soldiers. In response to pressure in 1864 to end the war by compromising on slavery, he leaned on the valor of black soldiers, 100,000 of whom were currently fighting in Union armies: "Why should they give their lives for us, with full notice of our purpose to betray them?. I should be damned in time & in eternity for so doing. The world shall know that I will keep my faith to friends & enemies, come what will." It was a speech in favor of voting rights for black veterans that inspired yet another Confederate terrorist to murder him.
In his book The Fiery Trial, Foner speculated about how Lincoln might have headed Jim Crow off at the pass. It's easy to imagine him gradually evolving towards where the Radical Republicans ended up by 1867: in favor of a true multi-racial democracy, imposed by federal troops where necessary. Instead of Johnson's vile racism making the government work at cross-purposes, Lincoln would have shepherded the project with his trademark skill from the start.
At any rate, such is naught but speculation. But what is certain is that Lincoln would have had to use government force to protect black freedmen, and that he was no stranger to such action. The lesson for Clinton, as she and Bernie Sanders compete for the black vote, is that sustained government force - imposed over the howling objections of many white elites - has historically been the only thing that advanced black rights in this country.
[Ryan Cooper is a national correspondent at TheWeek.com. His work has appeared in the Washington Monthly, The New Republic, and the Washington Post.]