All the news that's fit...well, it seems the NYT news story has been tailored to fit the editorial views of the paper. There are undoubtedly many left of center economists who have serious objections to the proposals Sanders has put forward, there are also many who have publicly indicated support for them. He has not given a fully worked out proposal for many of his ideas, nor is it reasonable to expect a fully worked out proposal from a candidate for the presidency. 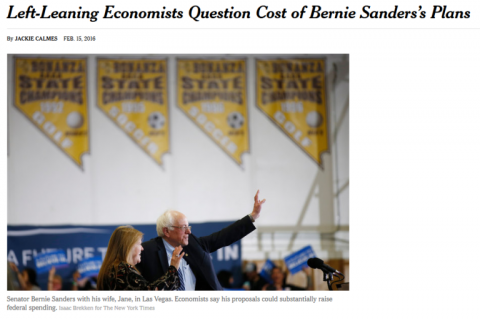 To be fair, as a New York Times reporter, Jackie Calmes probably doesn't meet many left-leaning economists, so she may not be sure what they look like.,photo: Isaac Brekken/NYT // FAIR
NYT Invents Left-Leaning Economists to Attack Bernie Sanders
By Dean Baker
February 16, 2016
Beat the Press - Center for Economic and Policy Research
A NYT piece headlined "left-leaning economists question cost of Bernie Sanders' plans" may have misled readers about the extent of skepticism among economists who consider themselves left-leaning. I can say this as a card-carrying left-leaning economist who often talks to other card-carrying left-leaning economists.
While there are undoubtedly many left of center economists who have serious objections to the proposals Sanders has put forward, there are also many who have publicly indicated support for them. Remarkably, none of those economists were referenced in this article. In fact, to make its case on left of center economists' views, the NYT even presented the comments of Ezra Klein, who is neither an economist nor a liberal, by his own identification.
It also misrepresented the comments of Jared Bernstein (a personal friend), implying that they were criticisms of Sanders' program. In fact his comments were addressed to the analysis of Sanders' proposals by Gerald Friedman, an economist at the University of Massachusetts who is not affiliated with the Sanders campaign.
It also presented the comments of Brookings economist Henry Aaron about the views expressed by "other economists in a `lefty chat group' he joins online." This would seem to violate the NYT's usual policy on anonymous sources.
Sanders has a very ambitious agenda covering everything from universal Medicare, reforming the financial sector, paid sick days and vacation, free college, and universal childcare. If an economist, left-leaning or otherwise, can't find some grounds for skepticism on any of these proposals they should probably be in a different line of work.
These are all big ideas, each of which will face enormous political opposition even if Bernie Sanders were in the White House. Sanders has not given a fully worked out proposal in any of these areas, nor is it reasonable to expect a fully worked out proposal from a candidate for the presidency. His campaign platform outlines general approaches. In the event Sanders got to the White House, it would be necessary to draft fully worked out legislative language which would almost certainly amount to hundreds of pages, and quite possibly thousands of pages, in each area. In addition, whatever he initially put on the table would have to be haggled over with Congress, even assuming that he had a much more sympathetic group than the current crew.
While it is nice that the NYT is subjecting Sanders' views to serious scrutiny, it would be good if it also subjected the views of other candidates to the same scrutiny. For example, Secretary Clinton has indicated a desire to give more opportunity to African Americans and Hispanics, yet she has not commented on the decision by the Federal Reserve Board to raise interest rates at the end of last year. This rate hike was intended to be the first of a sequence of rate hikes.
The purpose of raising interest rates is to slow the economy and the rate of job creation, ostensibly to prevent inflation. The people who will be disproportionately hurt by slower job growth and high unemployment are African American and Hispanic. NYT readers would likely be interested in knowing how Secretary Clinton can reconcile her commitment to helping African Americans and Hispanics with her apparent lack of concern over the Fed's decision to raise interest rates and deny them jobs.
Whatever standard of scrutiny the NYT chooses to apply to presidential candidates it should apply them equally. It is not good reporting to apply one standard to Senator Sanders, and even inventing credentials to press its points, and then apply lesser standards to the other candidates.
[Dean Baker co-founded CEPR in 1999. His areas of research include housing and macroeconomics, intellectual property, Social Security, Medicare and European labor markets. He is the author of several books, including Getting Back to Full Employment: A Better bargain for Working People, The End of Loser Liberalism: Making Markets Progressive, The United States Since 1980, Social Security: The Phony Crisis (with Mark Weisbrot), and The Conservative Nanny State: How the Wealthy Use the Government to Stay Rich and Get Richer. His blog, Beat the Press, provides commentary on economic reporting. He received his B.A. from Swarthmore College and his Ph.D. in Economics from the University of Michigan.]
NYT Rounds Up `Left-Leaning Economists' for a Unicorn Hunt
By Doug Henwood
February 17, 2016
FAIR - Fairness & Accuracy In Reporting
With Hillary Clinton ramping up her attacks on Bernie Sanders as a budget-buster-in the February 11 debate, she claimed  his proposals would increase the size of government by 40 percent-the New York Times (2/15/16) offered a well-timed intervention in support of her efforts: "Left-Leaning Economists Question Cost of Bernie Sanders' Plans."
While the "left-leaning" is no doubt meant to suggest critiques from those who would be inclined to sympathize with Sanders, all the quoted economists have ties to the Democratic establishment. So slight is their leftward lean that it would require very sensitive equipment to measure.
Opinion pieces critical of Sanders often begin with a pledge of allegiance to his "impracticality." This story, by Times reporter Jackie Calmes, is an "objective," newsy version of that:

With his expansive plans to increase the size and role of government, Senator Bernie Sanders has provoked a debate not only with his Democratic rival for president, Hillary Clinton, but also with liberal-leaning economists who share his goals but question his numbers and political realism.

Though Sanders wants to increase federal spending on infrastructure, college tuition and childcare, as well as other programs, the bulk of his proposed increase would be for establishing a single-payer healthcare system, and that's what Calmes' piece focuses on. It would replace the current mix of multiple forms of public insurance (Medicare, Medicaid, state and local programs) and private insurance with a unitary federal system, much like what Canada has. It would not nationalize doctors and hospitals, as in Britain; only the payment side would be socialized. Sanders refers to it as Medicare for All, which is a simplification, but close enough for politics.
The liberal-leaning economists that Calmes rounds up suggest that Clinton may have been too modest in her accusation that Sanders wants to jack up the size of government by 40 percent. No, Calmes warns that "the increase could exceed 50 percent, some experts suggest, based on an analysis by a respected health economist that Mr. Sanders' single-payer health plan could cost twice what the senator.asserts."
As if that wasn't scary enough, Calmes turns to mockery: "Alluding to one progressive analyst's criticism of the Sanders agenda as `puppies and rainbows,' Mr. Goolsbee said that after his and others' further study, `they've evolved into magic flying puppies with winning Lotto tickets tied to their collars.'"
The theme of magic was further developed in a piece by New York Times op-ed columnist Paul Krugman, "My Magic Unicorn" (2/16/16), in which the word "unicorn" appears six times (not counting the headline). Krugman's column, which denounces Sanders' proposals as hopelessly unrealistic, refers to Calmes' news story for support, a news story that itself reads like an op-ed in disguise. 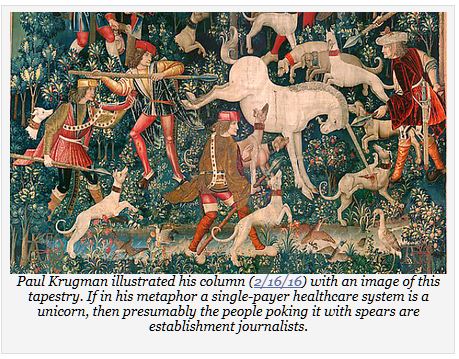