Why Progressives Need a National Electoral Strategy - and Fast

In the current cycle are two related but distinct problems. First, progressives have no national electoral strategy to speak of. Second, elections cannot be viewed simply or even mainly within the context of the pros and cons of specific candidates. Progressives are very divided about the relative importance of electoral politics, and our near exclusive focus on the candidates, that there is no coherent national progressive electoral strategy. 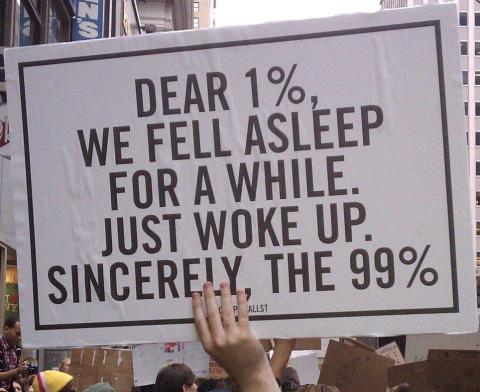 ., photo credit: Nation of Change
Every electoral cycle gives me the sense of "Groundhog Day" within progressive circles. It feels as if the same discussion take places over and again. No matter what has transpired in the intervening years; no matter what mass struggles; no matter what theoretical insights; progressives find themselves debating the relative importance of electoral politics and the pros and cons of specific candidates. These debates frequently become nothing short of slugfests as charges are thrown around of reformism, sell-outs and purism. And then, during the next cycle, we are back at it.
What has struck me in the current cycle are two related but distinct problems. First, progressives have no national electoral strategy to speak of. Second, elections cannot be viewed simply or even mainly within the context of the pros and cons of specific candidates. In fact, with regard to the latter, there are much bigger matters at stake that are frequently obscured by the candidates themselves.
Let's begin in reverse order. In a recent exchange on Facebook I had with a friend, he raised the point that Hillary Clinton holds some positions to the right of Donald Trump. His, apparent, point was that in a final election, should it come down to Clinton vs. Trump, it would actually not make much of a difference who won. Someone I do not know responded to my friend by pointing out that Hitler was to the "left" of certain candidates as well and that the issue of intolerance needed to be the point of focus.
Looking at the platform or views of a candidate reveals only part of the equation. It gives one a sense of the candidate. What is just as important are the social forces that have assembled around a particular candidate and the direction of their motion. Let's go back to Hitler for a moment. Within the NSDAP (Nazi Party) there were forces on the left and the right, of course these terms being quite relative. The Brownshirts, otherwise known as the SA (Stormtroopers) proselytized in favor of a "national revolution" in Germany. Hitler and his SA supporters advocated some very radical solutions to the problems facing Germany. They consciously utilized left-wing symbolism (such as a red flag as background to the swastika) in order to appeal to the working class and other disgruntled forces crushed by the economy. They did this while promoting antisemitism and militarism. On June 30, 1934, after assuming power and after cementing his alliance with the German military and major elements of the economic establishment, Hitler and the SS crushed the SA and any further discussion of a "national revolution." While the SA may have sincerely been interested in their perverted notion of a "national revolution," the Nazi movement had built a base and a set of alliances that was interested in something quite different: a radical restructuring of capitalism, the end of political democracy, and a relocation of Germany among the world's powers.

Right-wing populism, whether in its fascist or non-fascist form, can assume a posture and articulate a language that can appear left-wing. History has demonstrated this time and again. Yet right-wing populism is NOT "right-wing + populism" but is, instead, a specific integral phenomenon known as "right-wing populism." It is irrationalist, xenophobic, frequently anti-Semitic, racist and misogynistic. And it is a movement, rather than just a few crazed individuals.

Looking at Trump and his platform tells us something but not enough. An examination of his base and their objectives is just as important. The white revanchism that exists among his base, i.e., the politics of racial and imperial revenge, flows through and from the Trump campaign like waste through a sewer. The economic anger of the Trump base is something that is very real, but it is anger seen through a racial lens and articulated through coded racial language.
The Trump and Cruz forces, to broaden this discussion a bit, are not only intent on seizing the White House, but they also want to alter the entire political landscape. The work by the Right-wing at the local and state levels, in this regard, cannot be ignored. Efforts to promote the conditions for a Constitutional Convention have been underway for years by the right-wing, with a clear aim of overthrowing 20th century victories. This corresponds with, though is independent of, plans by candidates, such as Trump and Cruz, to eliminate various institutions, e.g., Department of Energy, Education, that are, at least in theory, to address broader popular needs.
For these reasons, the near exclusive focus on the individuals known as Trump and Cruz can be misleading. What is contained in their base? What does one make of the violence associated most especially with the Trump campaign? Neither of these campaigns, as idiotic as they may appear, are reality TV shows. These are spearheads of a social movement that is very deeply rooted in the settler colonialism and racism of U.S. society.
This brings us to the matter of the lack of a progressive electoral strategy. It is in large part because (a) progressives are very divided about the relative importance of electoral politics, and (b) because of our near exclusive focus on the candidates, that there is no coherent national progressive electoral strategy. This does not mean that people lack ideas. There are important forces out there ranging from the Working Families Party to the Progressive Democrats of America to more local formations such as New Virginia Majority and New Florida Majority that are articulating creative strategic approaches. Yet, this work is less than the sum of its parts (with no criticism implied of these groups). It is, however, the case that when most progressives think about electoral politics they think less about strategy and more about a particular candidacy or set of candidacies, more often than not candidacies that have not emerged out of the progressive movements.

A progressive electoral strategy begins with an assumption: that progressives are interested in not only conducting defensive battles, but actually winning power. This is a complicated assumption because there are many progressives who appear to not be particularly interested in winning power unless winning power means the death of capitalism, i.e., either capitalism dies or we sit back and criticize the system. Such views end up reinforcing cynicism but also pessimism about the ability to win any change. Constant defensive battles are demoralizing and disempowering.

Even for those of us who believe in system change and social transformation, there is a vital need for an interim approach, if only to address the dire needs of masses of people for basic survival (including matters relative to the environment). This need is a call for a fight for political power, and such a fight necessitates a strategy.
I frequently mention an experience I had in Texas about a year ago. I gave a talk about the political situation following which there were comments from the audience regarding the terrible political circumstances in Texas. I listened carefully and then asked the group: "How do we win power in Texas?" Well, the group was stunned. For many-I could tell-my question seemed to come out of nowhere and was over the top. Yet I went on to explain that progressives need to rethink the manner in which we approach our situation. Texas, for instance, is changing in many important respects, including demographically. Thus, the question I believe that we should be asking concerns the social movements in Texas, and which are key? I would also ask about the politics of different cities? Further, what alliances can and must be built? I would suggest that such questions need to be asked of every state in the USA.
A seriousness about winning power means, to borrow from Sun-Tzu, to know your enemy and know yourself. With respect to the fight for power, this means that we must understand the terrain in which we are operating; the nature of power in the USA; the nature of our enemies; the nature of both our tactical and strategic allies; and the growth and decline of various progressive social movements. Putting this together helps place progressives on a road towards winning rather than a road towards the glorious and heroic defeats with which too many of us are familiar.
[Bill Fletcher, Jr. is a Senior Scholar with the Institute for Policy Studies, on the editorial board of BlackCommentator.com, the immediate past president of TransAfrica Forum, and the author of "They're Bankrupting Us" - And Twenty Other Myths about Unions. Follow him at www.billfletcherjr.com ]
Subscribe to Portside