Verizon workers went on strike one week before a competitive New York state primary in which a socialist is running. You had a credible national candidate for president on a nationally-televised debate calling out the CEO of a big corporation. That just does not happen very often. Given the current climate, Hillary Clinton made a big point of coming to our picket line the first day of the strike, Bill went to a picket line in Buffalo. 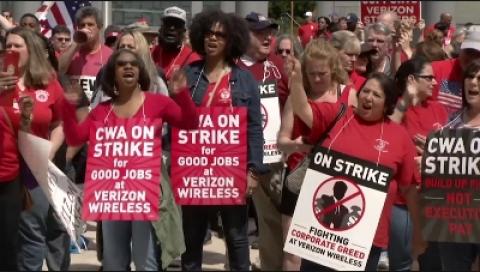 On Friday, May 27, the six-and-a-half-week Verizon strike came to an end with a tentative contract agreement.

The Communications Workers of America and International Brotherhood of Electrical Workers, the unions that represent the Verizon workers, hailed the contract as a victory, citing its creation of 1300 new call center jobs along the East Coast, first-ever contracts for Verizon wireless store employees in Brooklyn and Everett, Massachusetts, and raises of nearly 11 percent over the life of the contract. The workers beat back demands from the company to cut pensions, transfer workers out of state for up to two months, and proposed cuts in disability and accident benefits.

Robert Master is co-chair of the New York State Working Families Party and political director for District 1 of CWA. He sat down with The Progressive to talk about the role of technology in the strike, the changed political circumstances since the last time Verizon workers walked out, and what the contract gains mean for the future of labor. This is an excerpt from a longer interview that will be published in the July/August issue of the magazine.

Q: Give us a rundown on what you think the most significant wins in this contract are.

Robert Master: ﻿The most significant wins are the preservation of job security and good jobs. That was the central goal of the strike; I think we won a pretty sweeping victory on those issues. Also, the addition of 1300 call center jobs across the footprint—that we actually increased the percentage of call center work that's going to be handled by unionized workers in the mid-Atlantic and the northeast was big. We reversed a number of contracting-out initiatives among technicians, so there'll probably be 100 or 200 jobs there. And then protecting the pension, getting a good raise, minimizing the damage on healthcare and of course getting the first contract at Verizon Wireless, all of these things are very big wins.

Q: ﻿We first talked at the beginning of the sixth week of the Verizon strike. What was happening as the company came back to the table?

Master: The secretary of labor, Tom Perez, convened a mediation process. We know that sales were down very significantly in the wireless stores that we're picketing. Thanks to our visit to the Philippines, we know that the call center workers in the Philippines who were handling FIOS customer calls were authorized to give customers who are disgruntled between $15 and $50 a month off to keep them as customers.

People were really responding. It's hard to measure if it's more than or equal to what we saw [during the Verizon strike] in 2011, which was six weeks before Occupy. We felt a lot of that anger then, too. But this is a big company, the sixteenth-largest company in America. They've got a lot of money so it's no joke.

Q: CWA has been organizing Verizon wireless workers recently—I met a few of them on the picket lines, their first time joining the wireline technicians on strike. Talk about their role in this.

Master: We have represented about 100 wireless cell site technicians since 1989, but obviously our focus on that is even greater than it has been in the past. We tried to get local groups and local unions across the country to start adopting stores and be out in front of them. This is Verizon's big public face, this is where they're vulnerable to consumer pressure.

Q: There's this idea that workers in unions are opposed to technological advancement, that they're stubbornly trying to maintain old economy jobs. But in this strike it was the unions that called for Verizon to invest in its fiber optic technology.

Master: The company always says these wages and these benefits and these work rules are relics of the era of the princess phone. They're antiques and we have to get rid of them. The first thing we say is, our members are building the most advanced fiber optic internet network in America so we are not antiques.

Yes, we are serving, in New York state, almost three million people who are still dependent on copper lines. And those people deserve to have good phone service. Despite the fact that Verizon doesn't want to be considered a phone company they actually are a regulated phone company.

But also, when it comes to the wireless workers who are allegedly on the digital cutting edge, the company says “Oh no, we can't pay them, we can't share our giant mega profits with them. We're paying them the industry standard.” So, either we're antiques or on the cutting edge, but both times the executives and the shareholders are the only winners.

Telephone systems have always been automated and so telephone strikes always take a while to actually have an impact on consumers. Ironically, despite the fact that we're dealing with even more advanced technologies now the impact has hit harder, faster. Partly because they've under-invested in the network for fifteen years, partly because they're completely understaffed. Partly because they no longer hire most of their managers out of the rank and file. They hired them out of college and they have no skills and so they do things like make telephone poles fall on customers' houses and make telephone poles fall into street, and they cannot do FIOS installations. They're way behind. Customers are really mad.

We're not Luddites at all. We're all about building more FIOS instead of buying some failed internet brand like Yahoo for four or five billion dollars or whatever they're going to spend on that. Build FIOS in Buffalo. Create good jobs. Give folks in Buffalo the opportunity to take advantage of the best internet service in the country.

Q: It still comes back to the question of what the company's responsibility to the workers is.

Master: A perfect example—and one of the big fights—was that we had a provision of the contract that said X percent of call center work that originates in a particular state must be handled in that state. It means that your work is going to be handled by a person making about $69,000 a year who has health insurance and maybe a pension. As opposed to shipping it to the Philippines, where someone's making $1.75 an hour, being forced to work six days a week without getting overtime pay, and where women are tested monthly to see whether not they're pregnant because they don't want any pregnant women working in the location. These are the choices we have.

Q: Tell me about the trip to the Philippines and the connections you're making there.

Master: We sent a delegation, Tim Dubnau our organizing director and three strikers, and they picketed one of the call centers and then most dramatically they tried to have a meeting with Verizon management in the Philippines [and were chased down a public road by armed security].

There's like 4,000 or 5000 call center workers there. They're furious, they wanted to be supportive of what we are doing. I think the lesson that we took away from it is Verizon's greed knows no national boundaries. The truth is the limitations that we have on how this work is handled are the only things preventing these jobs from being turned into $1.75 an hour jobs. Which by the way Filipinos can't live on. It's been really fascinating and there's been a very strong response there to try to be helpful to us.

Q: After quite a long strike, against a company that was really hardline the last time around, what's the significance for the labor movement of staying out this long and coming back with a pretty good contract?

Master: By executing a pretty smart strike plan and staying on message in the media, we were able to inflict real damage on the company and protect the interests of members. In an era in which strikes have become so infrequent this really does demonstrate that workers can exercise the strike power in effective ways still.

Master: ﻿I was talking to the president of the union right after the New York primary and I said “We should remind ourselves never to call a strike again unless it's one week before a competitive New York state primary in which a socialist is running,” because it was amazing. You had a credible national candidate for president on a nationally-televised debate calling out the CEO of a big corporation. That just does not happen very often. Given the current climate, Hillary Clinton made a big point of coming to our picket line the first day of the strike, Bill Clinton went to a picket line in Buffalo. When we were in New Mexico the Hillary campaign put out a statement supporting our action at the shareholders' meeting. I was not surprised by the way our concerns intersected with broader concerns about corporate power, Wall Street power, but it was a pretty cool thing to have experienced.

Master: We knew that public sentiment would be on our side. America is against big corporations right now and that's a good healthy thing for our society. Nobody goes out and says "Oh no, Lowell [McAdam, Verizon CEO] really deserves $18 million a year," that's just not something you feel on the street.

[Sarah Jaffe is an independent journalist covering labor, economic justice, and social movements. She is the author of  Necessary Trouble: Americans in Revolt, to be published by Nation Books in August.]