12,000 Years Ago, Humans and Climate Change Made a Deadly Team

Researchers found that the combination of human encroachment with the warming contributed to the extinctions. 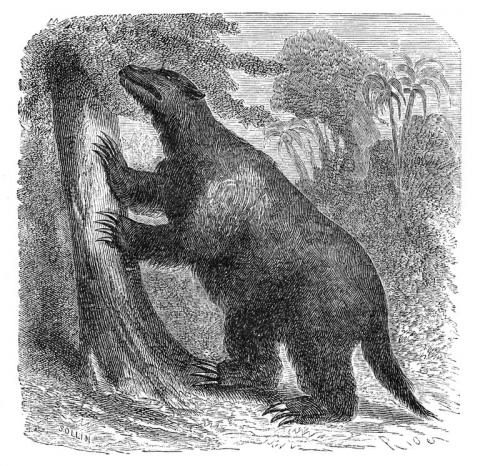 An illustration from the 19th century of a giant ground sloth, which was among the many megafaunal species that went extinct in Patagonia during a rapid warming phase that followed the Antarctic Cold Reversal., Science Source

Climate change, habitat destruction, extinctions — the Earth has seen it all before, thousands of years ago. And humans may have been partly to blame for many of those changes in nature, too.

A new study published Friday in Science Advances shows that the arrival of humans in Patagonia, combined with a changing climate, led to the extinction of many species of megafauna about 12,000 years ago in the southern portion of what is now South America. The research offers a significant moment in the natural history of the continent: a definitive date of the mass extinction of megafauna — large or giant animals, like mammoths and giant sloths — in this part of the world. It also suggests a potential relationship between threatened species and climate change in our own time.

The authors of the study from the University of Adelaide in Australia, with help from scientists from South America and elsewhere, found that the presence of humans in Patagonia was not enough to drive extinction, but the one-two punch of humans and a warmer climate led to the collapse of many species.

The scientists sequenced the mitochondrial DNA from 89 megafaunal bone and teeth samples that had been excavated from caves and rock shelters in Patagonia. They were able to date 71 of those samples, and then looked into whether the extinctions of those species were associated with other known events — ice ages or warming periods, for example — in the annals of either climate change or human existence.

Humans had been in Patagonia for at least 1,000 years before this mass extinction, and they overlapped with megafauna during a cold period known as the Antarctic Cold Reversal. After that climatic period, a rapid warming phase followed, and much of the ice that carpeted the region began to melt, allowing for a beech tree forest to creep across the land, reducing their original habitat.

According to this study, the extinction began soon after Patagonia began to heat up. Humans played an important role, too: Their presence put pressure on the animals, through hunting and a smaller habitat range, scattering the megafauna throughout the region.

And it all happened pretty quickly: The scientists found that the extinction of these big animals occurred within a relatively narrow time frame — about 300 years. Of the area’s large mammal species, 83 percent died out, including some that the scientists discovered in the course of their work. The researchers also identified a species of puma related to some cats still around today.

The scientists concluded that the extinctions of these Patagonian megafauna were initiated by an environmental change, but it became an ecosystemwide change because of mankind.

For Alan Cooper, one of the authors of the study, the results help put our modern climate change and extinction dilemmas into context.

Over the last 100 years, he said, the earth’s atmosphere has warmed enormously, largely because of the emissions of greenhouse gases from human activity. Some modern megafauna have become extinct or are now “in a great bit of trouble,” Dr. Cooper said, because of human action — deforestation or hunting — but warming may be a cause, too, directly and indirectly.

Periods of warming and the collapse of megafauna seem to happen at the same time over much of history, Dr. Cooper said.

He paused before asking, “What is it about warming that amplifies humans’ destructive instinct?”