U.S. generosity, which costs every American taxpayers $300 a year, is detrimental to Israel and will only push it toward more acts of aggression. Hundreds of Israeli intellectuals appeal to world Jewry: `End Occupation for Israel's Sake'. Signatories of letter include seven high-ranking IDF officers, 20 former ambassadors, authors David Grossman, Amos Oz. As long as U.S. aid isn't in question, Israeli settlements are here to stay.

U.S. aid deal gives green light to Israel's erasure of Palestine., Latuff // Mondoweiss
With New Israel Aid Deal, Obama Is Patron of the Occupation
By Gideon Levy
September 18, 2016
Haaretz (Israel)
Barack Obama is a bad president for Israel. If the military aid he approved for the coming decade is the largest ever, then as a president he is the worst ever for Israel. The last thing Israel needs is more arms, which will push it toward more acts of violence. But Obama is president in a country in which each home has a small tin container - like the blue and white Jewish National Fund boxes over here - into which every U.S. citizen must place a few coins as assistance and charity for poor, needy Israel, weak as a frail leaf.
Three hundred dollars for each U.S. taxpayer for the next 10 years. Not toward America's considerable social needs, not to assist truly needy countries - imagine what $38 billion would do for Africa - but to provide weapons for an army that is one of the most powerfully armed in the world, one of whose main enemies are girls brandishing scissors; to finance an army that is not fighting any other serious army now; the army of a country that few others can match in sheer recalcitrance, one which methodically defies the United States and the international community. And worst of all, this country will receive another free gift, without having to give anything in return. The money will go only toward arming it, which will push it toward more acts of aggression. That's the deal and there has been no serious debate over it, neither in Israel nor in the United States.
In America only a few are asking why. What for? How long? What comes in exchange? And not even what American interest is served by the huge outlay of the American taxpayer. But let's leave America to the Americans. The only discussion in Israel is whether the Americans can be squeezed for more. It's good that it stopped at $38 billion. MK Shelly Yacimovich (Zionist Union) said the prime minister has already told senior security officials that they can "go wild." More assistance would ensure even more wildness. Some of the money will go for defense systems but another part will go for maintaining the occupation and especially to fund violent showy actions, in Gaza and Lebanon, and megalomaniacal useless training exercises against imagined dangers.
"The American aircraft carrier in the Mediterranean," as the Americans (Alexander Haig) and the Israelis (Moshe Ya'alon) like to describe Israel, will continue to launch bombs and fire shells, sometimes unrestrainedly, in the name of American taxpayers and their money. Does Obama want that? That's the outcome of his policy. This generous assistance, the likes of which no other country on earth receives, makes American lip service even more ridiculous as Israel continues to defy Washington. American protest, fury in the State Department, anger in the White House - these are all jokes.
If this is the American aircraft carrier, then the settlements, violation of international law, the crimes, the raids and the wars that America is so careful to decry, are carried out on its own aircraft carrier. Every additional balcony built in a settlement is Made in the U.S.A. Every killing of women and children in Gaza is 'Born in the U.S.A.' Obama is the patron of the occupation, and to hell with the hypocrisy and self-righteousness.
Israelis should not be grateful for U.S. generosity; it is damaging to their country. What does Israel need more armaments for? Why does it need to make war against the barefoot people of Gaza and the young men of the West Bank?
A courageous and honest Israeli statesman would have said long ago: no thank you. That money is not good for us. Even without it the Israel Defense Forces is too big for its needs. But the ritual continues, America pays and Israel occupies and bombards, as if there is no other way. That is Israel's Pyrrhic victory. That is also Prime Minister Benjamin Netanyahu's personal victory: All the accusations about ruining ties with the United States are completely without foundation. Relations have never been better - just look at the numbers.
Nothing has been destroyed in the relationship, and that's a shame. With friends like that one hardly needs enemies. Israel can go on about its business, the check is blank and America is paying, no strings attached, for at least another 10 years. Is there any worse news for Israel?
[Gideon Levy is a Haaretz columnist and a member of the newspaper's editorial board. He joined Haaretz in 1982, and spent four years as the newspaper's deputy editor. He is the author of the weekly Twilight Zone feature, which covers the Israeli occupation in the West Bank and Gaza over the last 25 years, as well as the writer of political editorials for the newspaper. His new book, The Punishment of Gaza, has just been published by Verso Publishing House in London and New York.]
Hundreds of Israeli Intellectuals to World Jewry: `End Occupation for Israel's Sake'
Signatories of letter include seven high-ranking IDF officers, 20 former ambassadors, authors David Grossman, Amos Oz
By Times of Israel staff and AP
September 15, 2016
The Times of Israel 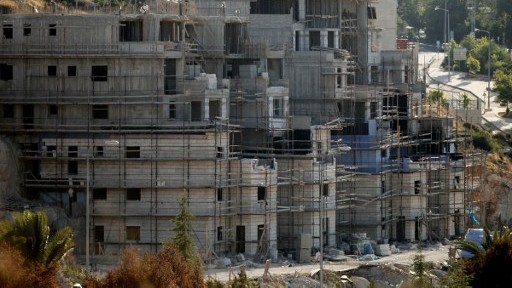 Buildings under construction in the Jewish settlement of Kiryat Arba. outside Hebron, July 6, 2016.
AFP Photo/Hazem Bader // The Times of Israel
Hundreds of Israeli artists and intellectuals urged world Jewry to challenge Israeli policy toward Palestinians, in an open letter released Wednesday.
"We call upon Jews around the world to join with Israeli partners for coordinated action to end the occupation and build a new future, for the sake of the State of Israel and the generations to come," the letter said.

Among the most well-known signatories are authors David Grossman and Amos Oz, Nobel Laureate Daniel Kahneman and 20 former Israeli ambassadors.
"The prolonged occupation is inherently oppressive for Palestinians and fuels mutual bloodshed. It undermines the moral and democratic fabric of the State of Israel and hurts its standing in the community of nations," the letter argued.
The organization "Save Israel, Stop Occupation" seeks to end Israel's control of territories it won during the June 1967 Six-Day War and to establish a Palestinian state. These territories now include the West Bank and East Jerusalem.
The organization's director Jessica Montell said Israel's military rule "harms Israeli society and it harms Jews around the world."
Israel began building settlements in the West Bank after it captured the territory, previously controlled by Jordan, in the 1967 Six Day War. Today, over 350,000 Israelis live in West Bank settlements and outposts and another 200,000 in East Jerusalem, which Israel considers part of its territory.
The International community considers Israeli building in the West Bank and East Jerusalem illegal. Jerusalem argues the status of West Bank settlements is subject to a final peace deal with the Palestinians.
Israeli foreign ministry spokesman Emmanuel Nahshon declined to comment on the letter. He said "we call upon the Palestinians to return to the negotiations table."
Peace efforts have been at a standstill since a US-led initiative collapsed in April 2014.
Russia's Foreign Ministry announced last Thursday that Israeli and Palestinian leaders have agreed "in principle" to meet in Moscow for talks, but no date has been set.
As Long as U.S. Aid Isn't in Question, Israeli Settlements Are Here to Stay
Neither the terrifying Donald Trump nor the more reasonable Hillary Clinton will change the trend in any way.
By Ravit Hecht
September 16, 2016
Haaretz (Israel) 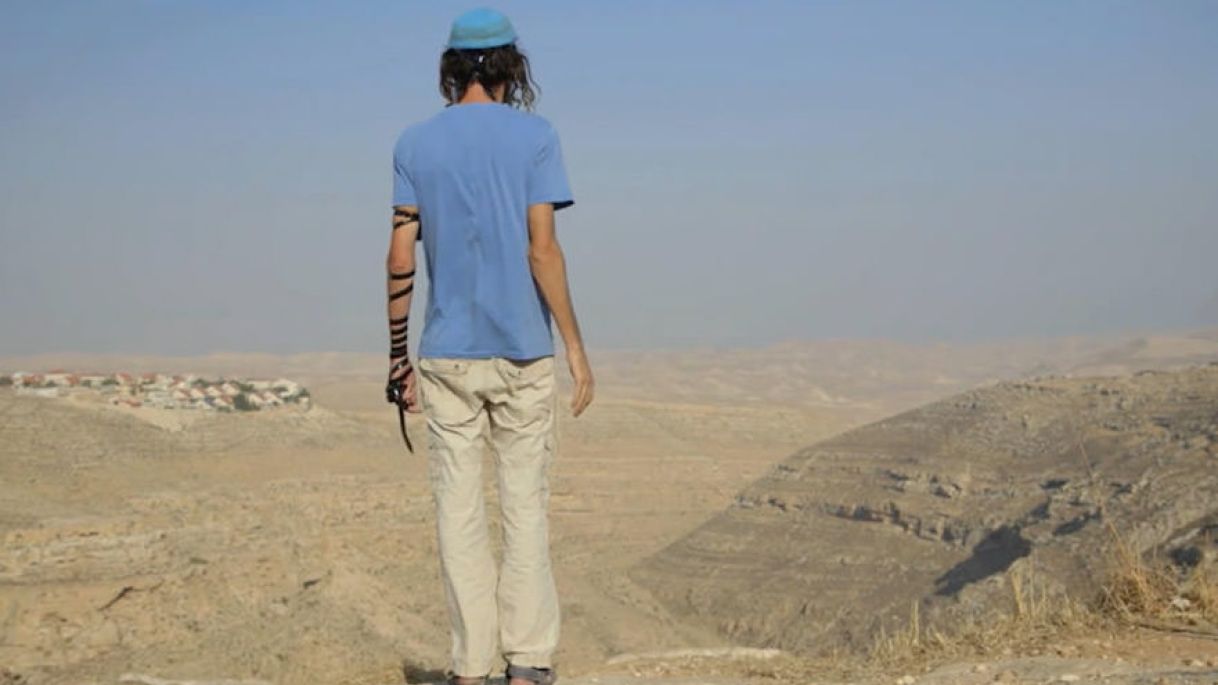 A still from "The Settlers," which premiered Jan. 22 at the Sundance Film Festival.
Photo credit: Philippe Bellaiche // Haaretz
Supporters and opponents of Prime Minister Benjamin Netanyahu are heatedly arguing over whether the U.S. military aid agreement is a success or failure. Could the deal, which grants Israel the largest sum in the history of the two countries' relations, have been better without Netanyahu's speech to Congress against Barack Obama on the Iranian nuclear agreement?
Would it have been better if he simply showed the U.S. president a bit more respect? For example, he didn't necessarily have to openly support a different candidate for president, and he didn't have to appoint a declared Republican as Israel's ambassador. Or - just a little thing - he didn't have to appoint as his chief spokesman a man who called Obama "anti-Semitic."
The gist of the dispute is the realization that the distorted relations between a superpower and a vassal state have undergone a kind of cartoonish reversal. It could be that the nominal or real gaps between the old aid package and the new one are trivial. Either way, the aid itself, which is received here with more nonchalance than the sun rising, is a crazy bonanza for Israel and testimony to the weakness of the American government.
For a long time, certainly since it captured the territories in 1967, Israel has done largely what it wants. This is based on the popular belief - justified by politicians and defense officials - that the United States has to thank Israel for its existence and the right to pay it hundreds of millions of dollars a year. Netanyahu didn't invent this; he may only have refined it and added the embittered relations with the current president.
The United States hasn't recognized the annexation of East Jerusalem after the Six-Day War. Various attempts since the end of that war to promote a withdrawal from the territories and stop the settlement enterprise have led nowhere. Every once in a while Washington has tried to oppose the occupation and settlements using practical means, too.
James Baker, for example, dared make the granting of loan guarantees for absorbing Soviet immigrants conditional on the money not being used for settlement construction. He discovered that, with Aipac's support, Israel was threatening to bypass the administration and ask Congress for the guarantees.
But in the end, without the use of a real stick, Israel continued to ignore the administration's position. Israel remained in the territories and expanded the settlements until it turned them into an integral, even choice part of the State of Israel.
If you will, let's remain faithful to the image Netanyahu provided in his speech to the Aipac conference in March 2015. Employing a bit of Yiddish, he said Israel and the United States were mishpoche (family). After all, in many families there's a disturbed child who terrorizes his parents, and they opt for the variant of giving in.
Once in a while, when he does something really annoying, the family applies a quarter of its muscle to keep him in line, which is accompanied by half a look. For example, they ask for a temporary construction freeze in the territories, which he has been asked to evacuate for the past 30 years.
The more these relations are twisted, the more the disturbed child becomes convinced in the validity of his false conception of reality. The more these relations are twisted, the more he wraps his critical lack of understanding in imaginary existential angst (anti-Semitism, destruction, the Holocaust), or in flattery (bravery, Israeli chutzpah).
And maybe the United States, just as Israel, is suffering from a syndrome too, a phantom limb syndrome. It feels it still has a limb it lost long ago.
If you observe the candidates in the U.S. presidential election, you realize that what has been is what will be. Neither the terrifying Donald Trump nor the more reasonable Hillary Clinton will change the trend in any way. The friendship with Israel isn't in any doubt, and the military aid isn't in any doubt. As a result, Israel's rule over the territories isn't in any doubt.