Rising inequality is largely to blame for this electoral upset. Continuing with business as usual is not an option. People have lost their sense of security, status and even identity. This result is the scream of an America desperate for radical change. People have a right to be angry, and a powerful, intersectional left agenda can direct that anger where it belongs. Thomas Piketty and Naomi Klein offer up interesting analysis. 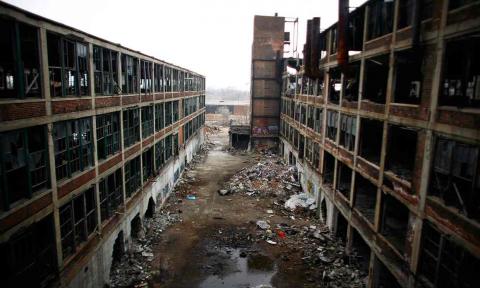 The abandoned and decaying manufacturing plant of Packard Motor Car in Detroit, Michigan., Photograph: Eric Thayer/Reuters // The Guardian
Rethink Globalization, Or Trumpism Prevails
By Thomas Piketty
November 16, 2016
The Guardian (US)
Let it be said at once: Trump's victory is primarily due to the explosion in economic and geographic inequality in the United States over several decades and the inability of successive governments to deal with this.
Both the Clinton and the Obama administrations frequently went along with the market liberalization launched under Reagan and both Bush presidencies. At times they even outdid them: the financial and commercial deregulation carried out under Clinton is an example. What sealed the deal, though, was the suspicion that the Democrats were too close to Wall Street - and the inability of the Democratic media elite to learn the lessons from the Sanders vote.
Hillary won the popular vote by a whisker (60.1 million votes as against 59.8 million for Trump, out of a total adult population of 240 million), but the participation of the youngest and the lowest income groups was much too low to enable key states to be won.
The tragedy is that Trump's program will only strengthen the trend towards inequality. He intends to abolish the health insurance laboriously granted to low-paid workers under Obama and to set the country on a headlong course into fiscal dumping, with a reduction from 35% to 15% in the rate of federal tax on corporation profits, whereas to date the United States had resisted this trend, already witnessed in Europe.
In addition, the increasing role of ethnicity in American politics does not bode well for the future if new compromises are not found. In the United States, 60% of the white majority votes for one party while over 70% of the minorities vote for the other. In addition to this, the majority is on the verge of losing its numerical advantage (70% of the votes cast in 2016, as compared with 80% in 2000 and 50% forecast in 2040).
The main lesson for Europe and the world is clear: as a matter of urgency, globalization must be fundamentally re-oriented. The main challenges of our times are the rise in inequality and global warming. We must therefore implement international treaties enabling us to respond to these challenges and to promote a model for fair and sustainable development.
Agreements of a new type can, if necessary, include measures aimed at facilitating these exchanges. But the question of liberalizing trade should no longer be the main focus. Trade must once again become a means in the service of higher ends. It never should have become anything other than that.
There should be no more signing of international agreements that reduce customs duties and other commercial barriers without including quantified and binding measures to combat fiscal and climate dumping in those same treaties. For example, there could be common minimum rates of corporation tax and targets for carbon emissions which can be verified and sanctioned. It is no longer possible to negotiate trade treaties for free trade with nothing in exchange.
From this point of view, Ceta, the EU-Canada free trade deal, should be rejected. It is a treaty which belongs to another age. This strictly commercial treaty contains absolutely no restrictive measures concerning fiscal or climate issues. It does, however, contain a considerable reference to the "protection of investors". This enables multinationals to sue states under private arbitration courts, bypassing the public tribunals available to one and all.
The legal supervision proposed is clearly inadequate, in particular concerning the key question of the remuneration of the arbitrators-cum-referees and will lead to all sorts of abuses. At the very time when American legal imperialism is gaining in strength and imposing its rules and its dues on our companies, this decline in public justice is an aberration. The priority, on the contrary, should be the construction of strong public authorities, with the creation of a prosecutor, including a European state prosecutor, capable of enforcing their decisions.
The Paris Accords had a purely theoretical aim of limiting global warming to 1.5 degrees. This would, for example, require the oil found in the tar sands in Alberta to be left in the ground. But Canada has just started mining there again. So what sense is there in signing this agreement and then, only a few months later, signing a highly restrictive commercial treaty without a single mention of this question?
A balanced treaty between Canada and Europe, aimed at promoting a partnership for fair and sustainable development, should begin by specifying the emission targets of each signatory and the practical commitments to achieve these.
In matters of fiscal dumping and minimum rates of taxation on corporation profits, this would obviously mean a complete paradigm change for Europe, which was constructed as a free trade area with no common fiscal policy. This change is essential. What sense is there in agreeing on a common fiscal policy (which is the one area in which Europe has achieved some progress for the moment) if each country can then fix a near-zero rate and attract all the major company headquarters?
It is time to change the political discourse on globalization: trade is a good thing, but fair and sustainable development also demands public services, infrastructure, health and education systems. In turn, these themselves demand fair taxation systems. If we fail to deliver these, Trumpism will prevail.
[Thomas Piketty is professor of economics at the Paris School of Economics. He is the author of numerous articles and books, including Capital in the Twenty-First Century.]
This piece was first published in Le Monde on 12 November 2016
It was the Democrats' Embrace of Neoliberalism That Won It for Trump
By Naomi Klein
November 9, 2016
The Guardian (UK) 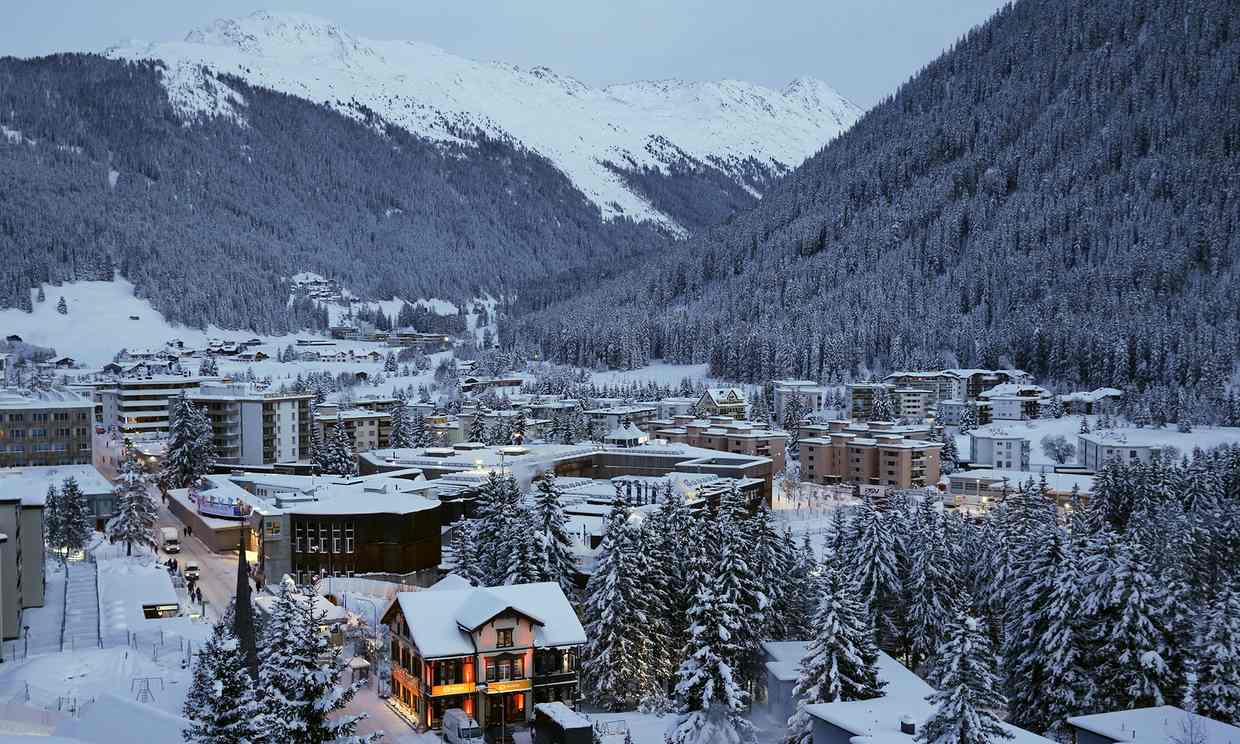 Davos - where the global elite gather every winter to discuss and decide on economic policy effecting the rest of us. `Elite neoliberalism unleashed the Davos class. People such as Hillary and Bill Clinton are the toast of the Davos party. In truth, they threw the party.'
Photograph: Ruben Sprich/Reuters // The Guardian
They will blame James Comey and the FBI. They will blame voter suppression and racism. They will blame Bernie or bust and misogyny. They will blame third parties and independent candidates. They will blame the corporate media for giving him the platform, social media for being a bullhorn, and WikiLeaks for airing the laundry.
But this leaves out the force most responsible for creating the nightmare in which we now find ourselves wide awake: neoliberalism. That worldview - fully embodied by Hillary Clinton and her machine - is no match for Trump-style extremism. The decision to run one against the other is what sealed our fate. If we learn nothing else, can we please learn from that mistake?
Here is what we need to understand: a hell of a lot of people are in pain. Under neoliberal policies of deregulation, privatisation, austerity and corporate trade, their living standards have declined precipitously. They have lost jobs. They have lost pensions. They have lost much of the safety net that used to make these losses less frightening. They see a future for their kids even worse than their precarious present.
At the same time, they have witnessed the rise of the Davos class, a hyper-connected network of banking and tech billionaires, elected leaders who are awfully cosy with those interests, and Hollywood celebrities who make the whole thing seem unbearably glamorous. Success is a party to which they were not invited, and they know in their hearts that this rising wealth and power is somehow directly connected to their growing debts and powerlessness.
For the people who saw security and status as their birthright - and that means white men most of all - these losses are unbearable.
Donald Trump speaks directly to that pain. The Brexit campaign spoke to that pain. So do all of the rising far-right parties in Europe. They answer it with nostalgic nationalism and anger at remote economic bureaucracies - whether Washington, the North American free trade agreement the World Trade Organisation or the EU. And of course, they answer it by bashing immigrants and people of colour, vilifying Muslims, and degrading women. Elite neoliberalism has nothing to offer that pain, because neoliberalism unleashed the Davos class. People such as Hillary and Bill Clinton are the toast of the Davos party. In truth, they threw the party.
Trump's message was: "All is hell." Clinton answered: "All is well." But it's not well - far from it.
Neo-fascist responses to rampant insecurity and inequality are not going to go away. But what we know from the 1930s is that what it takes to do battle with fascism is a real left. A good chunk of Trump's support could be peeled away if there were a genuine redistributive agenda on the table. An agenda to take on the billionaire class with more than rhetoric, and use the money for a green new deal. Such a plan could create a tidal wave of well-paying unionised jobs, bring badly needed resources and opportunities to communities of colour, and insist that polluters should pay for workers to be retrained and fully included in this future.
It could fashion policies that fight institutionalised racism, economic inequality and climate change at the same time. It could take on bad trade deals and police violence, and honour indigenous people as the original protectors of the land, water and air.
People have a right to be angry, and a powerful, intersectional left agenda can direct that anger where it belongs, while fighting for holistic solutions that will bring a frayed society together.
Such a coalition is possible. In Canada, we have begun to cobble it together under the banner of a people's agenda called The Leap Manifesto, endorsed by more than 220 organisations from Greenpeace Canada to Black Lives Matter Toronto, and some of our largest trade unions.
Bernie Sanders' amazing campaign went a long way towards building this sort of coalition, and demonstrated that the appetite for democratic socialism is out there. But early on, there was a failure in the campaign to connect with older black and Latino voters who are the demographic most abused by our current economic model. That failure prevented the campaign from reaching its full potential. Those mistakes can be corrected and a bold, transformative coalition is there to be built on.
That is the task ahead. The Democratic party needs to be either decisively wrested from pro-corporate neoliberals, or it needs to be abandoned. From Elizabeth Warren to Nina Turner, to the Occupy alumni who took the Bernie campaign supernova, there is a stronger field of coalition-inspiring progressive leaders out there than at any point in my lifetime. We are "leaderful", as many in the Movement for Black Lives say.
So let's get out of shock as fast as we can and build the kind of radical movement that has a genuine answer to the hate and fear represented by the Trumps of this world. Let's set aside whatever is keeping us apart and start right now.
[Naomi Klein is the author of This Changes Everything: Capitalism vs the Climate. She tweets @NaomiAKlein.]
Subscribe to Portside