Israel must cloak itself in sorrow over what happened since that terrible summer of 1967, when it won a war and lost nearly everything. Israel is to hold lavish celebrations over the coming weeks to mark the 50th anniversary of what it calls the “liberation of Judea, Samaria and the Golan Heights” – or what the rest of us describe as the birth of the occupation. 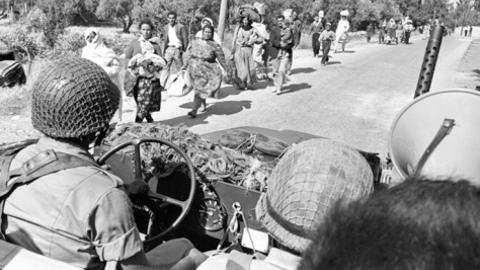 Israeli Border Police watch Palestinians returning to Jenin after the 1967 Six-Day War., Credit: Aryeh Kanper, GPO // Haaretz
Our Nakba
By Gideon Levy
April 16, 2017
Haaretz (Israel)
This is a jubilee year: 50 years after the greatest Jewish disaster since the Holocaust, 50 years after the greatest Palestinian disaster since the Nakba. It is the jubilee of their second Nakba and our first. A moment before the start of the celebrations to mark the 50th anniversary of the “liberation” of the territories, we should remember that it was a disaster. A great disaster for the Palestinians, of course, but also a fateful disaster for the Jews here. 2017 ought to be a year of soul-searching in Israel, a year of unparalleled sadness. It is already clear that it will not be. Instead, the government plans to make it a year of celebration, celebrating the occupation. Ten million shekels ($2.74 million) have already been allocated to celebrate 50 years of suppression of another people, 50 years of rot and internal destruction.
A state that celebrates 50 years of occupation is a state whose sense of direction has been lost, its ability to distinguish good from evil impaired. A military victory may be celebrated, but to celebrate decades of brutal military conquest? What exactly is there to celebrate, Israelis? Fifty years of bloodshed, abuse, disinheritance and sadism? Only societies that have no conscience celebrate such anniversaries. It is not only on account of the suffering it causes the Palestinians that Israel must refrain from celebrating the anniversary. It must cloak itself in sorrow also over what has happened to Israel since that terrible summer of 1967, the summer in which it won a war and lost nearly everything.
A great disaster struck us. Like a kibbutz or moshav where farmland has been sold to private residential developers, ruining the community’s character, like gentrification that runs roughshod over the poor, like a once-healthy body now riddled with cancer, so Israel has grown since the summer of 1967, its DNA damaged. It is enough to look at Jerusalem which went from being a charming university city with government institutions to a monster ruled by the Border Police.
It began with the ultranationalist-religious orgy that swept over everyone but for a handful of prophets, and continues today, through the familiar mechanisms of brainwashing. Size matters, in Israel’s case: It has turned it into an evil, violent, ultranationalist, religious, racist state. It wasn’t perfect before, but in 1967 the seeds of calamity were sowed. We must not blame all the state’s ills on the occupation — not every nightclub stabbing is perpetrated by a veteran of the army’s Kfir Brigade. And we do not have to believe that everything is blacker than black in order to comprehend the enormity of the disaster. From a state that began as a brand plucked from a fire, modest, insecure, hesitant, chalking up amazing accomplishments that the whole world marveled at, to an arrogant, despised state, marveled at only by those that resemble it.
All this began in 1967. Not that 1948 was so pure, far from it, but 1967 accelerated, institutionalized and legitimized the decline. It gave birth to the ongoing contempt for the world, the bragging and bullying. In 1967 the occupation began. It metastasized wildly inward, from the roadblocks in the West Bank to the nightclubs in Tel Aviv, from the refugee camps to the roads and the supermarket lines. Israel’s language became the language of force, everywhere. The success of the Six-Day War was too much for it — some successes are like that — and after came the boast, “to us, all is permitted.”
It began with the victory photo albums and the songs — “Nasser is waiting for Rabin, ai, yai, yai” and “We have returned to you, Sharm el-Sheikh.” Right after the hangover came the signs of cancer: The religious suddenly became messianic, the moderates ultranationalist, and it’s a short road from there.
Nothing stood in the way of Israel becoming what it is, at home or abroad. It perpetuates the occupation, although it ostensibly didn’t want it from the outset, because it could. And it established an apartheid regime in the territories, because there is no other kind of occupation.
Now it’s here. Strong, armed and rich as it never was in 1967. Corrupt and rotten as only an occupying country can be. That is what we are supposed to celebrate. And that is what we must weep over.
[Gideon Levy is a Haaretz columnist and a member of the newspaper's editorial board. He joined Haaretz in 1982, and spent four years as the newspaper's deputy editor. He is the author of the weekly Twilight Zone feature, which covers the Israeli occupation in the West Bank and Gaza over the last 25 years, as well as the writer of political editorials for the newspaper. His new book, The Punishment of Gaza, was published by Verso Publishing House in London and New York.]
Israel celebrates 50 years as occupier
By Jonathan Cook
April 19, 2017
Mondoweiss 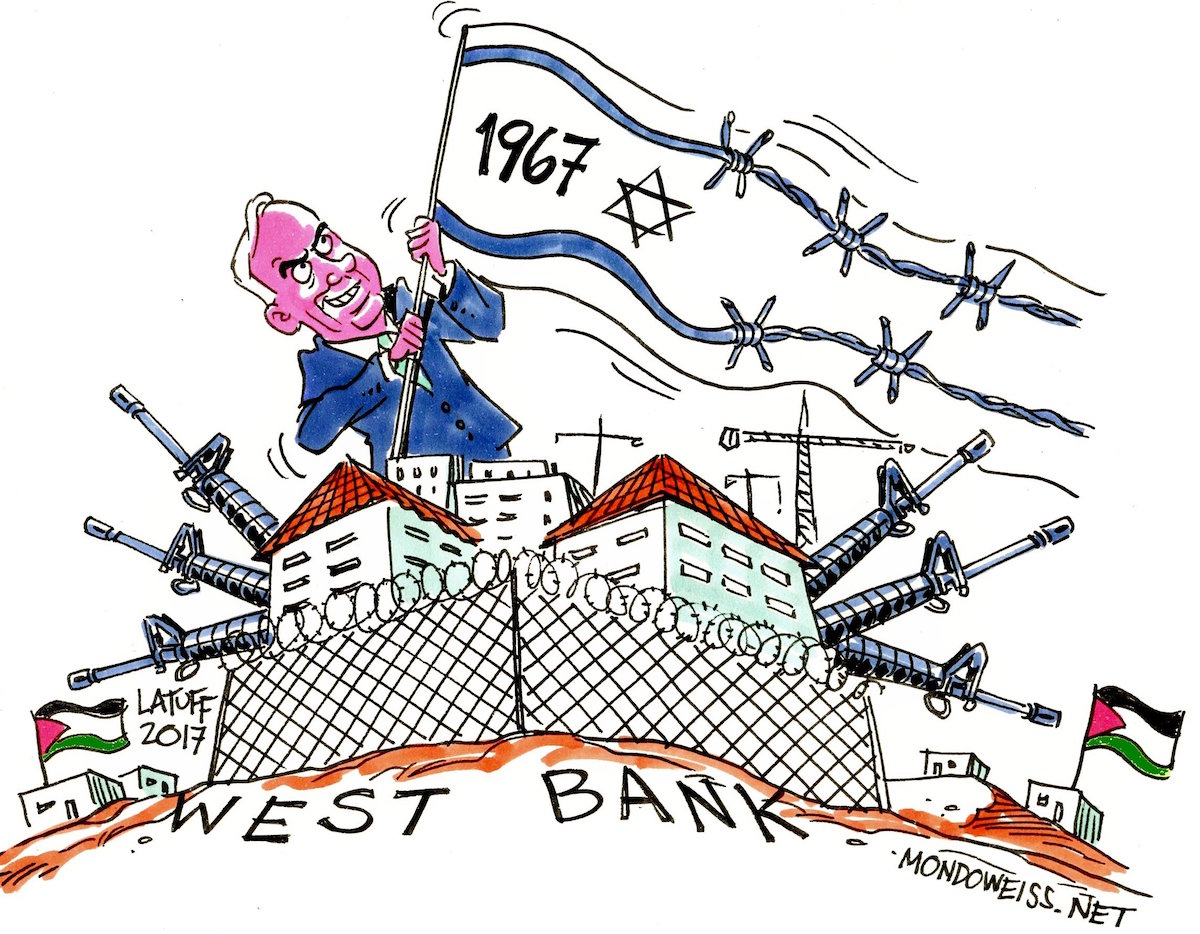 Credit: Carlos Latuff
Israel is to hold lavish celebrations over the coming weeks to mark the 50th anniversary of what it calls the “liberation of Judea, Samaria and the Golan Heights” – or what the rest of us describe as the birth of the occupation.
The centerpiece event will take place in Gush Etzion, south of Jerusalem. The West Bank settlement “bloc” enjoys wide support in Israel, not least because it was established long ago by the supposedly left-wing Labour party, now heading the opposition.
The jubilee is a potent reminder that for Israelis, most of whom have never known a time before the occupation, Israel’s rule over the Palestinians seems as irreversible as the laws of nature. But the extravagance of the festivities also underscores the growth over five decades of Israel’s self-assurance as an occupier.
Documents found this month in Israel’s archives reveal that, when Israel captured East Jerusalem in 1967, its first concern was to hoodwink the international community.
The foreign ministry ordered Israel’s ambassadors to mischaracterize its illegal annexation of East Jerusalem as a simple “municipal fusion”. To avoid diplomatic reprisals, Israel claimed it was necessary to ease the provision of essential services to the occupied Palestinian population.
Interestingly, those drafting the order advised that the deception was unlikely to succeed. The United States had already insisted that Israel commit no unilateral moves.
But within months Israel had evicted thousands of Palestinians from the Old City and destroyed their homes. Washington and Europe have been turning a blind eye to such actions ever since.
One of the Zionist movement’s favorite early slogans was: “Dunam after dunam, goat after goat”. The seizure of small areas of territory measured in dunams, the demolition of the odd home, and the gradual destruction of herding animals would slowly drive the Palestinians off most of their land, “liberating” it for Jewish colonization. If it was done piecemeal, the objections from overseas would remain muffled. It has proved a winning formula.
Fifty years on, the colonization of East Jerusalem and the West Bank is so entrenched that a two-state solution is nothing more than a pipe dream.
Nonetheless, US president Donald Trump has chosen this inauspicious moment to dispatch an envoy, Jason Greenblatt, to end the Israeli-Palestinian conflict.
In a “goodwill” response, Israeli prime minister Benjamin Netanyahu has unveiled a framework for settlement building. It is exactly the kind of formula for deception that has helped Israel consolidate the occupation since 1967.
Netanyahu says expansion will be “restricted” to “previously developed” settlements, or “adjacent” areas, or, depending on the terrain, “land close” to a settlement.
Peace Now points out that the settlements already have jurisdiction over some 10 per cent of the West Bank, while far more is treated as “state land”. The new framework, says the group, gives the settlers a green light to “build everywhere”.
The Trump White House has shrugged its shoulders. A statement following Netanyahu’s announcement judged the settlements no “impediment to peace”, adding that Israel’s commitments to previous US administrations would be treated as moot.
Effectively, the US is wiping the slate clean, creating a new baseline for negotiations after decades of Israeli changes stripping the Palestinians of territory and rights.
Although none of this bodes well, Egypt and Jordan’s leaders met Trump this month to push for renewed talks between Israel and the Palestinians. The White House is said to be preparing to welcome the Palestinian president, Mahmoud Abbas.
Some senior Palestinians are rightly wary. Abbas Zaki, a Fatah leader, fears Trump will try to impose a regional solution on Arab states, over Abbas’s head, designed to “eliminate the Palestinian cause altogether”.
David Ben Gurion, Israel’s founding father, reportedly once said: “What matters is not what the goyim [non-Jews] say, but what the Jews do.”
For nearly a quarter of a century, the Oslo accords dangled an illusory peace carrot that usefully distracted the global community as Israel nearly quadrupled its settler population, making even a highly circumscribed Palestinian state unrealizable.
Now, that game plan is about to be revived in new form. While the US, Israel, Jordan and Egypt focus on the hopeless task of creating a regional framework for peace, Israel will be left undisturbed once again to seize more dunams and more goats.
In Israel, the debate is no longer simply about whether to build settler homes, or about how many can be justified. Government ministers argue instead about the best moment to annex vast areas of the West Bank associated with so-called settlement blocs such as Gush Etzion.
Israel’s imminent celebrations should lay to rest any confusion that the occupation is still considered temporary. But when occupation becomes permanent, it metamorphoses into something far uglier.
It is past time to recognize that Israel has established an apartheid regime and one that serves as a vehicle for incremental ethnic cleansing. If there are to be talks, ending that outrage must be their first task.
A version of this article first appeared in the National, Abu Dhabi.
[Jonathan Cook won the Martha Gellhorn Special Prize for Journalism. His latest books are “Israel and the Clash of Civilisations: Iraq, Iran and the Plan to Remake the Middle East” (Pluto Press) and “Disappearing Palestine: Israel’s Experiments in Human Despair” (Zed Books). His new website is jonathan-cook.net.]