We talked to the National Employment Law Project’s Nayantara Mehta about how apps like Uber exploit workers and dress up old models of discrimination in shiny new clothes. 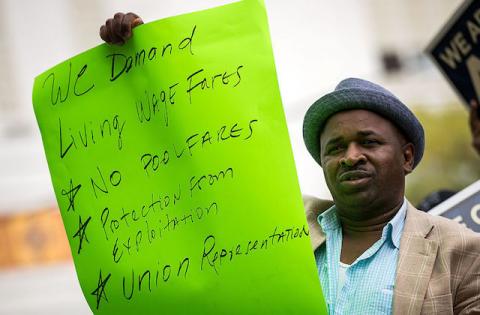 Harouna Kaba, who drives for both Uber and Lyft, protests during a rally to call on the New York City Taxi and Limousine Commission to force Uber and Lyft to hold union elections, September 27, 2016, in the Queens borough of New York City. , Drew Angerer/Getty Images

It’s hard to have a conversation about work in the 21st century without talking about the so-called “gig economy” and the slew of apps—from Uber to TaskRabbit to Fiverr—that promise to revolutionize everything from errand-running to public transportation. But behind these companies’ flashy design and world-disrupting messaging lies something else: Good old-fashioned exploitation, as a growing fleet of workers is being denied basic protection from racial discrimination.

Provisions like Title VII of the Civil Rights Act of 1964—which bars employers from discriminating on the basis of race, color, religion, sex and national origin—apply only to legally recognized employees. Gig economy companies tend to classify drivers and “taskers” as independent contractors instead, which excludes them from adhering to most of the laws that regulate workplaces and protect employees.

Few people think about the gig (or “on-demand”) economy’s impact on workers more than Nayantara Mehta, senior staff attorney at the National Employment Law Project. In addition to her writing and advocacy around Uber and other ride-hailing apps, Mehta focuses on eliminating barriers to employment for people with criminal records. Colorlines caught up with her by phone to talk about the discrimination hardwired into the on-demand economy and what workers are doing to fight back against it.

To start off, what does the on-demand economy workforce actually look like? Who are these workers, and what sorts of jobs are they doing?
Many workers in the on-demand economy—people who get work through an app—work part-time or only occasionally, but there are workers who do this work full-time. And for companies like Uber that rely on the constant availability of drivers to meet passenger demand, those full-time drivers end up performing a lot of the company’s driving hours.

One of the problems is that we just don’t have data from the companies. We have a sense of the number of hours people are working, but not so much the demographics of the drivers and the workers. We get a lot of information from interviews and other sources outside the company, but it’d be helpful to have information directly from the companies.

Most employers report on the demographics of their workforce, but these companies tend to be particularly opaque because they’re selling a story of themselves as a place where people go to earn some extra money for vacation or to pay for their kid’s sports trips. But we don’t know the reality to be able to really assess what companies are saying. It reminds me of the fast food industry’s positioning of itself as people’s first job, where teenagers work. Actually it’s a lot of people providing for their families who work there. It kind of obscures the responsibility to the workers when these companies say they just employ teenagers looking to make pocket money. Also, that people need to earn extra money on top of, say, working full time tells us something about our economy—that people need to work multiple jobs in order to make ends meet.

The on-demand economy is seen as a kind of Wild West environment when it comes to labor law. What special risk does this pose to workers of color?
Sometimes the way we talk about the rise of the gig economy ignores that the companies in it are just doing what a lot of companies do. They’re using a model that already exists, which is to call their workers independent contractors. That puts the risks and burdens on the workers, while the company gets the profits. That’s not a new approach.

The on-demand economy is also a very small percentage of the economy. Because they take up so much space in the media and they’re consumed by people in a more direct way, it can feel like they’re more prevalent. But they also take up a lot of space in policy-making conversations. Uber, for example, has used its lobbying heft to go in and change laws in various states to make them more friendly to Uber, and enshrine that their drivers are independent contractors.

So there’s nothing new about how this harms workers of color in particular. What’s more challenging is the lack of transparency from some of these companies. They say, “We are not employers therefore we don’t have to pay into workers comp and we’re going to fight your unemployment claim and we’re not subject to Title VII because we’re not your employer.” That’s an uphill battle for anyone who’s misclassified as an independent contractor, and happens across low-wage sectors.

One of our allies at a legal services organization in Newark had a client who was just denied a job at Uber Eats due to a really old conviction record that really should not have been a barrier to his working there. But there’s no accountability. There’s no ability to ask Uber to explain why that would be valid. In the context of the ratings system it’s particularly pernicious. What these rating systems allow is for all the biases that exist out there in society in customers—whether intentional or not—to translate into affecting a worker’s livelihood. That’s particularly troublesome from the standpoint of these companies outsourcing their management to customers through these rating systems.

The reason that matters, because this can seem like an arcane distinction, is that basically all of the rights most of us associate with working—access to workers’ compensation and unemployment, protections from being discriminated against and harassment and wage theft, being paid a minimum wage—these things come with being an employee. Minimum wage and discrimination and unemployment laws apply to employees.

How do those laws differ from state to state?
Where people are able to challenge misclassification has come up in state agency decisions. Let’s say an Uber driver is deactivated (which is their parlance for firing them) and goes to an unemployment agency and files for unemployment. The agency then has to determine that they’re actually an employee who is eligible for unemployment benefits, because an independent contractor is not. What we’ve seen is a few states having made the determination that the workers are in fact employees for the purposes of the state’s unemployment insurance laws. This happened in California and in New York most recently. Where workers are deemed to be employees is basically only where workers are demanding it, but it’s very specific to their personal situations. So it’s not as if the state suddenly says everyone who works for this company is an employee. That’s not happening yet.

And what kinds of discrimination are customers open to?
We shouldn’t ignore when we’re asking the companies to do better that their drivers’ own discrimination against a customer’s race might affect the customer’s ability to access the service. There have been stories about how people have experienced longer wait times, and there’s a general opacity around how people are making decisions about who they do and do not pick up. We just don’t have that information. Passengers with disabilities not being able to access the services is another huge issue. The companies say they’re this revolutionary product and don’t have to comply with all these old regulations, but sometimes those regulations exist and often they exist to make sure the service is fair and that people don’t get left out.

How can the design of these apps, the way the code is written, figure into discrimination?
Let’s say Uber decides all their workers are employees. It doesn’t get at the problem that the rating systems, the systems used to assess workers, don’t take into account the bias and discrimination of customers. Being classified as an employee is not going to protect the driver from that. What seem like neutral systems can actually harm workers of color, which is a persistent problem in the on-demand economy. That won’t change until the company does whatever training is needed of the programmers. There needs to be a real mechanism where they allow somebody in to engage in good faith in addressing this problem—not just get some good PR for small changes.

If I’m reading this and I’m, say, an Uber driving on the losing end of these dynamics, what can I start doing right now?
They passed an ordinance in Seattle that allows ride-hailing drivers to collectively bargain. Only those who are technically employees have the legally protected ability to collectively bargain. Leaving aside the question of whether they’re employees, Seattle said that even if they are independent contractors they have the right to organize. The response from Uber and Lyft has been very telling. They’ve both really opposed this and undermined drivers’ ability to organize. And that’s the only power drivers have is if they come together. An individual driver has no power against Uber, and it seems like Uber is really trying to squash this.

So the way an individual driver can change things is to join with other drivers. Drivers should also be part of the conversations where people are debating the policies. Too many of the conversations that are happening on this don’t really take into account what drivers want.

Kate Aronoff is a Brooklyn-based writing fellow at In These Times, where she covers the politics of climate change, the White House transition and the resistance to Trump’s agenda. Her work has appeared in Harpers, The New York Times and Jacobin, among other outlets. Follow her on Twitter.