Reader Comments: Time to Stop Honoring Traitors Who Fought for Slavery - Take Down ALL Symbols of Hate - Sign the petition; Kareem Abdul-Jabbar on Colin Kaepernick; Growing Up White in America - Unlearning the Myth of American Innocence; DSA's Convention - initial reader responses - what do you think?; Will Democrats Support Single-Payer in future elections; The Forgotten World of Communist Bookstores; lots of resources; and more.... 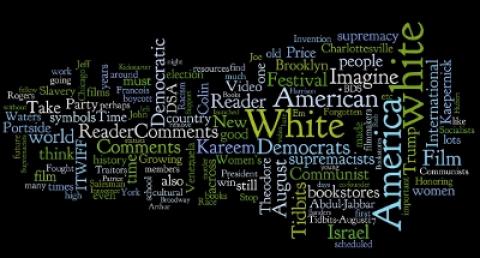 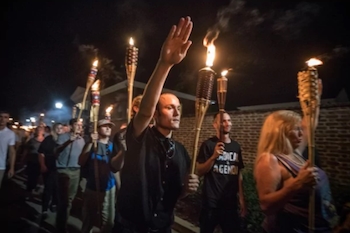 Sign here.
White supremacists killed someone in Charlottesville yesterday. Friday night they marched through Charlottesville and the University of Virginia grounds, carrying torches that evoked a history of violent racial terrorism intended to intimidate a community that had recently renamed Robert E Lee Park to Emancipation Park.
Saturday, white supremacists took the step of ramming into a crowd of peaceful protesters, killing at least one person and injuring more than a dozen others in the name of "honoring" their heritage of hate.
As Tampa and New Orleans are in the process of removing these symbols after sustained organizing, we see why it's so important to keep fighting to remove these statues in honor of slaveowners. After the election of Donald Trump white supremacists have been emboldened and ever more threatening. We must continue to fight to reclaim our public spaces removing all confederate symbols and let white supremacists know they have no place to rally in our country.
Take em ALL down! Join us in calling to remove all Confederate symbols from all places of honor in America.
It is past time that we nationally stop the veneration of people who committed treason in the name of slavery! We can no longer coddle white supremacists and indulge their lies about heritage. The Charlottesville murder has to be the moment that forces us to reckon with white supremacy! The continued display of white supremacist symbols in places of honor only serves to further signal that white supremacy is not only tolerated in America but celebrated.
White supremacists are rallying around Confederate statues and using them as a pretext to commit terrorism and murder. Since the Dylann Roof massacre we have seen a national movement to remove symbols of the Confederacy across the nation. As we have been able to find success in cities like Tampa and New Orleans white supremacists have become more desperate as they've been emboldened by Trump.
We cannot allow these white supremacist terrorists to intimidate us from confronting and working to dismantle symbols of white supremacy. Confederate statues are a symbol of white supremacy and its current political power. Terrorists in Charlottesville understood this and were willing to kill in the name of their symbol, we must be determined to persist in the face of this white supremacist terror. We saw in New Orleans what the sustained effort of Take Em Down NOLA has already accomplished as they organized members of the community and launched a campaign on OrganizeFor which has already brought down several monuments. We must continue this effort and Take Em ALL Down everywhere across the country.
Join us now to tell America that we can't keep coddling white supremacy. Take em ALL down!
Until justice is real,
--Rashad, Arisha, Johnny, Thomas, Kristen, Chad and the rest of the Color Of Change team
Six Months of Donald Trump 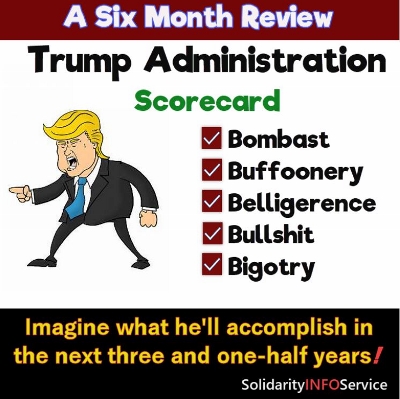 Solidarity Info Services
4654 Congress Ave., Oakland, CA 94601
Re: No, Mr. Trump, It’s Not About Bigotry On All Sides: It’s About White Supremacists
Let's not kid ourselves. The fascist right is on the rise in the USA. We must unite to defeat them and their supports even if this includes the so-called President of the U.S. This man is a bad dude and he must be exposed at every opportunity!!!!
Peter Schnall‎
Posted on Portside's Facebook page
https://www.facebook.com/Portside.PortsideLabor
Re: 8 in 10 Americans Fear Nuclear War as Trump Says US 'Locked and Loaded'
Seriously, Americans have heard of the "pull out" method, right? It's not 100% effective, but it's safer than going without protection  :>)
Josh Davis
Posted on Portside's Facebook page
https://www.facebook.com/Portside.PortsideLabor
It's Only Six Months - Cartoon by Rob Rogers 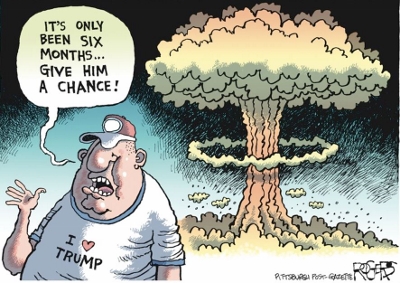 View here.
(2:13:05)
Lucas Koerner speaks on the present conflict in Venezuela and the role of the United States. This program was recorded by Chicago Access Network Television (CAN TV). (Published on Aug 10, 2017)
Lucas Koerner is a journalist at Venezuelanalysis based in Caracas, Venezuela.
Video on Theodore W. Allen's "The Invention of the White Race" 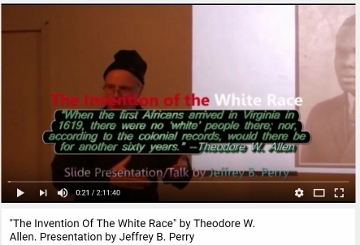 Video time: 2:11:40
This video presentation on Theodore W. Allen’s “The Invention of White Race,” which opens with some insights from the life and work of Hubert Harrison, has just passed the 111,000-Viewers Mark. It has much important information – please take time to watch it and to share it!
Jeffrey B. Perry
["The Invention of the White Race" (Verso Books) by Theodore W. Allen, especially Vol. II: "The Origin of Racial Oppression in Anglo-America."
This Slide Presentation/Talk by Jeffrey B. Perry, which draws on insights from Hubert Harrison, was hosted by The Hubert Harrison and Theodore W. Allen Society on January 31, 2013, at the Brecht Forum, when it was still located in lower Manhattan.
On this cold night the building had no heat. The standing room only audience is testimony to the growing interest in Theodore W. Allen's important work and in the struggle against white supremacy.
The video was shot by Fred Nguyen and made available Courtesy Fansmiles Productions.]
The Enduring Importance of Arthur Miller: The Price and The Hook
By Andy Piascik
July 29, 2017
CounterCurrents 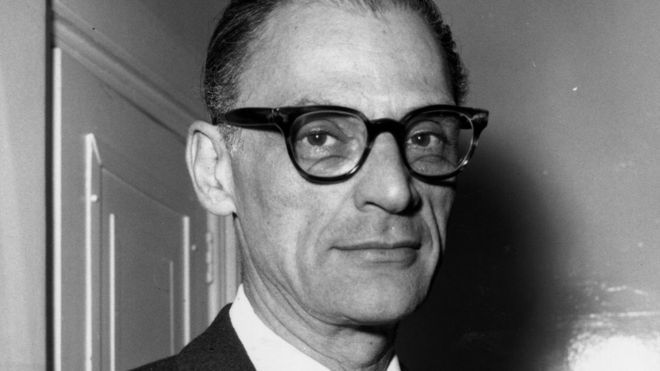 Seventy years after his initial Broadway success with All My Sons and 12 years after his death, Arthur Miller continues to cast a long shadow over theater in the United States. His plays are staples of high school drama clubs, college and university theater departments and regional theaters around the country, and his best-known works – Death of a Salesman, The Crucible, All My Sons, A View From the Bridge and After the Fall – have been revived many times on Broadway.
Miller’s influence also extends beyond the United States. Death of a Salesman, for example, serves as the backdrop to Iranian director Asghar Farhadi’s acclaimed 2016 film The Salesman. And it has been said, perhaps apocryphally, perhaps not, that The Crucible has played continuously somewhere in the world since its debut performance in 1953.
Hardly a New York theater season goes by without the revival of one of Miller’s plays. This summer, the esteemed Brooklyn Academy of Music features a revival of Salesman while earlier this year the Roundabout Theatre staged a three-month production of his1968 drama The Price. Among many attributes, the Roundabout production featured a stellar cast with Mark Ruffalo, Tony Shaloub, Jessica Hecht and Danny Devito as the play’s four characters. While not as well-known as any number of Miller’s works, The Price has been revived on Broadway more times – four – than all of his plays except The Crucible, which has also had four revivals over a significantly longer period of time.
Read full story here.
Video - Roger Waters calls out fellow musicians for refusing Israel cultural boycott 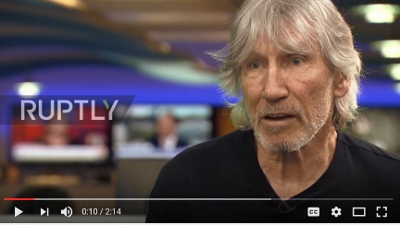 Listen here.
Pink Floyd co-founder and bassist Roger Waters called out fellow musicians for not adhering to the cultural boycott on Israel as part of the BDS movement for Palestinian rights in an interview in Washington DC, Wednesday.
Waters said Radiohead singer Thom Yorke was "wrong" for saying that playing in the country does not endorse the government. Waters went on to claim that any artist who chooses to play in Israeli is "making a public statement that they do endorse the policies of the government whatever they say, because that is what will be reported in Israel and that is what gets reported around the world."
Answering a question on why he doesn’t appear often on mainstream media or on popular late night TV shows, Rogers said "We're not quite sure but it comes from above. So you can figure it out for yourself, it's not rocket science."
The comments came after Radiohead refused to cancel a gig scheduled in Tel Aviv last month after supporters of the BDS movement asked the band to join the cultural boycott. Yorke explained the decision in a tweet, saying “playing in a country isn’t the same as endorsing its government.” He also tweeted "we’ve played in Israel for over 20 years through a succession of governments, some more liberal than others. As we have in America."
Published on Aug 9, 2017
Ruptly is an award-winning international news agency that provides real-time and archive visual news content to all media, from broadcast networks large and small to online content providers, including broadcast, digital and mobile platforms. Ruptly launched into full operation in April 2013 with the mission of becoming a competitive alternative to the status quo news agencies by delivering clients exclusive high impact and viral video, a varied selection of daily live feeds...
Ruptly GmbH
Lennestrasse 1
10785 Berlin
Germany
2nd annual Imagine This Women’s International Film Festival scheduled for November 4 - 5 in Brooklyn 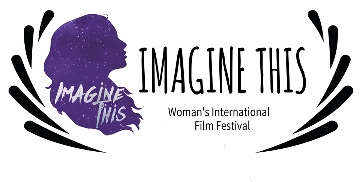 Imagine This Women’s International Film Festival announced today that it is raising funds via rewards on Kickstarter. The Film Festival is set out to raise $10,000 on Kickstarter to help cover the cost for the 2nd annual Imagine This Film Festival at the Wythe Hotel in Williamsburg, Brooklyn on November 4-5, 2017. ITWIFF has successfully made it through their first year, setting them apart from a list of other indie women’s international film festivals in New York City.
Mother and daughter duo Susie and Patrice Francois launched Imagine This Women’s International Film Festival (ITWIFF) with the aim to celebrate and empower independent and aspiring women filmmakers from around the world. ITWIFF held its first film festival at Brooklyn’s Wythe Hotel on November 12-13, 2016. The two-day event featured 29 shorts and 6 feature films from female storytellers across 15 countries, an Opening Night/Mixer and an Award Ceremony. Among the festival selections, 8 films made their international debut and 5 were shown in the US for the first time. A number of films touched on themes related to personal struggles within political and social conflicts across the world.
Submissions have recently closed for the 2017 ITWIFF as the festival has received over 200 films from 35 countries. “We’ve seen a tremendous response, and are quite frankly blown away by the quality of submissions we’ve seen,” said Patrice Francois, co-founder of ITWIFF.
“As aspiring filmmakers ourselves, we understood the obstacles that exist for new and up-and-coming filmmakers. We decided it was important to help cultivate an appreciation for a wide range of unique and compelling stories, especially those from women who have been traditionally underrepresented in film.”
According to a study by the Center for the Study of Women in Television and Film at San Diego State University, there remains a substantial gender disparity in the mainstream film industry, with female directors working on only 7% of the top 250 movies of 2014. The study showed that even among independent films at 23 film festivals from 2014-15, women made up only one-fourth of directors and directors, writers, producers, editors, and cinematographers.
“It’s clear that there is tremendous female filmmaking talent out there but there is still so much work to be done to create an inclusive environment that supports women storytellers,” said Susie Francois, co-founder of ITWIFF. “We hope that audiences from across New York will join us to experience these powerful stories from across the world.”
Imagine This Women’s International Film Festival is scheduled to launch a 45 day Kickstarter campaign on August 11th, 2017. The goal is to raise $10,000 to help fund the cost of their 2nd annual film festival. To support women and young women filmmakers and storytellers, visit ITWIFF Kickstarter campaign page.
About Imagine This Production
Imagine This Productions (ITP) is dedicated to providing aspiring women storytellers and filmmakers with a platform to encourage and develop new creative projects. ITP strives to support women by sharing their work with the public, promoting equal opportunities, encouraging professional development, and serving as a resource and information network.
To learn more about this Film Festival, please contact
Patrice Francois
Imagine This Production
845-477-5441
festival@imaginethisprods
Subscribe to Portside