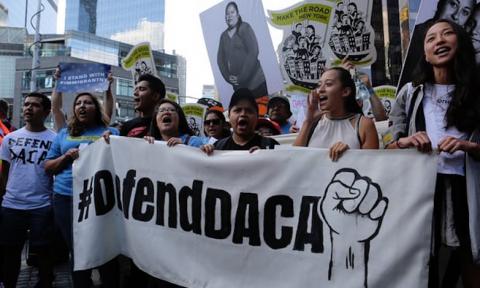 People demonstrate in favor of the Daca program at a rally in New York City. , Joe Penney/Reuters

Donald Trump thrust the fate of nearly 800,000 young, undocumented migrants into uncertainty on Tuesday by terminating the Obama-era program that protects the so-called Dreamers from deportation.

In response, Barack Obama said the decision was “self-defeating” and contrary to “basic decency”.

A “shadow has been cast over some of our best and brightest young people once again”, the former president said.

The 2012 policy known as Deferred Action for Childhood Arrivals (Daca) will be phased out by 5 March 2018, leaving Congress with six months to enact new protections for Dreamers through legislation.

New applications will no longer be accepted, while those currently in the program will all lose their status by March 2020, with the first permits expiring in March 2018 – unless Congress passes legislation allowing the young immigrants to stay.

“I do not favor punishing children, most of whom are now adults, for the actions of their parents,” Trump said in a written statement issued shortly after attorney general Jeff Sessions announced the policy. “But we must also recognize that we are nation of opportunity because we are a nation of laws.”

Trump, who later told reporters he had “great love” for Dreamers, said he had advised the Department of Homeland Security that Daca recipients were “not enforcement priorities [for deportation] unless they are criminals, are involved in criminal activity, or are members of a gang”.

And he called on Congress to act, saying he was providing US lawmakers with “a window of opportunity” to address the status of Dreamers. “Congress, get ready to do your job - DACA!” he tweeted earlier.

But the president stopped short of outlining what sort of legislation he would support to codify protections for Dreamers into law.

Sessions announced the administration’s decision in a statement delivered from the Department of Justice headquarters in Washington in which he said Daca was “being rescinded”. “To have a lawful system of immigration that serves the national interest,” Sessions said, “we cannot admit everyone who would like to come here. It’s just that simple.”

Trump’s move follows months of speculation over whether he would keep intact or tear apart the landmark executive action by Barack Obama that lifted the threat of deportation for migrants brought to the US before they were 16.

In a written statement published on social media that did not mention Trump by name, Obama denounced the decision as “self-defeating”.
“To target these young people is wrong – because they have done nothing wrong,” the former president said. “And it is cruel.”
“Ultimately, this is about basic decency. This is about whether we are a people who kick hopeful young strivers out of America, or whether we treat them the way we’d want our own kids to be treated. It’s about who we are as a people – and who we want to be.”

There are around 800,000 Daca recipients living in the US, who qualified by having been under the age of 31 as of 15 June 2012. Those applying were vetted for any criminal history or threat to national security and had to be students or have completed school or military service. Their status must be renewed every two years.

Sessions repeatedly referred to the group of young, undocumented immigrants as “illegal aliens” while declaring: “We are people of compassion ... But there’s nothing compassionate about the failure to enforce immigration laws.”

“This does not mean they are bad people or that our nation disrespects or demeans them in any way,” the attorney general, who took no questions from the assembled media, said of Dreamers. “It means we are properly enforcing our laws as Congress has passed them.”

Although Sessions did not provide a timeline for phasing out Daca, he noted that acting DHS secretary Elaine Duke had chosen “to initiate a wind-down process” in a bid to mitigate the immediate effects of the decision.

In a conference call with reporters on Tuesday, senior DHS officials said they would allow anyone with a Daca permit expiring between now and 5 March to apply for a two-year renewal, so long as the application is submitted by 5 October. But other Dreamers whose permits do not expire within the next six months would be poised to lose their status as early as 5 March, exposing them to the threat of deportation.

The administration also declared that new applications for Daca dated after 5 September will not be considered, shutting down access to the program for those who are not already beneficiaries.

The specifics of what legislation Trump would be willing to sign to protect Dreamers remained unclear. White House press secretary Sarah Huckabee Sanders suggested the president would not support a standalone bill to grant permanent legal status to Dreamers, telling reporters on Tuesday: “We can’t take just a one-piece fix. We’ve got to do an overall immigration reform that is responsible and is lawful.”

Instead, Sanders tied any White House support for a legislative fix for Daca to border security. “I don’t think the president has been shy about the fact that he wants a wall,” she said.

Trump’s decision was swiftly condemned by immigration advocates, business leaders and Democrats, while attorneys general from New York and Washington state said they would take legal action against the administration.

Many supporters of Daca pointed to the contributions of Dreamers – named after failed legislation in Congress – to their communities and economic prosperity, while noting the program already denied access to anyone who was convicted of a felony, significant misdemeanor, or deemed to be a threat to national security or public safety.

“This is a sad day for our country,” Facebook co-founder and CEO Mark Zuckerberg said in a statement.

“The decision to end Daca is not just wrong. It is particularly cruel to offer young people the American Dream, encourage them to come out of the shadows and trust our government, and then punish them for it.”

“The president’s cruel and heartless decision to start deporting Dreamers in six months demands an immediate response from the Republican Congress,” she said.
Republican House speaker Paul Ryan, who in recent days expressed his hope that Trump would not terminate Daca, responded to Tuesday’s announcement by characterizing Obama’s policy as “well-intentioned” but “a clear abuse of executive authority [and] an attempt to create law out of thin air”.

“Congress writes laws, not the president, and ending this program fulfills a promise that President Trump made to restore the proper role of the executive and legislative branches,” Ryan said in a statement.

The House speaker nonetheless said it was important for Daca recipients to “have clarity” on how they would be affected in the phase-out period, while calling on Congress to act.

“It is my hope that the House and Senate, with the president’s leadership, will be able to find consensus on a permanent legislative solution that includes ensuring that those who have done nothing wrong can still contribute as a valued part of this great country,” Ryan said.

The highly partisan atmosphere in Congress will make the passage of any legislation to protect Dreamers an uphill battle. Democrats are near uniform in their support of the Dream Act, which seeks to provide Dreamers with a path to permanent residency, but previous iterations of the bill have fallen in the face of steep opposition from conservatives.

Democrats were scathing in their assessment of Trump’s decision to upend Daca without providing a legislative solution.

“It takes someone with a dark heart to do something as cruel and pointless as this,” Senator Chris Murphy, a Democrat from Connecticut.

US lawmakers, who returned to Washington on Tuesday after the August recess, already face a series of pressing fiscal deadlines in the coming weeks that include averting a government shutdown and securing emergency funding to deal with the aftermath of Hurricane Harvey.

Trump’s decision to throw the vexing issue of immigration into the mix not only complicates a packed legislative agenda, but also raises the stakes ahead of the 2018 midterm elections. The president already shares a contentious rapport with Republicans in Congress, who might be reticent to cast politically thorny votes while fending off primary challenges from the right, where any pro-immigrant actions are viewed as “amnesty”.

Pressure had mounted on Trump to determine the fate of Daca. Activists on the right bemoaned the president’s failure to immediately rescind it.

In an attempt to force a decision, 10 state attorneys general, led by Ken Paxton of Texas, imposed an arbitrary deadline of 5 September on which they threatened to take the administration to court. One of those attorneys general, Tennessee’s Herbert Slatery III, backed away from the threat last week.

Immigration advocates intensified their campaign to keep Daca intact while directing their pleas to Republicans in Congress. Youth groups launched a hunger strike in the Wisconsin congressional district represented by House speaker Paul Ryan, calling for legislation to make the status of Dreamers permanent.