Colin Kaepernick, the former quarterback of the San Francisco 49ers, is being blackballed — itself a revealing phrase — from the National Football League with the collusion of the all-white owners. He is ostracized because a year ago he exercised his First Amendment right to free speech by taking a knee during the playing of the national anthem, as a symbol of protest against police shootings of unarmed African-American men. 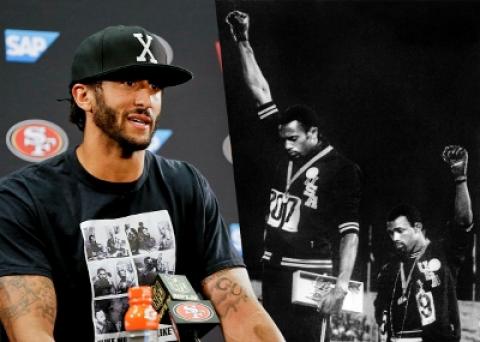 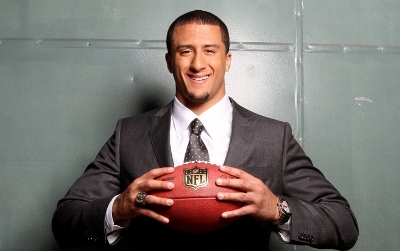 Colin Kaepernick is inspiring a discussion about race and the NFL in Los Angeles.
credit: San Francisco 49ers/NFL  Weekly
Colin Kaepernick is the former San Francisco 49ers quarterback who last year took a knee during the national anthem as a symbol of protest against police shootings of unarmed African-American men.
Now demonstrators plan to take a knee in the street to block traffic outside Los Angeles Memorial Coliseum as the Rams gear up for their season opener Sunday against the Indianapolis Colts. Protest leader Najee Ali, head of the local chapter of Rev. Al Sharpton's National Action Network, describes the planned action as "civil disobedience" in defiance of a league that many believe is blacklisting a still-unsigned Kaepernick for his stance.
"We plan on impeding traffic and the fans' ability to watch the game on time," he says. "Without question, there's no way we can allow the Rams and the NFL to carry on as if this is business as usual. They've shown no concern about the killings of people of color nationwide by police."
As calls for the NFL to find a job for Kaepernick have grown louder during the preseason, the league has generally remained silent, and representatives have not responded to our past requests for comment. However, after Seattle Seahawks defensive end Michael Bennett recently accused Las Vegas cops of racial profiling during an incident captured on video last month, NFL commissioner Roger Goodell yesterday released a statement.
"We support Michael and all NFL players in promoting mutual respect between law enforcement and the communities they loyally serve and fair and equal treatment under the law," he said.
Meanwhile, with the preseason over, Kaepernick backers have lost hope that he'll be signed this year. But they say the lack of a job for the player will only solidify ongoing protests against the league. Ali and the local National Action Network instituted a boycott of Rams and Chargers games. And now some civil rights leaders are putting a spotlight on front-office diversity hiring, or lack thereof.
"Kaepernick is the one who tried to shine a light on our people being slaughtered in the streets unjustly and he's
being punished," Ali says. "We're willing to fight this fight all the way."
Demonstrators, including members of Project Islamic Hope, the Southern Christian Leadership Conference and the L.A. Urban Policy Roundtable, are also requesting a meeting with Rams owner Stan Kroenke "to discuss his commitment to African-American and Latino social issues," according to a statement.
We reached out to multiple Los Angeles Police Department officials, none of whom was aware of the planned, 11 a.m.-to-noon demonstration at 39th and Figueroa streets outside the main parking entrance to the Coliseum. Ali said he plans to meet with officers tomorrow to explain that demonstrators will not resist arrest.
"We just want to practice our First Amendment rights peacefully, in a nonviolent fashion — in a manner that Kaepernick did," he says. "I'm willing to be arrested."
[L.A. Weekly staff writer Dennis Romero has worked on staff at several magazines and newspapers, including the Philadelphia Inquirer and the Los Angeles Times, where he participated in Pulitzer Prize-winning coverage of the L.A. riots. His work has appeared in Rolling Stone online, the Guardian, and, as a young stringer, the New York Times.]