Retail work does not have to pay poverty wages. New study compares work in Europe and the U.S. For all the power of market forces, from automation taking over routine tasks to globalization squeezing retailers’ margins, there is nothing inevitable about low-quality retail jobs. Social norms and political institutions can make them better, or worse. 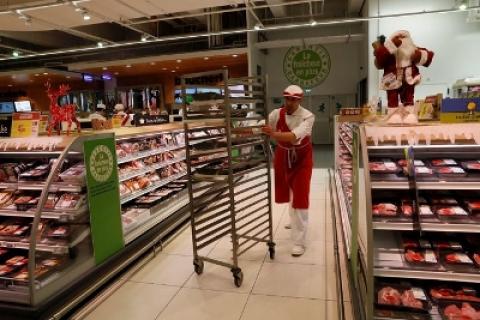 An employee in the meat section of a Carrefour supermarket near Paris. The high minimum wage in France is crucial in bolstering pay among retail workers., Credit: Thomas Samson/Agence France-Presse // New York Times

Bethamy Magrow is grateful that the minimum wage in New York City is rising to $13 at the end of next month. Earning the current minimum of $11 an hour at a Times Square fashion retailer and scheduled to work some weeks for only 19 hours, the 25-year-old sales worker realizes she doesn’t quite clear New York’s poverty line.

It would be nice if her schedule didn’t change so much from week to week, she told me, so she could set up her doctors’ appointments in advance. But at least New York bars retailers from changing the schedule from one day to the next. In any case, jobs she has had at Whole Foods and Pokéworks, a restaurant on Union Square, were no better or worse.

Millions of Americans have similar stories to tell. For all the talk about the “end of retail,” it is one of the largest employers in the country, accounting for about one in eight workers in the private sector. For every miner toiling in the United States, there are almost 25 retail workers. Manufacturing, the apple of President Trump’s eye, doesn’t employ nearly as many.

Typically paying full-time employees less than $33,000 a year, well below the midpoint across the economy, retail jobs have become the work of the lower class, the main source of support for Americans left behind by economic change.

This raises a fairly urgent question: If retail work sets the living standard for so many low-income families, why doesn’t it get more attention?

A survey of 1,100 retail workers published this month by the Center for Popular Democracy, a liberal-leaning advocacy group, found that only one in about 12 front-line retail workers were in jobs considered of high quality — meaning that they were employed full time, were paid at least $15 an hour and were offered health insurance and at least one form of paid leave. One in three had not gotten a raise in the last two years. Almost half had received some form of government assistance in the previous year.

Perhaps policymakers believe that undesirable sales jobs are inevitable features of the economic landscape; that the lot of poorly paid cashiers results from powerful market forces like automation and globalization over which they have little control. The truth is that retail work doesn’t have to be so unpleasant. A quick look around Europe underscores that retailers can profit, even thrive, and still provide their workers a better deal.

This is the proposition of “Where Bad Jobs Are Better,” a study published last month by the Russell Sage Foundation. The authors — the labor experts Françoise Carré of the University of Massachusetts, Boston, and Chris Tilly of the University of California, Los Angeles — explored the wages and working conditions of retail workers in Germany, Britain and other industrialized nations.

They concluded that for all the power of market forces, from automation taking over routine tasks to globalization squeezing retailers’ margins, there is nothing inevitable about low-quality retail jobs. Social norms and political institutions can make them better, or worse.

What accounts for these differences? The high minimum wage in France — set at 68 percent of the median wage — is a critical tool preventing low pay among retail workers. Cashiers, near the bottom rung on the wage ladder, made more than $2 more per hour at big food retailers in France like Carrefour than at similar American retailers like Walmart. 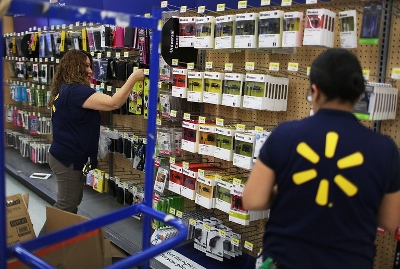 Unions, of course, play a major role. Fewer than 5 percent of retail workers in the United States are represented by a union. In Denmark, France, the Netherlands and Germany, by contrast, multi-employer union agreements determine wages and working conditions across regions in the entire sector. Notably, retailers in Germany, Denmark and the Netherlands have to negotiate scheduling with unions and often must post schedules weeks in advance.

Other institutions matter. In the United States, part-time retail workers earn two-thirds of the hourly wage of full-timers. In the European Union, they must be paid the same. Premium pay for late-night and weekend shifts in Europe also improve pay. Universal child care — common in countries like France — also affects the labor supply, freeing mothers to seek full-time work. Germany’s apprenticeship system provides retailers with workers who have more skills and can take on a greater variety of tasks.

These things tend to come together. When I asked what change would most improve the lives of retail workers in the United States, Professor Carré said the minimum wage, mandated or subsidized health care and mandated sick days made a big difference. Still, she argued, “you don’t get those things without a strong labor movement.”

This is not to say that retail jobs are great in France or the Netherlands. Indeed, Professors Carré and Tilly find that these jobs are gradually getting worse everywhere, as European retailers seek workarounds to avoid labor regulations. But while wages and working conditions have steadily deteriorated in the United States, the decline in Europe hasn’t been as general.

And what is critical is that European retailers can afford this: the researchers found that large food stores in France sell about twice as much per hour as American stores. Value added per employee is about 12 percent higher. And French stores sell about three times as much per square foot, not least because of tight zoning regulations that limit their size.

This is not to say that European culture is somehow more labor-friendly. Professors Carré and Tilly observe that when European retailers come to the United States, they tend to adopt American norms.

Europe’s choices do entail costs. Notably, American consumers benefit from the more intense competition among retailers in the United States. In areas with weak zoning regulations, where Walmart can easily enter and undercut other retailers’ prices, this is particularly true. In France, where barriers to entry are high, competition is weaker and retailers are more profitable. They can afford to give workers a better deal.

Still, it is important to understand that this is a choice. There is nothing inevitable about dead-end jobs. As the United States struggles with stagnating wages and widening inequality, giving bottom-end workers a better deal might not be a bad choice — and $13 an hour is one place to start.

[Eduardo Porter writes the Economic Scene column for The New York Times. Formerly he was a  member of The Times’ editorial board, where he wrote about business, economics, and a mix of other matters.

Mr. Porter began his career in journalism over two decades ago as a financial reporter for Notimex, a Mexican news agency, in Mexico City. He was deployed as a correspondent to Tokyo and London, and in 1996 he moved to São Paulo, Brazil, as editor of América Economía, a business magazine. In 2000, Mr. Porter went to work at The Wall Street Journal in Los Angeles to cover the growing Hispanic population. He joined The New York Times in 2004 to cover economics. Mr. Porter was born in Phoenix and grew up in the United States, Mexico and Belgium.]