film Review: When Karl Marx Was Young And Dashing

Raoul Peck’s The Young Karl Marx is the best buddy movie since George Roy Hill’s Butch Cassidy and the Sundance Kid in 1969. It’s also among the most important films in decades, bringing to a mass audience not just the revolutionary ideas of Marx and his friend and collaborator Frederick Engels in the early days of modern capitalism, but an approach to politics and history that still has no peer. 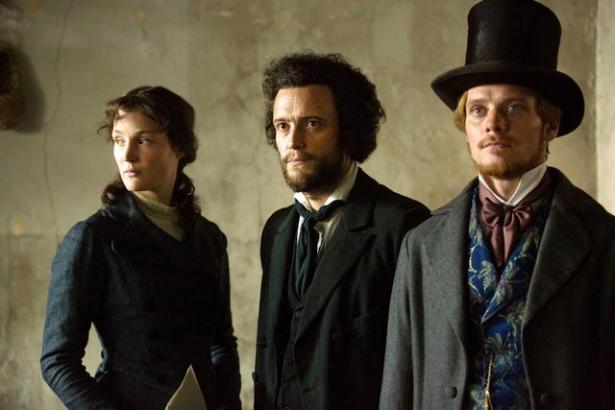 Charting the world as he saw it, Marx wrote: “Accumulation of wealth at one pole is at the same time accumulation of misery, agony of toil, slavery, ignorance, brutality, mental degradation, at the opposite pole.” Has anything changed?

The film is the story of two young men, beginning in 1844 when they challenged not only leading thinkers of the academy but radicals abstracted from real struggles. It ends with the publication of the Communist Manifesto in 1848 when neither of the authors was yet 30 years old.

Heavily influenced by the German philosophers Georg W.F. Hegel and Ludwig Feuerbach, the duo created not just a philosophy but a politics. They took from Hegel the idea of the dialectic as a clash of opposites leading to a synthesis and applied it to institutions and movements as a framework for action through understanding power and powerlessness. From Feuerbach, they adopted how reality was materially based, though reliant on human will and sensuous activity, not as abstractions as Feuerbach had it.

“Philosophers have hitherto only interpreted the world in various ways; the point is to change it,” Marx wrote in his concluding Thesis on Feuerbach. Unlike the era’s utopian socialists, Marx and Engels based their politics on a reading of economic relations in which the state and politics do not determine the economy. Rather it is the relations of production that determine the state and its politics.

The film’s craft is nonpareil and it vividly portrays an aggrieved class and a parasitic caste of exploiters.

Engels, in his magisterial The Condition of the Working Class in England, written in 1845 while working in Manchester as a clerk for his father’s cotton-spinning factory, saw first-hand the contradictions inherent in what was then the world’s most industrialized nation. A national economy dependent on trade could go into crisis with the first bump of a business downturn, with half its population even in good times “unpropertied, absolutely poor people, a class which lives from hand to mouth, which multiplies rapidly.”

Poverty in this perverted system was treated as criminal, with Engels noting that paupers were consigned to either prison or penal colonies, offering the keepers of the state “the satisfaction of having converted people without work into people without morals.” Who could blame them, Engels wrote, “if the men have recourse to robbery or burglary, the women to theft and prostitution.” If a revolution came, he believed, it would be based on material interest, not — or not just — on principles. It would be a social upheaval, not simply a political reaction.

The film’s treatment of factory worker Mary Burns, Engels’ longtime lover and part of the group that helped him investigate conditions among Manchester’s poor, is a pleasant surprise. While it posits Burns as a dissident worker at his father’s factory — something there’s no known evidence she was — it presents her as a self-directed militant at a time when women in the workforce were invisible to scholars and journalists. It also counters the usual treatment of Burns, who historians often either ignore or mention in a risqué manner, given that she and Engels were never married.

Peck, who also directed the I Am Not Your Negro documentary profiling James Baldwin, has said he did not want to create a period piece. “The goal was to concentrate on recreating an atmosphere,” he told a press conference. “The feverish reality of an era — to better immerse the audience in 1840s Europe: the harshness of English factories, the extreme destitution and filth of Manchester streets (comparable to a shanty town), the gilded warmth of Parisian interiors (luxurious residences, libraries, etc.) and the energy of youth eager to change the world, all combined to illustrate the early years of gaping inequalities.”

Does he pull it off? Yes and no. The film’s craft is nonpareil and it vividly portrays an aggrieved class and a parasitic caste of exploiters. But is it is possible to understand Marxism and the deep contribution Marx and Engels made to economic thinking and revolutionary politics from a two-hour movie? Too little is elaborated on to make the film a solid pedagogical tool.

“From the outset, I decided to make a film that would speak to the widest audience, without distorting historical truth,” Peck insists. He keeps his word: There is no distortion, although there is one factual flub. The film says that Marx, assigned to write the Communist League’s manifesto in the fall of 1847 to make its ideas compact and plain for the insurgent movements emerging throughout Europe, missed his January 1848 deadline because he was busy with assignments for Horace Greeley’s New York Tribune. Marx actually didn’t begin writing for the Tribune until 1851. With help from Engels, the Communist Manifesto was delivered in February 1848; the rest is history.

Also, did the film really need Bob Dylan’s nasal “Like a Rolling Stone” to accompany the closing credits? The tune isn’t about the working class, let alone fighting back. Kicky musically, but a strange choice.

Absent these caveats, the film is a must-see.

[Michael Hirsch is a longtime labor and political writer. A member of the National Writers Union and a staff writer with the United Federation of Teachers for 13 years until retiring in 2013, he has also worked in communications for three other unions, served on the executive boards of one more and taught sociology and labor education in Massachusetts, Indiana and New York. A former steelworker (in Indiana), his writing has appeared in The New Statesman, Crain's NY Business, The Village Voice, NY Observer, New Politics, Labor Notes, Jacobin,  Logos, City Limits, The Guardian, Working USA, Jacobin, New Labor Forum and other venues. He also reviews books for The Indypendent, many of which have been featured on Portside.  He is on the editorial boards of New Politics and Democratic Left (DSA), and is one of the Portside Culture books moderators.]