Considered Ireland's key revolutionary, James Connolly was active in workers' movements in the United States, Scotland and Ireland. This collection reflects his struggles for an Ireland and a world free from militarism, injustice, and deprivation. 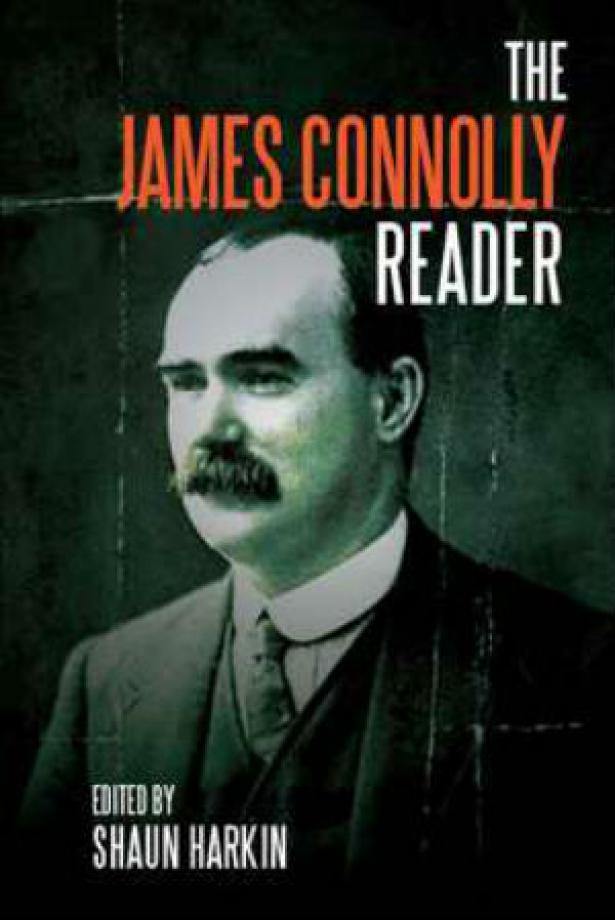 There are a lot of books about James Connolly, still, 150 years after his birth and just over a century since his death, one of the most significant and influential figures in the history of the labour movement on either side of the Atlantic. Unfortunately, many tend to be quite partial and serve more to try and make Connolly’s memory serve the political agenda of the author, rather than illuminate the actual thinking of the man. This is a chequered genre, the absolutely nadir of which was definitely Sean O’Callaghan’s infamous hatchet-job (with a forward by Bob Geldof!) that was rushed out as an anti-Easter Rising release two years ago. For a handy alternative to this sort of thing, Haymarket books have brought out this paperback that will make an extremely good starting point for anyone who wants to know more about his real thoughts and beliefs.

The book opens up with a potted history of Connolly’s life. It’s no detailed biography, and it isn’t intended to be, but it’s a fine starting point and more importantly provides context for the range of articles and pamphlets that make up the bulk of the book. Shaun Harkin has arranged a diverse collection of writings that are roughly chronological, but more importantly work as a guide to the political arguments that their author was engaged in through a career that was busy by any standard. The range of topics is consequently broad: socialism and trades unionism, war and imperialism, nationalism, religion and the oppression of women all feature extensively.

Early entries deal in particular with Connolly’s thinking on the Irish national liberation struggle, and it has to be said that a few more socialists in the early twenty-first century might well benefit from reading them. His measured critique of some of his key rivals is a case in point:

‘...Sinn Féin, or in English, Ourselves. It is a good name and a good motto. The first essential for the success of any movement or party is that it should believe it carries within its own bosom all the material requisite to achieve its own destiny. The moment any organisation ceases to believe in the sufficiency of its own powers, the moment its membership begins to put trust in powers not their own, in that moment that party or that organization enters its decline. It has been so with Ireland, it is so with the nonsocialist working class’ (p.123).

Connolly absolutely recognised the reality of radical nationalism as a force that was committed to fighting imperialism, in contrast to ‘doctrinaire’ (we would probably now say ‘sectarian’) commentators on the left who advocated a fight for socialism that excluded a fight against imperialism, or that even conceded to its logic altogether. He did, however have his own critique of the limits of the nationalist approaches to fighting for liberation. For example, Sinn Féin’s calls for a return to Ireland's 1782 political system (which was a minority-rule parliament of mostly landlords, before being abolished for rule from London) was certainly an insufficient form of self-determination. Contrast Connolly’s clarity with the way many on the left tie themselves up in knots today trying to form coherent lines on the SNP, Catalonia or the Kurdish movements!

The two major works included here, in full, are the still-popular pamphlet Socialism Made Easy and the more scholarly work Labour in Irish History. The first of these two continues to stand up ridiculously well for what is essentially recruitment literature; indeed, its first half has scarcely aged at all. It runs through a series of basic arguments about arguments for and against socialism. You could not have been active on the left and never have had to argue these points. Is socialism a foreign plot? Is it against religion? Isn’t it stealing property from people who work hard? Even if you have had to deal with these sorts of objections in many ways, Connolly’s calm, undismissive answers to these common viewpoints would probably still convince many people today.

The second part of Socialism Made Easy is somewhat more of its time, as it is a direct argument to working people about how to organise and, well, what to do. Debates about craft unionism versus industrial trade unionism are generally not where our movement is at today, and the relationship of left parties to the trade unions has become much more complex (the Irish Labour Party was, in fact, not a distinct organisation from the Irish Trade Union Congress during Connolly’s lifetime).

Connolly was an advocate of a form of syndicalism during this time: this was the belief that the trade unions themselves, by organising and uniting the majority of workers, would form the basis of socialism. A hundred years on, few on the left would now agree that is how capitalism is likely to be replaced, but the explanation presented in the pamphlet remains interesting. It serves both as a history of real trade-union organising in the heyday of ‘new unionism’, as it was known then, and just a set of solid arguments about the balance of class forces in industry and wider society.

The history of Irish labour

Labour in Irish History has to be considered the centre-piece, though, and it is an absolute must-read for anyone on the left who wants to understand Ireland’s history of colonisation and resistance. The story begins with an ending: the final collapse of Gaelic Irish society at the hands of English imperialism in the seventeenth century, after hundreds of years of contention between the two. Connolly instantly acknowledges another pioneering writer and national-liberation advocate, Alice Stopford-Green, as having provided the first ‘modern historical science’ based account of the country, that enabled him to write about this period. She is just the first less well known, but important writer that he seeks to introduce to his readership. The fall of the Gaelic clans and associated systems of law and labour to a capitalism from overseas had created not just a disadvantaged country, Connolly argued, but meant that class struggle in Ireland had become inseparably linked to a struggle against colonialism:

‘… the result of the long drawn-out struggle of Ireland has been, so far, that the old chieftainry has disappeared, or, through its degenerate descendants, has made terms with iniquity, and become part and parcel of the supporters of the established order; the middle class, growing up the midst of national struggle … have now also bowed the knee to Baal, and have a thousand economic strings in the shape of investments binding them to English capitalism as against every sentimental or historic attachments drawing them toward Irish patriotism; only the Irish working class remain as the incorruptible inheritors of the fight for freedom in Ireland’ (p.193).

These dynamics are visible throughout the colonised world.

This analysis of the effect of imperial domination on class structure in Ireland is fleshed out with a discussion of how the country goes from being something the English fight over, rather than for, since the old Irish order is essentially eliminated, to the development of genuine modern liberation movements. First there develop peasant resistance forms, and these develop into political movements. Of course, Connolly wants to pay tribute to Theobald Wolfe Tone, amongst other nineteenth-century revolutionaries, but he also highlights another figure.

Despite his assertion that ‘the Irish are not philosophers as a rule; they proceed too rapidly from thought to action’ (p.249), he manages to find a philosopher in Ireland he considers a possible forerunner to Karl Marx: William Thompson (a utopian socialist who also co-wrote an important early feminist work). Thompson is just the first of a series of intriguing early radicals who experimented with anti-capitalist solutions to the country’s problems before the twentieth century. Coming across less well, in Connolly’s view, are bourgeois leaders like Daniel O’Connell, who he sees as having played a thoroughly contradictory role in half-leading popular and early working-class movements, to say nothing of having physically opposed revolutionaries like Tone, because of the former’s ultimate commitment to private property.

Writing for the moment

The later documents in the book are necessarily shorter, being more articles written amid the urgency of great events. During the Dublin Workers’ lock-out of 1913, Irish capitalists made a concerted effort to destroy industrial unionism, with the broad support of the Nationalists. The terrible outbreak of the First World War forced Connolly to focus on hard arguments about internationalism, as former comrades from socialist parties across Europe were reduced to killing each other for the sake of imperialists. All this, of course, leads to the events culminating in the Easter Rising of 1916, as Connolly and his comrades came to the conclusion that it was necessary to rebel against imperialism itself.

What is most striking about all of these articles, is that the author maintains a consistent and essential political focus on what is being fought for and why, that is rooted in a really thorough application of Marxist ideas to the political practice of the labour movement. It’s often remarked upon that it was in the time after he was executed by the British, as Ireland entered its struggle for independence in earnest, that the intelligence and leadership he would brought, was most sorely needed. We’ll never know what he might have been able to achieve if his life had been spared, but thanks to a useful compendium like this, we will always have the valuable contribution he did make to the cause of socialism and anti-imperialism.

Book editor Shaun Harkin is an activist and writer presently based in Derry City, Ireland. A member of the Ireland's People Before Profit Alliance, he is a regular contributor to the International Socialist Review (US) and Socialist Worker (Ireland).