The targeting of immigrants is intimately linked to a long record of labor repression and civil liberties violations — which eventually target the native-born, too. 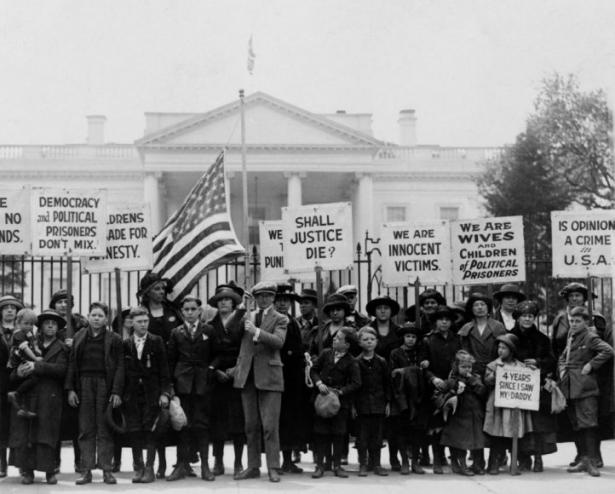 Family members of political prisoners protest outside the White House in 1922., Shutterstock

The Republican pre-election strategy of exploiting “the caravan” was irredeemably ugly.

It’s hard to say what was worse: the shameless and farcical framing of a helpless stream of people as a national security threat, or the president’s off-hand suggestion that these people might actually be funded by the prime villain of most anti-Semitic conspiracy theories: George Soros.

Few commentators have failed to point out the obvious effects of this gutter-politics playbook: the debasement of public discourse on immigration policy; the wink-and-nudge of encouragement offered to the most sinister fringes of the American far-right; or the aggravation of racial animosity against people of color in the United States.

Yet this country’s history also points to other, often overlooked tendencies. Politically, institutionally, and legally, the targeting of immigrants has almost always figured prominently in wider attacks on labor movements and civil liberties. To a large and alarming extent, it’s the same story today.

The story of American “nativism” is replete with contradictions and ironies.

The Protestants fled from the Catholics — and then oppressed them. The Irish and the Italians fled various forms of privation in Europe — and then fought to keep each other down in New York. West Coast politicians hated the Chinese and respected the Japanese in the late 19th century — and then reversed the equation in the 1930s and ‘40s. Mexicans were defined as “white” by the Census Bureau until 1930 — and now they’re a much-favored punching bag for white supremacists.

Almost everyone, at some point, has fought to keep someone else out. And Donald Trump is far from the first to realize that this impulse can cut across class lines: uniting the honest Midwestern auto worker with the duplicitous New York real estate developer — or, in another time, the president of the American Federation of Labor with the cynical Washington legislator.

But this is only part of the story. Indeed, some of the strongest moments in the history of the North American labor movement have been defined by cross-ethnic unity.

Notably, the rise of the Industrial Workers of the World (IWW) in the early 20th century followed an unprecedented wave of immigration throughout the previous four decades. This created a massive “sleeping giant” of unskilled urban and rural workers across the country, which the “Wobblies” — at least initially — were able to organize into a potent political force. From the textile mills of Lawrence, Massachusetts, to the copper mines of Bisbee, Arizona, the IWW put extreme pressure on the pillars of corporate power that had seemed so immovable since the Civil War.

The ability of the IWW to harness the collective strength of immigrant labor was not lost on its enemies in government. Particularly under the cover of World War I and the “Red Scare” of 1919-20, the Woodrow Wilson administration oversaw the summary deportation of around 250 “foreign radicals” and the detention of thousands more, while Congress soon passed legislation permitting the deportation of “aliens” who merely “sympathized” with revolutionary ideologies.

“Deportation,” William Preston puts it in Aliens and Dissenters, became “the first love of those who desired to rid the country of ‘isms’” — especially J. Edgar Hoover at the Bureau of Investigation and Anthony Caminetti at the Bureau of Immigration.

Today, we may not quite be in the same hysterical age as the “Red Scare,” but the similarities are hard to ignore. Rogue federal agencies using deportation as a political weapon; labor unions are facing a variety of attacks from all levels of government; and broad, class-based coalitions are inhibited by well-crafted elite demagoguery.

The targeting of immigrants isn’t carried out just for the fun of it, but it is intimately linked to a long and ignoble record of labor repression in the United States.

The Slippery Slope for Civil Liberties

Due process is so often the first casualty of these attacks on foreign “radicals.” Free speech isn’t far behind.

Just as Emma Goldman was deported for the “danger” posed by her anarchist beliefs, a long list of activists — mainly associated with pro-immigrant “Sanctuary” movements — have faced the same threat from Immigration and Customs Enforcement (ICE) in our time: Jean Montrevil and Ravi Ragbir in New York; Daniela Vargas in Mississippi; José Enrique Balcazar Sanchez and Zully Victoria Palacios Rodriguez in Vermont; and Maru Mora-Villalpando and Baltazar Aburto Gutierrez in Washington State.

Briefly strip away our instinctive “citizen-alien” distinctions and consider what’s happening here: People in the United States are non-violently challenging the actions of its government, and being met with not just official indifference, but hostile intimidation.

It would be awfully naïve to expect such repression to be confined to those without the protections of citizenship. It’s no coincidence that “Alien” and “Sedition” Acts often come in pairs, as in 1798, 1918, and 1940. The dismal, unceasing fact is that when we allow the government to chase down unruly foreigners with little to no regard for their civil liberty, a wider spiral of state-sponsored lawlessness is set in motion.

People like J. Edgar Hoover learned what they could get away with during their wild crusades against “alien subversion,” and later applied many of the same methods against their home-grown foes. Joseph McCarthy and Martin Dies first put small numbers of foreigners under the spotlight of their inquisition in search of “Un-American Activities,” but ended up ruining the careers of at least ten thousand people forever tarnished as “disloyal” by anonymous allegations and Kafkaesque public questioning.

This tendency of civil liberties violations to spread hasn’t eased with time — nor has it been confined within U.S. borders.

As Eric Ormsby points out in a recent Columbia Law Review article, the extra-legal Guantanamo Bay prison regime began not after 9/11, but as a detention center for Haitian asylum seekers in the 1990s. The victims of Hungary’s “emergency” legislation aimed at “deterring” asylum seekers from Syria have not just been the desperate exiles, but also Hungarian citizens whose homes can now be searched by police without a warrant if they are “suspected of harboring refugees.” The 2015 Australian Border Force Act promised to punish not just “boat people” seeking refuge in the sparsely populated continent nation, but also workers in offshore detention facilities wanting to share their stories with the media.

“As these policies have increased in terms of both volume and complexity, their impacts on human rights generally have grown,” Ormsby concludes. “There is little reason to assume that domestic civil liberties will necessarily escape unscathed.”

The Danger of Compromise

This is a gentle way of saying that the situation is urgent. Callous family separation and reckless troop deployments to the Southern border are signs of an emboldened administration unconstrained by the half-hearted complaints of Republicans in Congress.

The leaders of the Democrats — who have taken over the House of Representatives — are promising compromise and bipartisanship with the executive branch. This might be possible and desirable on a whole range of issues. But compromising on the rights of immigrants would amount to an astounding betrayal of their courage, commitment, and trust.

And, as history and common sense testify, it won’t just be immigrants who ultimately suffer.

Harry Blain is a PhD student in political science at the Graduate Center, CUNY (City University of New York).