theater The Play’s the Thing

New play, about Reconstruction. This was really a turning point in US history when America almost did the right thing. The South was writing new state constitutions and African Americans were getting elected to local and national offices. 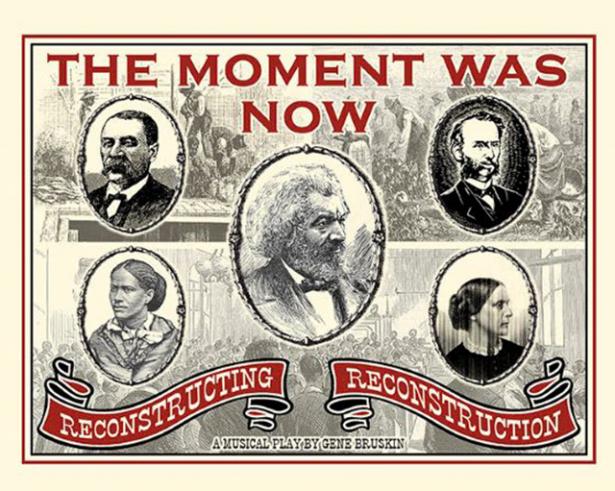 The Moment Was Now , Mike Konopacki

Peter O: Gene you have written a new musical play entitled “The Moment Was Now”, which takes place in 1869 in post civil war Baltimore. Can you give us a brief synopsis?

Gene: This was really a turning point in US history when America almost did the right thing. Under Reconstruction, instituted by Congress, the South was writing new state constitutions and African Americans were getting elected to local and national offices. Baltimore was a border state with a history of being half slave and half free. The play centers on the impassioned search for unity among dynamic leaders of powerful movements during this period. The conflicts and possibilities unfold at a fictional meeting convened by Frederick Douglass.

The echoes of the current moment are everywhere.

Peter O: William Sylvis, Susan B. Anthony, Isaac Myers and Frances Harper are your four protagonists, with Douglass sort of setting the stage. These are real historical characters. Can you tell us a little about each one of them? And how does Jay Gould fit in?

Gene: This is quite a remarkable group of people – all revolutionaries in their own way, but all with fatal flaws that become apparent in the course of the show. The conclusion of the civil war and the emergence of 4 million free African-Americans created a tremendous momentum for change, just as the civil rights movement of the 60’s in the US set the stage for the blossoming of the civil rights, women’s and gay liberation movements.

Of course Douglass is the legendary abolitionist and civil rights visionary, arguably the seminal figure of the 19th Century, along with Lincoln. Susan B Anthony is the most widely recognized among the others. She was an abolitionist, a suffragette and during this period, she began organizing women workers.

Isaac Myers organized a union of African American shipyard workers in 1866 in the same Baltimore shipyard where Douglass worked when he escaped. Myers went on with Douglass to found the [Colored] National Labor Union, which for a time had a national presence.

Frances Ellen Watkins Harper was an abolitionist, African American Feminist, teacher, and author, who spent years in the Reconstruction south.

Jay Gould, who lurks ominously in the background, was one of the early railroad kingpins who helped usher in the industrial revolution.

Peter O: Why is such a play relevant to today’s turbulent times?

Gene: This was a “moment” filled with opportunities and pitfalls, and unfortunately they were unable to build unity. They clashed around the issues of racism, sexism and class. Jay Gould, among others of his ilk, was able to take advantage of their divisions. This was a moment when the two-party system became consolidated and the white supremacy of the Klan was decisive in the retrenchment of the southern aristocracy.

We are at a moment now, again where white supremacy is central and there are massive movements from below and enormous wealth and power consolidating at the top. The two parties are in crisis. But moments come and moments go – clearly we must, as the saying goes, “seize the time.” This play has many lessons and we hope it both inspires and teaches, as well as entertains.

Peter O: Lin Manuel Miranda has achieved fame with “Hamilton”, and he has also been a strong advocate for the Puerto Rican people in the face of Trump’s attacks on the island and its inhabitants. Did his work inspire you to use the medium of a musical play?

Gene: “Hamilton” was a remarkable piece of musical theater and I have great respect for Miranda. It used spoken word, music and choreography to teach history. But it tells the story of a man who was in no way a revolutionary – in fact not even a progressive. It’s a story of the elite of that time, all slave owners. (Hamilton wasn’t personally but his wife came from a wealthy slave owning family) Although the characters are all actors of color, a statement in itself, there is barely a word about slavery. There are 46 songs but none about slavery.

After seeing the play I thought, wow, if music and spoken word can be used so powerfully to tell this somewhat traditional history, what if I used that format to tell the story of an exciting and relevant moment in history. “The Moment Was Now” is almost entirely in spoken word and musical format. After extensive research I was able to use the characters own words throughout, with some poetic license of course. These characters all knew each other but never met as a group. We have been assembling a talented group of actors and musicians with the help of my artistic director, Darryll Moch, and my music director, Glenn Pearson and it is coming to life.

Peter O: “Hamilton” has certainly been a blockbuster but is that cultural form the best way to reach labor audiences? What was your experience with your previous musical, “Pray for the Dead”?

Gene: I wrote “Pray for the Dead – a Musical Tale of Morgues, Moguls and Mutiny” in 2016 and it played for unions and community groups. People loved it because it talked about them, about class and power, with music and humor. At some shows the workers yelled out at the boss and behaved raucously during the show, more like they were in a union hall than at a theater. I loved it. “Moment” is also what I call “theater for the, 99%,” written for people who don’t normally go to theater. We are partnering with unions, women’s groups and others to fill the theater.

There is something about the immediacy of theater that is powerful and theater, particularly earlier in the 20th century, has a history in the US as a force for change. We intend to have audience discussions after each play -that worked very well with “Pray” – people want to talk about this stuff.

Successful movements need people’s culture – can you imagine the 60’s civil rights movement if there was no singing?

Peter O: You have a long and impressive 40 year plus career of labor and people’s justice organizing, why did you get the theater bug now?

Gene: I grew up in South Philly and my dad was a big fan of musicals – the records were always playing. I co-wrote some original plays for community theater in the 70s, But once I got involved in the labor movement I had to put it aside. After I retired, in addition to keeping one foot in the labor movement, I decided to give myself the gift of writing again and it’s been a great experience.

Peter O: Obviously producing such a musical play requires resources. How do you intend to get the funds necessary to produce such a musical?

Gene: That is a challenge. One other major difference between “Moment” and “Hamilton” is that our tickets will be very affordable – no $1,000 seats.

No big investors and in fact many foundations aren’t interested in so-called “political” plays. But we intend to pay our talented crew as fairly as possible. And there are many other costs involved. So we are scrambling.

Peter O: How can our readers help you to put on this important work?

Gene: The play will open in Baltimore on August 23rd and show for three weekends.

We have launched a Go Fund Me that makes it easy for folks to contribute.
They should go to: https://www.gofundme.com/the-moment-was-now

Also they can find us on Facebook at: “The Moment Was Now”

If someone wants to reach me directly they can email me at genebruskin@gmail.com

[Peter Olney is retired Organizing Director of the ILWU. He has been a labor organizer for 40 years in Massachusetts and California. He has worked for multiple unions before landing at the ILWU in 1997. For three years he was the Associate Director of the Institute for Labor and Employment at the University of California. View all posts by Peter Olney → https://stansburyforum.com/author/peter-olney]