The camps; New data on income and racism; Scabby is free speech; Language and misogyny; The new NIMBY; Democrats behind the curtain; Editorial cartoons are scary 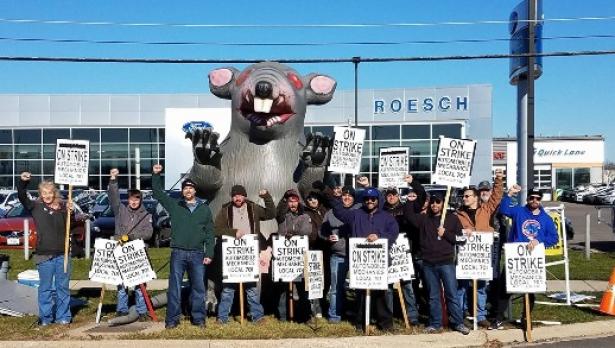 IAM Local 701 auto mechanics use Scabby the Rat to make their point in Bensenville, IL, Photo courtesy of Ryan Kelly of IAM Local 126.

‘Nothing Prepares You for the Inhumanity of It’

At a visit to Border Patrol facilities this week, the freshman congresswoman Madeleine Dean of Pennsylvania met weeping women and exchanged notes with detained children.

According to a recent study, white voters who support anti-racist policies generally have less income than their more racist peers.

By taking aim at an inflatable rodent, the NLRB invites a First Amendment challenge.

A Cultural History of Feminine Nouns Turned Into Insults

‘Slut’ and ‘hussy’ used to have tame meanings. Then, like so many other feminine nouns, they came to mean ‘prostitute’.

Liberals may set the pace in Democratic discourse and presidential debates. But on Capitol Hill, the centrists often take the wheel.

Why Editorial Cartoons are Endangered

One factor that may work against editorial cartooning is a diminished appreciation for pointed satire in this polarized era.