labor The Next Recession Will Destroy Millennials

Millennials are already in debt and without savings. After the next downturn, they’ll be in even bigger trouble. 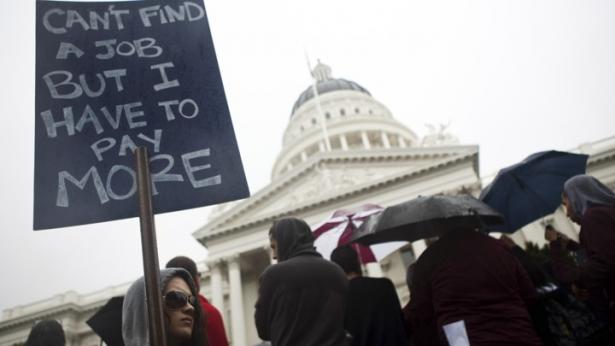 The trade war is dragging on. The yield curve is inverting. Investors are fleeing to safety. Global growth is slowing. The stock market is dipping. The Millennials are screwed.

Recessions are never good for anyone. A sputtering economy means miserable financial, emotional, and physical-health consequences for everyone from infants to retirees. But the next one—if it happens, when it starts happening—stands to hit this much-maligned generation particularly hard. For adults between the ages of 22 and 38, after all, the last recession never really ended.

Millennials got bodied in the downturn, have struggled in the recovery, and are now left more vulnerable than other, older age cohorts. As they pitch toward middle age, they are failing to make it to the middle class, and are likely to be the first generation in modern economic history to end up worse off than their parents. The next downturn might make sure of it, stalling their careers and sucking away their wages right as the Millennials enter their prime earning years.

It was the last downturn—the once-a-century Great Recession—that set them on this doddering economic course. The Millennials graduated into the worst jobs market in 80 years. That did not just mean a few years of high unemployment, or a couple years living in their parents’ basements. It meant a full decade of lost wages. The generation unlucky enough to enter the labor market in a recession suffers “significant” earnings losses that take years and years to rebound, studies show, something that hard data now back up. As of 2014, Millennial men were earning no more than Gen X men were when they were the same age, and 10 percent less than Baby Boomers—despite the economy being far bigger and the country far richer. Millennial women were earning less than Gen X women.

Kids of the 1980s and 1990s have had a new, huge, financially catastrophic demand on their meager post-recession earnings, too: a trillion dollars of educational debt. About a quarter of Gen Xers who went to college took out loans to do so, compared with half of Millennials. And Millennials ended up taking out double the amount that Gen Xers did. No wonder, given that the cost of tuition has gone up more than 100 percent since 2001, even after accounting for inflation.

The toxic combination of lower earnings and higher student-loan balances—combined with tight credit in the recovery years—has led to Millennials getting shut out of the housing market, and thus losing a seminal way to build wealth. The generation’s homeownership rate is a full 8 percentage points lower than that of the Gen Xers or the Baby Boomers when they were the same age; the median age of home-buyers has risen all the way to 46, the oldest it has been since the National Association of Realtors started keeping records four decades ago.

As a result, Millennials have not benefited from the dramatic rebound in housing prices that has occurred since the financial collapse and the foreclosure crisis. Millennials have also been forced to shell out hundreds of billions of dollars in rent as housing costs have skyrocketed in many urban areas. This represents a large generational transfer of wealth from the young to the old. Boomers own the houses and bar municipalities from building more of them, thus benefiting from rising prices and soaking up endless rent checks forked over by younger and poorer families.

Cost pressures have also made it difficult or impossible for Millennials to save or invest. The share of Americans under the age of 35 who own stocks has meandered down from 55 percent in 2001 to 37 percent in 2018, in part because employers are less likely to offer retirement-savings plans and in part because Millennials have nothing left over at the end of the month to put away. Virtually all members of the cohort are “not saving adequately,” experts warn, and two-thirds of Millennials have zero retirement savings. This means that Millennials have benefited not a bit from the decade-long boom in stock prices, as their parents and grandparents have.

Could the Millennials make up this lost ground? Perhaps, if wage growth suddenly and dramatically accelerates, urban cores start to build millions of new homes, and Congress announces a student-loan debt jubilee. But financial experts consider it unlikely. Millennials missed out on the big asset boom that occurred between 2010 and the present, and “appreciation is unlikely to be as rapid in the near future as it was during the recent period,” argue economists at the Federal Reserve. “With the baby boomers occupying most of the top jobs and much of the housing, Millennials are doing less well than their parents,” concluded Credit Suisse. “We expect only a minority of high achievers and those in high-demand sectors such as technology or finance to effectively overcome the ‘millennial disadvantage.’”

Annie Lowrey is a staff writer at The Atlantic, where she covers economic policy.