On this Labor Day, Trump Hits the Trifecta: His Stealth Move to Undermine Workers, Social Security, and Our Government

The long-term goals of Trump and his Congressional allies are to destroy the labor movement, wreck the federal government, and end Social Security. 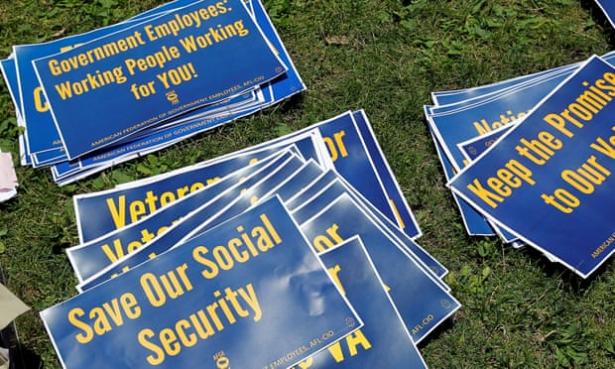 Signs on the ground during a rally of federal employees to protest proposed cuts in federal funding in Philadelphia, Pennsylvania, on 22 June 2017., Tom Mihalek/Reuters

Labor Day is a holiday designed to honor America’s workers. Instead, Donald Trump continues to attack them. Indeed, his administration is in the midst of a stealth effort that not only attacks workers but also our earned Social Security benefits and our federal government. The long-term goals of Trump and his Congressional allies are to destroy the labor movement, wreck the federal government, and end Social Security.

That may sound hyperbolic, but it is not. Trump’s latest stealth attack is not only anti-union, it will eventually make it so difficult to access Social Security benefits that some beneficiaries (particularly those attempting to qualify for their earned Social Security disability benefits) never receive them at all. Others will eventually claim their benefits, but only after an unnecessarily burdensome process of visiting field offices that are rarely open and have hours-long lines when they are.

For Republicans, that’s all according to plan. Trump and his Congressional allies are intentionally breaking our government so they can turn around and say that it doesn’t work.

Trump’s war on workers is extremely well documented. It is perhaps best illustrated by his anti-worker nominees to be Secretary of Labor, a pack of wolves in the hen house. The first nominee was guilty of scores of labor law violations and forced to pay millions of dollars in settlements to workers he cheated. He was ultimately rejected because even many Republicans decided that they couldn’t vote for an ethically challenged nominee who was also an accused domestic abuser.

Trump’s second anti-worker nominee was Alex Acosta, best known for his sweetheart deal with the billionaire pedophile Jeffrey Epstein. His current acting Secretary of Labor is, if anything, more anti-worker than the first two. And his newest nominee for the job has spent his career defending businesses seeking to roll back labor protections.

Trump’s war on the federal government is also well-documented. His administration is upending the lives of career civil servants by telling those based in Washington to move to the Midwest and those based around the country to relocate to Washington. Just before the beginning of the school year, these workers have been given virtually no time to decide if they will relocate or resign. This is having the desired effect: Most are quitting.

The Trump Administration’s actions are intended to shrink government to the size where they can, in the words of Republican activist Grover Norquist, “drown it in the bathtub.”

Trump’s hostility to Social Security and Medicare is equally clear. He recently floated a proposal to reduce Social Security’s funding. Days later, he gloated over his intentions to cut Medicare as a “fun second-term project.”

The American people did not vote for these benefit cuts. In fact, Trump ran on a promise to protect Social Security and Medicare. This was a shrewd political strategy, given that voters of all political stripes strongly value our Social Security and strongly oppose cutting its modest but vital benefits. They strongly value our Medicare, as well. But as with his promise to raise taxes on the rich, to provide quality health care for everyone, even to act presidential, Trump has done the exact opposite now that he’s in the White House.

Yet because Social Security and Medicare are so popular, Republicans know that direct benefit cuts will be impossible to pass into law, as long as all of us pay attention. That is why Trump and his Congressional allies are conducting a stealth war, using guerilla warfare tactics against our earned benefits.

One of their most nefarious tactics is undercutting the Social Security Administration (SSA), the agency charged with ensuring that workers receive their earned Social Security benefits in a timely and stress-free manner. SSA has suffered nearly a decade of budget cuts from Congressional Republicans. These cuts have resulted in office closures, staff reductions, and a years-long wait for disability hearings.

Attacks on SSA don’t just hurt the agency and its 60,000 workers. They hurt all Americans by making it increasingly difficult to collect the Social Security benefits we earn with every paycheck. That’s why all of us should fight to defend it.

At SSA and across the federal government, the Trump Administration is playing hardball. It has issued anti-worker executive orders. It has failed to negotiate in good faith with those representing federal workers. And recently, the Trump administration launched a new assault. It arbitrarily and unilaterally sought to impose a new contract on SSA workers. That imposed contract would effectively destroy the ability of the workers’ union to represent them.

The Trump Administration’s goal is to make conditions at SSA so intolerable that demoralized workers will quit in droves, taking essential institutional knowledge with them. This will directly affect the hundreds of millions of us who call SSA or visit a local field office regarding our earned Social Security benefits.

Federal workers are fighting back in the courts. Their Democratic allies in Congress are seeking to come to their aid, but they do not control the White House and Senate. The only way to protect the hard-working civil servants at the Social Security Administration, and thereby protect our Social Security and Medicare, is to make Donald Trump a one-term president.