labor Yup, Trump Did Scam Us

Apart from filling corporate coffers and the pocketbooks of the 1 percent, the $1.9 trillion cut has put the federal government in a financial straightjacket. 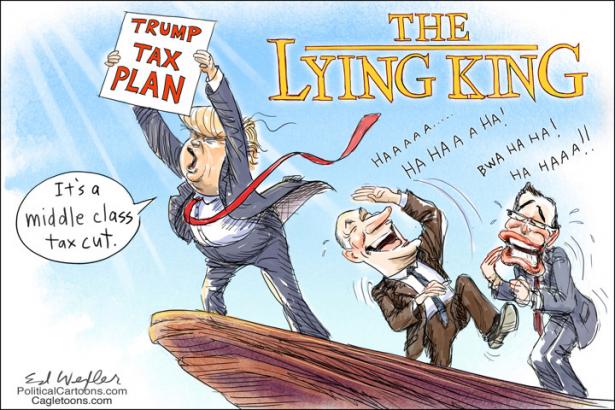 The evidence keeps growing that President Trump’s tax overhaul was little more than a gift to Corporate America and the 1 percent at the expense of the middle class.

What’s more, with economists predicting we are headed into a recession, it’s quite apparent the president’s promise that his massive tax cuts would turbo-charge the economy has proved bogus.

The typical American family didn’t come close to receiving the $4,000 in tax savings promised by Trump. Ordinary taxpayers got a $1,000 cut but then basically lost it to inflation.

The president also suggested that wages would pick up as a result of the tax cuts. That didn’t happen either.

In 2018, real wages did increase. But they grew more slowly than the economy.

Adjusted for inflation, the wage growth amounted to 2.0 percent. But for ordinary workers (“production and nonsupervisory workers,” as classified by the government), the wage growth was lower than that–1.2 percent.

Deepening the Wealth and Income Divide

Thus, the tax plan has plan has done virtually nothing to reverse the decades-long shift of income from working families to the rich in spite of rising productivity.

So, the Tax Cuts and Jobs Act of 2017 deepened the U.S wealth and income divide. Our trickle-up economy continues to become more polarized as the middle class hollows out.

The tax doubled what the wealthy can transfer to their heirs without triggering the estate tax to $11 million for children and $22 million for married couples.
Remember those promised bonuses?

The Trump administration suggested that our generous employers would share their tax savings with their employees. Well, the widespread distribution of significant bonuses didn’t happen. In our economy of 157 million workers, the average bonus came to a paltry $28, according to Americans for Tax Fairness.

As far as its impact on the economy, the tax law has turned out to be a dud.
A Congressional Research Service report released in May concludes that the tax plan had “a relatively small (if any) first-year effect on the economy.”

The economic growth rate did increase from 2.2 percent in 2017 to 2.9 percent in 2018. But the increase was much lower than what Trump claimed would happen.

Early this year, the national Association for Business Economics released the findings of a survey about how corporate economists viewed the tax cuts.
Eighty-five percent of the economists reported that the tax cuts “have not caused their firms to change hiring or investment plans.

“The economic benefits of the Tax Cuts and Jobs Act seem to have petered out,” a Tax Policy Center report said in August. “The economy’s strength now seems to lie almost entirely with consumer spending.”

Rather than pouring their huge tax savings into the economy, companies opted instead for a buyback bonanza to enrich corporate chiefs and shareholders. Buybacks hit a record $1.1 trillion in 2018.

“Corporations have used their tax windfalls to line the pockets of their rich executives, not to increase wages for their workers,” Democratic National Committee Chair Tom Perez said in August. “Meanwhile workers at places like Harley-Davidson are losing their jobs.”

As for the repatriation of profits that the administration predicted would follow the tax cuts, corporations have apparently generally chosen to continue to park those estimated $2.6 trillion to $4 trillion in accumulated earnings in tax havens outside the United States. Shortly after the Trump tax law went into effect, a Federal Reserve Bank study found “no obvious spike in investment” by the 15 companies that account for most of the profits deposited abroad.

The tax plan lowered the corporate tax rate from 35 percent to 21 percent. Over a decade, the projected savings for corporations will be $1.35 trillion, according to the Joint Committee on Taxation, which reports to the Senate and House finance and budget committees.

All told, the tax cuts will add an estimated $1 trillion to the deficit by 2022, according to the non-partisan Congressional Budget Office. Meanwhile, the number of companies paying zero taxes doubled in 2018, according to the Institute on Taxation and Economic Policy, a Washington, D.C.-based think tank.

The 31 percent drop in corporate tax revenues registered by the U.S. Treasury in 2018 is far larger than expected. A report by the Institute on Taxation and Economic Policy called the reduction “a more precipitous decline than in any year of normal economic growth in U.S. history.”

So, apart from filling corporate coffers and the pocketbooks of the 1 percent, the $1.9 trillion cut has put the federal government in a financial straightjacket.

Take a look at what, according to the Center American Progress, the lost revenue could pay for:

• the elimination of childhood poverty

• a doubling of the federal investment in climate science

Government is being starved.

Quite clearly, the Tax Cuts and Jobs Act of 2017 is about more than giving handouts corporations and the wealthy.

Today, it is ever so evident that–as critics contended from the beginning—anti-government Republican legislators concocted the tax scheme in part as a Trojan Horse for gutting Social Security, Medicare and Medicaid.

In November 2020, the agenda is clear for voters who care about those programs and economic fairness: They must unite to vote out Trump and the other politicians who are turning our country into an authoritarian plutocracy.