In this interview, Horne describes the role of racism in the development of jazz, the gulf between its domestic and international reception; and why creativity, improvisation and technical mastery were a means of survival for its performers. 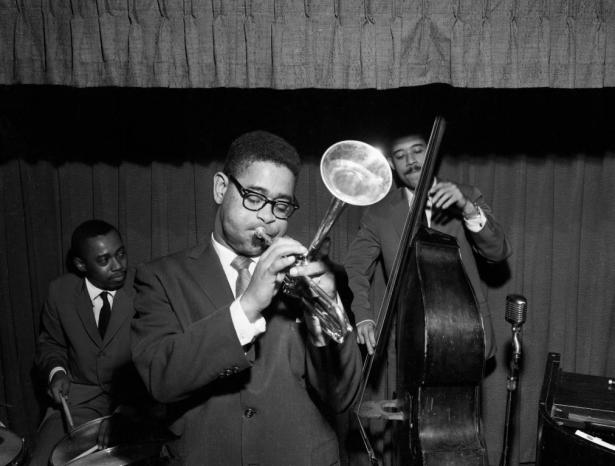 Musical innovations from musicians such as Dizzy Gillespie (here in 1955) like "be-bop" in the 1940s were driven by material forces, including the aim to develop musical forms that would be difficult for pale imitators to emulate., credit: Bettmann / Getty Images // Truthout

Dodging violent attacks by racist and drunken “fans,” resisting pressure from drug-peddling bosses and inhaling smoke for hours in dank clubs comprised the “common plight” of jazz musicians in the early 20th century, says historian Gerald Horne, author of Jazz and Justice: Racism and the Political Economy of the Music. In this interview with Truthout,Horne describes the role of racism in the development of jazz, the gulf between its domestic and international reception; and why creativity, improvisation and technical mastery were a means of survival for its performers.

Anton Woronczuk: Can you imagine a more dangerous profession than being a jazz musician in the United States during the 20th century?

Gerald Horne: Certainly, being a “jazz” musician in the first decades of the 20th century was probably the most dangerous profession in the arts and, along with coal mining, one of the most dangerous jobs of all. Inhaling cigarette smoke in dank clubs, being plied with alcohol and other controlled substances by unscrupulous bosses of clubs and record labels alike, being attacked violently by racist “fans” — all this and worse was part of the common plight of these artists.

Jazz and Justice looks at the history of jazz by understanding musicians as workers. What does this approach reveal about the production of this art form and the experiences of those who made it?

Viewing musicians as exploited workers and as beleaguered contractors, helps — I think — contribute to a better understanding of their art form and art more generally, both of which often are removed from the muck of materialist analysis and, instead, analyzed all too subjectively as a “thing in itself,” disengaged from the mode of production and productive forces more generally. Perhaps this subjectivity is understandable given the angelic and melodious sounds produced by these artists, which can easily lure the unwary into thinking there is something “otherworldly” about the process: this is both true — and false.

Certain musical riffs…were drawn from the “rat-tat-tat” of gunshots, a not infrequent sound heard in the often mob-controlled clubs where artists were compelled to perform.

From one angle, creativity and improvisation in jazz appear as tools of musical innovation. But from the perspective of your book, it also seems like these innovative practices were also means of self-preservation for Black musicians in the face of white supremacy.

This is accurate. Take “be-bop” for example, which arises in the 1940s, and is associated with the brilliant creativity of musicians e.g. Charlie “Bird”’ Parker; Dizzy Gillespie; Max Roach; et.al. As I tell the story, this profound musical turn was driven by material forces, including but not limited to the fact that musicians were seeking to develop a musical form that would be difficult for their pale imitators to emulate, as this pilfering was draining their income; simultaneously, in the hothouse of the music that was Manhattan, officialdom was objecting to heterosexual dancing across racial lines and, thus, the music morphed from a “dancing” music to a “listening” music. In the previous decade, I discuss how certain musical riffs on the piano were drawn from the “rat-tat-tat” of gunshots, a not infrequent sound heard in the often mob-controlled clubs where artists were compelled to perform.

How did geopolitical rivalry with the Soviet Union shape the experience of Black jazz artists in the U.S.?

Post-1945, U.S. imperialism found itself in stiff competition with its erstwhile World War II ally in Moscow, as national liberation movements were surging, not least in Africa. As such, Washington found that the better part of wisdom was to march away agonizingly from the more egregious aspects of Jim Crow in order to better compete for “hearts and minds” in this decolonizing world. This leads the U.S. authorities to sponsor “jazz” musicians in concerts abroad with the music said to represent the “freedom” said to inhere in the U.S. version of “democracy.” This fattened the pocketbooks of certain musicians, disseminated further a music that was already “global,” and helped to convince some that these (mostly) Black musicians were symbols of the U.S. — and not schoolchildren in Little Rock being attacked by angry mobs as they sought to desegregate public schools.

How were the working conditions of Black musicians changed by the formal end of Jim Crow?

As Jim Crow retreated, musicians gained more leverage. They became better able to avoid adhesion contracts with unscrupulous bosses and were better able to reclaim a portion of the wealth that their artistry had created.

Why was the international reception of jazz so markedly different from the way it was received domestically, particularly by white audiences in the U.S.?

Your query is harder to answer than it appears at first glance. My previous work has argued that contrary to consensus opinion, the formation of the U.S. in 1776 occurred not least because of a fervent desire to evade the logic of abolition that was growing in London (the 1619 Project just published by mostly Black journalists in the New York Times echoes this thesis). As such, slavery and its complement — hysterically hyperbolic “anti-Negro sentiment” — flourished in the republic and was hardly squashed by the Civil War. Dexter Gordon in Copenhagen; Art Farmer in Vienna; Randy Weston in Morocco; Yusef Lateef in Nigeria; Miles Davis in Paris; Ron Carter in Tokyo — all found more receptive audiences than what they encountered in their homeland, along with more respect for their artistry. The tangled history of the U.S. complicated the republic’s ability to emulate these global trends.

In the introduction of your book you note the difficulty of defining jazz, as well as the resistance of many musicians to do so. After writing Jazz and Justice, would you like to take a stab at it?

Some musicians object to the very term “jazz,” which is why in the book I often use the term accompanied by a bodyguard of quotation marks. The etymology of this word likely emerges from the seamy nature of bordellos and other sites of ill repute, and there are those who take umbrage at the notion that such an elevated art has such disreputable roots. As for a definition of this music itself, which — most likely — was born in the Mississippi River basin in the late 19th century (New Orleans, Memphis, St. Louis), I will point readers to the book itself and the sources upon which I rely.

[Anton Woronczuk is an editor at Truthout.]

Interested readers can purchase a copy of Jazz and Justice: Racism and the Political Economy of the Music from Monthly Review.