“Over 18 years, the United States has spent $4.9 trillion on wars, with only more intractable violence in the Middle East and beyond to show for it,” points out Koshgarian. 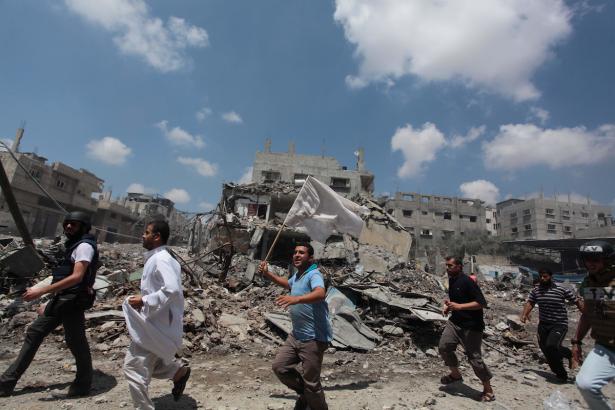 Palestinians in the Shejaiya neighborhood wave a white flag as they flee to safety, on July 20, 2014., Ashraf Amra/APA Images

During the recent Democratic debate in Ohio, Congresswoman Tulsi Gabbard asked Senator Elizabeth Warren if she would join her in calling for an end to “the regime change war in Syria.”

“So, look, I think that we ought to get out of the Middle East,” Warren responded. “I don’t think we should have troops in the Middle East. But we have to do it the right way, the smart way.”

Warren’s answer was enough to rankle Democratic frontrunner Joe Biden. “I was surprised last night in the debate,” he told a crowd in Iowa the next day. “One of my colleagues said we should remove all troops from the Middle East.”

A new report released by the progressive think tank Data for Progress shows that Warren’s sentiment is more in line with voters than Biden’s is. The group polled over 1,000 people on issues of foreign policy. “We found that voters’ attitudes stand in stark contrast to the hesitation demonstrated by elected leaders to enact major shifts in national-security policy,” it concludes, “Many progressive proposals have bipartisan support, and some have particular resonance among Democratic voters.”

Here are some of the report’s major findings:

What about military aid to Israel, the supposed third rail of politics that neither party can effectively challenge? 46% support conditioning aid to Israel in an effort to stop its inhumane treatment of Palestinians. That includes 65% of Democratic voters.

The Israel statistics fall in line with another report that Data for Progress put out last month that generated similar numbers over the topic of leveraging military aid to the country. “These results suggest that Democratic voters are not holding Israel to a different standard than they would hold any other recipient of US military aid dollars,” Emma Saltzberg, a Data Progress fellow who is also a co-founder of the Jewish, anti-occupation group IfNotNow, wrote in announcing those findings. “They also suggest that Democratic politicians who float the possibility of changes to the US–Israel aid relationship do so with the support of their party’s voters.”

Data for Progress isn’t the only group that put out a foreign policy report this week. The Institute for Policy Studies (IPS) released research detailing how Medicare for All could be funded by slashing the United States military budget. Medicare for All was also a hot topic during the debate as Warren and Senator Bernie Sanders were both criticized by the other candidates for endorsing such a plan despite its costs.

Addressing the findings in a New York Times op-ed, IPS’ National Priorities Project director Lindsay Koshgarian writes that the necessary money for Medicare for All could be freed up via moves like a nuclear weapon ban, the end of military partnerships with private contractors, and production cuts for the F-35. “Over 18 years, the United States has spent $4.9 trillion on wars, with only more intractable violence in the Middle East and beyond to show for it,” points out Koshgarian. “That’s nearly the $300 billion per year over the current system that is estimated to cover Medicare for All (though estimates vary). While we can’t un-spend that $4.9 trillion, imagine if we could make different choices for the next 20 years.”

There’s certainly indications that such a plan might be more popular among voters than most lawmakers might think.

Michael Arria is the U.S. correspondent for Mondoweiss.