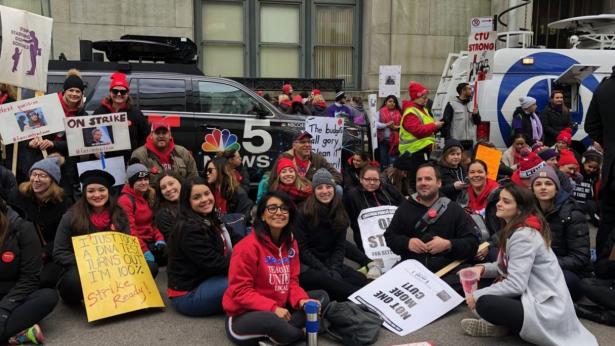 Jendy Barnes (red hat on left) was marching Wednesday near the Board of Trade when someone spit on her and other teachers, she said,Photo: Block Club Chicago

All Organizing is Magic

Echoes of witchcraft in contemporary anti-capitalism.

"There is an America that most people believe in. It is an ideal. It's not a reality yet."

By Elizabeth Anora
October 28, 2019
The Independent

Katie Hill wasn't held accountable for her actions. She was thrown on a pyre for the benefit of men.

As they are attacked by film-makers like Martin Scorsese, are TV and movie superheroes fighting a losing battle against reality?

The Militarization of Everything

Militarism is more than thuggish dictators, predatory weaponry, and steely-eyed troops. There are softer forms of it that are no less significant than the “hard” ones.

When Trump tweets about "civil war," he's echoing books about race wars and nationalist coups that a violent fringe has long cherished.

Not everyone is a fan of the strike — but several people working in the Board of Trade building took their opposition too far Wednesday, teachers say: They spat on picketing teachers.

Long a community with little clout, the state’s renters won a victory with national implications.