Global Left Midweek - Focus: The Left in the EU

The Left in the EU + American Lessons From Labour's Defeat + Fury in India, Algeria and Colombia + Mass Strike in France + Building Democracy in Kurdish Syria 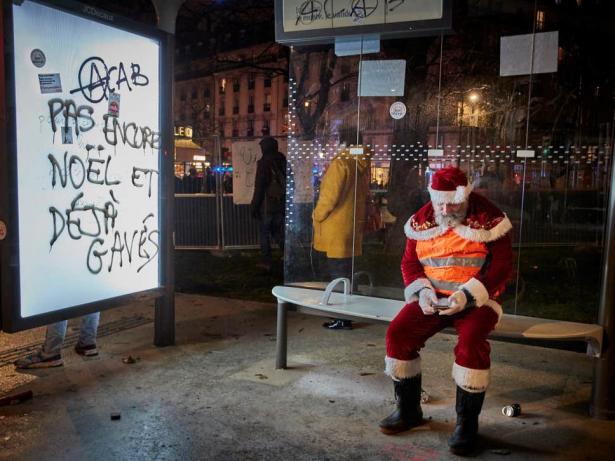 A protester dressed as Santa in a Paris bus shelter with graffiti that reads 'Not yet Christmas and already stuffed' on 17 December,Photo: Getty Images

The European Left is now facing a new turning point, the necessity for a political re-launch. We must now work actively and purposefully towards the cooperation of all left-wing and greens forces in Europe, through struggles and common goals.

This seminar was focused on the results of the European Elections and their impact on the European left. The eDossier contains selected contributions for debate on the prospective European strategy of the left forces.

Portugal's Socialist government, backed by an alliance with the Communist Party and the Left Bloc, have shown that it is possible to implement an effective anti-austerity programme as a member of the EU.

The point is that we need far-reaching measures to tame globalisation. The measures require substantive democracy at the European level—debate and deliberation, and activism, across Europe.

Taking down Macron's government is far more likely to be achieved if protesters join forces with migrants, people of colour and Muslims.

Interviews and case studies give the clearest picture yet of the stated aims of the political project in North and East Syria.