Warren, is a beneficiary of the opening Sanders helped carve for capitalist–critical aspirants to America’s top office. She and Sanders, both enemies of Big Business, are among the top candidates shows how much the politics of capitalism has changed 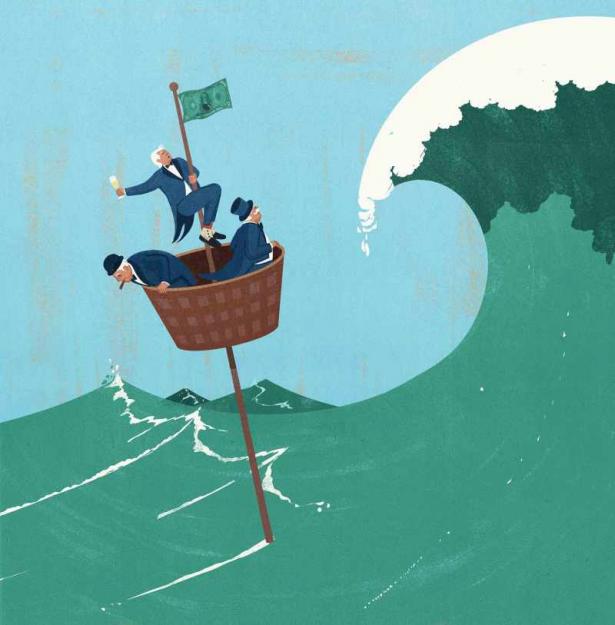 Illustration by Shout for TIME MAgazine,

On March 29, 2003, at a wedding reception in the Harvard Faculty Club, Lawrence W. Reed gave a toast in honor of the friend whom he was serving as best man—one Joseph P. Overton. Overton had worked at Dow Chemical; he had since become an executive at a free-market, small–government think tank in central Michigan. Among his duties at the Mackinac Center for Public Policy was raising money, and in doing so, he had made a brochure that would become his legacy. Overton was trying to describe the role of think tanks in a society, and he posited an idea that would come to be called the Overton window. In a given society, at a given moment, there is a range of policies politically acceptable to the mainstream. (A 70% top tax rate and a 20% top tax rate are both within this window in America today; abolishing taxes is not.) Generally, the theory went, politicians will only propose ideas that fall within the window. It falls to think tanks (and others) to propose unpopular things outside of the window in the hope of shifting the window and making the previously unthinkable achievable. Overton was an ardent libertarian who pushed ideas like school choice—and, according to Reed’s wedding toast, he had on occasion resorted to more extreme methods of moving the window of the possible, “including the time,” Reed recounted that day, “we flew in a Cessna 172 in broad daylight at treetop level 150 miles into war-torn Mozambique to assist armed rebels fighting the Marxist regime there.” Overton died just weeks after his wedding.

Were Overton still alive, he would be pushing 60—and might be aghast to learn that his “window,” having become famous after his death, is now invoked to describe America’s great, unlikely backlash against the system he defended so ardently: capitalism.

A democratic socialist—Bernie Sanders—is among the top contenders to be the next Democratic nominee for U.S. President. His rival and fellow Senator, Elizabeth Warren, is also among the top tier of candidates, declaring herself a capitalist who wishes to transform American capitalism as we know it, with a wealth tax, a Green New Deal and the elimination of private health insurance. A more centrist candidate, Mayor Pete Buttigieg of South Bend, Ind., illustrated the shifting winds when he recently declared that “neo-liberalism is the political–economic consensus that has governed the last 40 years of policy in the U.S. and U.K. Its failure helped to produce the Trump moment. Now we have to replace it with something better.” In 2016, the Democratic Socialists of America (DSA) had 5,000 members; since then, its dues-paying membership has multiplied more than tenfold. This new energy on the left terrifies chief executives and billionaires, and yet many of them have been voicing similar alarms about a crisis of capitalism. Ray Dalio, the billionaire co-chairman of the investment firm Bridgewater Associates, warned in April that America faced a “national emergency” in capitalism’s failure to benefit more people, and he pronounced the American Dream lost. The anti-capitalist impulse has some purchase on the right too. Before he pushed a tax cut that lined the capitalists’ pockets, Donald Trump ran, most improbably, as a Republican skeptical of the financial elite’s loyalty to Americans. On Fox News, Tucker Carlson has entertained a surprising skepticism of capitalist doctrines and said positive things about Warren.

America loves a capitalist reckoning the way the NFL loves Colin Kaepernick. But it is having one anyway. And if this year that reckoning seemed to reach new intensity, it was because the economic precariousness, stalled mobility and gaping social divides that have for years fueled the backlash now had an improbable sidekick: plutocracy itself and the win-win ideology that has governed the past few decades. This year, America’s ultra-elites seemed to bend over backward to lend support to the idea that maybe the system they superintend needs gut renovating. As a political movement bubbled up to challenge their wealth and power, the elite’s own misbehavior trickled down. And where the two met, ideas that once seemed unutterable started, to many, to sound like the future.

History is the story of conditions that long seem reasonable until they begin to seem ridiculous. So it is with America’s present manic hyper-capitalism.

Until recently, it seemed normal that a technological revolution that began with promises of leveled playing fields had culminated in an age of platform monopolies. Normal that businesspeople should try to make as much money as possible by paying as little as possible in taxes and wages, then donate a fraction of the spoils to PR-friendly social causes. Normal that economic security for most Americans was becoming a relic of the past. Normal that people in the street-level marijuana business go to prison while people in the business of selling ads to Russian intelligence go on magazine covers. Normal that bankers could shatter the world economy with their speculating, and that they would be among the few to be made whole after the crisis.

For years, there have been voices trying to denormalize this state. There were protests in Seattle in 1999, there was Occupy in 2011, there was the DSA, there was the World Social Forum to rival the World Economic Forum, there was, eternally, Bernie Sanders saying the exact stuff he is still saying today, there were civic groups trying to organize workers and poor communities, there were outcasts in Silicon Valley warning that Mark Zuckerberg wasn’t really about human connection. But America was in the grips of the ideological consensus that Buttigieg described. Hyper-capitalism was the intellectual stadium in which the country played. There was a left side of the field, more wary of capitalism’s extremes, and a right side of the field, prone to capitalist boosting. But the stadium, as Overton understood, demarcated the boundaries of the debate for most people: Capitalism, more or less as we practice it, is our system, and it is the best system, so how do we tweak it to make it better?

Then, in 2016, something happened. Sanders ran for President. He built a formidable national movement, powered by small donations, and won 22 states—mind you, as a democratic socialist in the United States of America. Sometimes the thing that could never happen happens, and it makes people doubt their sense of reality. And in that election cycle, if Sanders discredited capitalism as a conscious project, his cause received unexpected, unintentional help from the man who would become President. Trump ran as a flamboyant capitalist, wary of certain aspects of capitalism, but promising that his capitalist mind and his capitalist fortune would make him a uniquely gifted, uniquely incorruptible President. When that turned out not to be the case, Trump not only damaged himself but the idea of the selfless billionaire savior too.

The Overton window was moving. Then came the 2018 midterms and a new wave of Democratic -candidates—most prominently, Representative Alexandria Ocasio-Cortez of New York—questioning capitalism–as–capitalism in a way that seemed unfamiliar and fresh. As the 2020 campaign approached, Warren jumped into the race, a beneficiary of the opening Sanders had helped carve for capitalist–critical aspirants to America’s highest office. With her now famous litany of “plans,” Warren detailed an agenda that would put American business in a headlock. That she and Sanders, both veritable enemies of Big Business, are among the top candidates shows how much the politics of capitalism has changed.

[Anand Giridharadas is a TIME editor-at-large and the author of Winners Take All: The Elite Charade of Changing the World, The True American and India Calling. He is also a political analyst for NBC News and teaches writing at NYU.]